The Eastern and Western States of America 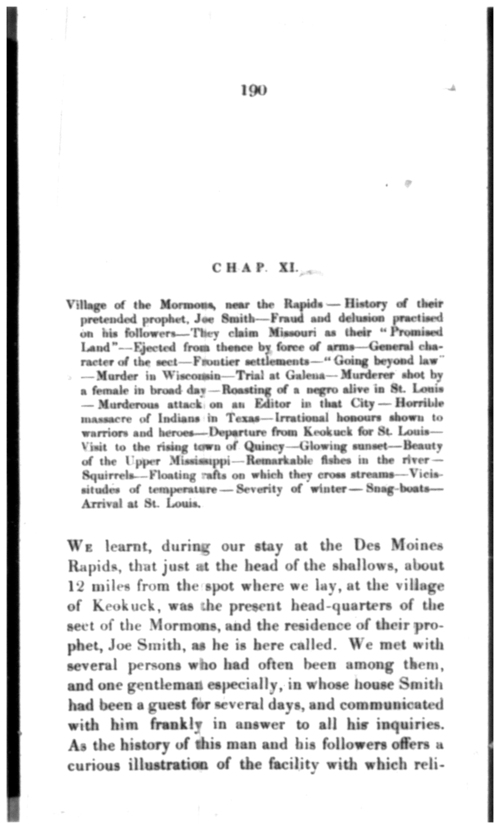 WE learnt, during our stay at the Des Moines Rapids, that just at the head of the shallows, about 12 miles from the spot where we lay, at the village of Keokuck, was the present head-quarters of the sect of the Mormons, and the residence of their prophet, Joe Smith, as he is here called. We met with several persons who had often been among them, and one gentleman especially, in whose house Smith had been a guest for several days, and communicated with him frankly in answer to all his inquiries. As the history of this man and his followers offers a curious illustration of the facility with which reli-[190] gious frauds can be perpetrated in this country, and as several of the facts were new to me, I have thought them worthy of record.

Joe Smith, the Mormon Prophet, as he is styled by his followers, was an educated mechanic, living in the interior of the State of New York, and earning his living by his daily labour. Some few years ago, being then about 30 years of age, he pretended to have discovered, in a mound in that State, a book, composed of a series of leaves or thin plates of gold, clasped together, and on opening which, he found it inscribed with unknown characters. Being unable to decipher them himself, he showed them to others—whom, however, he does not name—and these being equally unable with himself to read them, the book was put by. Shortly after this, he alleges that an angel appeared to him by night, and communicated to him the power of deciphering and interpreting the contents of the whole volume, which he therefore did, with as much expedition as his time would allow. It proved to be, as he says, the lost Book of Mormon, referred to in the Scriptures. The English version of it being thus complete, the angel took away with him to heaven the golden plates, as no longer necessary to be left on earth!

I could not learn that this self-constituted prophet preached any peculiar doctrines beyond those of representing himself as one of God’s Anointed, specially commissioned to lead such as would follow him to a Promised Land, there to build a New Jerusalem; and the necessity of implicit obedience to his commands and interpretations. A number of persons having joined him, professing a full belief [191] in the truth of his story, he came with them westward, and they took up their abode in the State of Missouri, where they purchased some lands at the Government price of 1 ¼ dollar an acre, and began to form a settlement. Not content, however, with occupying what they could buy, and living on the produce of what they could till, they began to preach that Missouri was the Promised Land, covenanted by God to be given to the believers in the Book of Mormon; and that it was their duty, if they could not obtain it peaceably, to take it by force of arms, and to drive out the unbelievers there, as Moses had driven out and extirpated with the edge of the sword the Moabites and Ammonites that opposed his passage through their territories; and as Joshua after him had driven out the Jebusites, the Canaanites, and others, to possess their lands, which the Lord their God had given them.

With this example, and the professed direct inspiration of their Prophet, these deluded people thought there was no sin, but much virtue, in seizing the Promised Land of Missouri as their own, as soon as their force would admit of the attempt. The previous settlers in Missouri, however, who had bought land and improved it before Joe Smith or the Book of Mormon was known to them, did not recognize the heavenly covenant by which they were thus to be robbed of their legal possessions, and therefore they anticipated the Mormonites, by taking up arms and expelling them from the State. This was not done without many a hard struggle, for being all armed, they fought desperately, and many were killed and wounded on either side. [192] The Sheriff of the County in which the first affray occurred, took part with the people of Missouri, and the result was that they were ultimately driven across the river into Illinois, where they now occupy the small town of Commerce, just 12 miles above Keokuck, on the opposite side of the Mississippi, and their number is said to exceed 5,000 persons.

They are described as being averse to labour, which is hardly to be wondered at, if they believe—as they are said to do—that a Promised Land, and one which will yield fruit without much toil, is still in reserve for them. They wear no peculiar dress, use no peculiar phraseology, and do not appear to have any peculiar doctrines, beyond that of believing Joe Smith to be infallible, and therefore worthy of implicit obedience. The Prophet himself, who is now about 40, is described as very ignorant and unprepossessing; but he maintains a grave demeanour, and generally impresses those with whom he converses with a belief that he is sincere in his errors, and deludes himself as well as others. He had lately been on a journey to Washington City, to see the President, and endeavour to prevail on him to redress the grievances of his followers, and obtain for them a restoration to their Promised Land, in the State of Missouri. He represents Mr. Van Buren as being unwilling to take any steps for that purpose; and he attributes this to his fear of offending the people of Missouri, and thus losing the allegiance of that State in his approaching Presidential election. The Prophet therefore assembled his followers on his return, and [193] preached to them a sermon, enjoining the right and duty of resistance to evil-doers, and at the close of it he said that he would give them an account of his visit to Washington, and the failure of his efforts to move the President in their behalf. This he narrated in detail, and then would up by saying, that for himself, he did not desire to dictate to his followers in temporal things, and that they were therefore at liberty to vote for whomsoever he pleased, but that for himself he should vote for General Harrison, and oppose Mr. Van Buren’s re-election with all his might, and they who thought with him might follow his example. . . .