Doctrine of the Mormonites 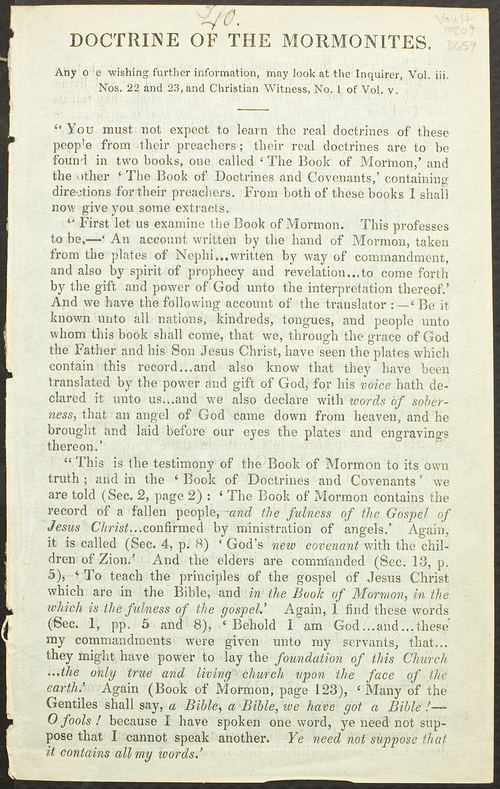 DOCTRINE OF THE MORMONITES.

Any one wishing further information, may look at the Inquirer, Vol. iii. Nos. 22 and 23, and Christian Witness, No. 1 of Vol. v.

“First let us examine the Book of Mormon. This professes to be,—‘An Account written by the hand of Mormon, taken from the plates of Nephi…written by way of commandment, and also by spirit of prophesy and revelation…to come forth by the gift and power of God unto the interpretation thereof.’ And we have the following account of the translator:—‘Be it known unto all nations, kindreds, tongues, and people unto whom this book shall come, that we, through the grace of God the Father and his Son Jesus Christ, have seen the plates which contain this record…and also know that they have been translated by the power of and gift of God, for his voice hath declared it unto us…and we also declare with words of soberness, that an angel of God came down from heaven, and he brought and laid before our eyes the plates the engravings thereon.’

“This is the testimony of the Book of Mormon to its own truth; and in the ‘Book of Doctrines and Covenants’ we are told (Sec. 2, page 2): ‘The Book of Mormon contains the record of a fallen people, and the fulness of the Gospel of Jesus Christ…confirmed by ministration of angels.’ Again, it is called (Sec. 4, p. 8) ‘God’s new covenant with the children of Zion.’ And the elders are commanded (Sec. 13, p.5), ‘To teach the principles of the gospel of Jesus Christ which are in the Bible, and in the Book of Mormon, in the which is the fulness of the gospel.’ Again, I find these words (Sec. 1, pp. 5 and 8), ‘Behold I am God…and…these my commandments were given unto my servants, that…they might have power to lay the foundation of this Church… the only true and living church upon the face of the earth.’ Again (Book of Mormon, page 123), ‘Many of the Gentiles shall say, a Bible, a Bible, we have got a Bible!—O fools! because I have spoken one word, ye need not suppose that I cannot speak another. Ye need not suppose that it contains all my words.’ [1]

“These people then pretend to be apostles and prophets of the Church of the Latter-day Saints, the only true and living Church on the face of the earth; and, as such, they tell us that God has not revealed in the Bible all that is sufficient to salvation, but that they are commissioned to declare a new revelation wherein is the fulness of the Gospel. Now the simple question is, Is this according to Scripture, or is it not? We are told (Romans xvi. 25), that ‘the gospel and preaching of Jesus Christ is according to the revelation of the mystery which was kept secret since the world began, but NOW is made manifest, and by the scriptures of the prophets made known TO ALL NATIONS for the obedience of faith.’ Again (Colossians i. 25), that ‘the dispensation’ to the Apostle Paul was to be made ‘a minister to fulfil [or, fully to preach] the word of God, even the mystery which had been hid from ages and generations, but now is made manifest.’ And the same apostle could say of his ministry, that he had kept back nothing that was profitable unto his hearers, that he had ‘not shunned to declare unto them ALL the counsel of God.’ More than this, Jesus Christ himself declares (John xv. 15) ‘ all things that I have heard of my Father I have made known unto you,’ and he promises (ch. xvi.) to send the Holy Spirit to ‘guide them into all truth to bring all things to remembrance;’ and, according to this promise, we find St. John (1 John ii. 20, 21) writing to ‘ babes in Christ’ in these words, ‘Ye have an unction from the Holy One, and ye know all things. I have not written unto you because ye know not the truth, but because ye know it.’

“Now, here is a very plain case.—Inspired apostles tell us—nay, Christ himself tells us— that the whole counsel of God has been revealed in the Bible, and that the way of salvation is so plain, that even ‘ a babe in Christ’ may know the truth. These men tell us NO—a new revelation is necessary—it has been made—we are the people appointed to bring it, and unless you believe it you must be damned. Now the simple question is, Which shall we believe, St. Paul and St. John, or Joseph Smith,—Jesus Christ, or these mad deceivers?

“But they not only contradict the Bible, but deny that it is the pure word of God, and do away with it altogether! Read their own words (Sec. 47, p. 1): ‘Behold I say unto you that all old covenants have I caused to be done away in this thing, and this is a new and everlasting covenant.’

“Now, we read, Heb. xiii. 20, that the new covenant, which Jesus Christ sealed with his blood, was an ‘everlasting cove- [2] nant;’—his priesthood is said to be ‘for ever,’ and ‘after the power of an endless life.’ The Spirit, through whom he offered himself, is said (vii. 16) to be eternal; the redemption he secured is called ‘everlasting;’ the perfectness of the worshipper, as to conscience, was ‘continual;’ the cleansing was ‘once for all.’ Then what is this new and everlasting covenant that is now brought in by the setting up of this thing—this New Church?

The truth is, the Bible stood in the way of these deceivers, and therefore they were obliged to deny it at any hazard, or they could not have taught the falsehoods they now teach. I bring no charge against these men which I am not able to prove from their own writings. Read the following passage, and judge for yourselves: (page 33) ‘And the angel of the Lord said unto me, It (that is the Bible) contained the plainness of the Gospel of the Lord… …wherefore these things go forth from the Jews in purity; but after they go forth by the hand of the twelve apostles of the Lamb, thou seest the foundation of an abominable church, more abominable than other churches, for behold they have taken away from the gospel many parts which are plain and most precious; nevertheless… …I will manifest myself unto thy seed, that they shall write many things that I shall minister unto them…and in them shall be written my Gospel,’—that is, the Book of Mormon.

“Now, after these men have taken away our Bible, and told us that it is so corrupt that it is no longer God’s word, perhaps you would like to know what doctrines they teach in place of these corrupt doctrines of the Bible. It would be a hateful and a useless task to go through all the folly and blasphemy that is put forth in their books in the shape of doctrine, but I will give a few specimens:—of faith they say, (sec. 1, p. 16) ‘Faith is the principle by which Jehovah works.

Take away this principle, and he would cease to exist. God spake, and worlds came into order by reason of the faith that was in him.’

“So God could not have created the world if he had not faith. Faith in whom? St. Paul says, ‘Faith cometh by hearing,’ and that it is ‘the gift of God;’ but these tell us faith is to be acquired ‘by the sacrifice of all things,’ and by ‘the knowledge of doing what is well-pleasing to God.’ So the Bible tells us, ‘good works are the fruits of faith;’—these say, ‘No, faith is the fruit of good works and mortification.’ Again, the Apostle’s answer to the question ‘What must I do to be saved?’ was, ‘Believe on the Lord Jesus Christ and thou shalt be saved;’ but these lying records [3] teach very different doctrine; they say (sec. 7, p. 9), ‘If we can find a saved being, we shall understand what all others must be to be saved. Now Christ is a saved being. How is he saved? Because he is just and holy.’ Now if this blasphemy means any thing, it must mean that Jesus Christ was saved by his good works, and that every man must be saved by ‘works of righteousness which he has done;’ and, in fact, the whole doctrine of the Book of Mormon virtually does away with the Atonement made by the blood of Christ, and sets up sundry dippings and declarations, and our own good deeds, as our saviours. Take but a few examples: (Book of Mormon, page 619) ‘Be perfected in Christ, and deny yourselves of all ungodliness; and if you do this, and love God with all your hearts, &c., THEN is his grace sufficient for you.’

That is, unless you first save yourselves, God is not able to save you. Again, (page 614) ‘The fulfilling the commandments bringeth remission of sins.’ (Page 160), ‘Continue in fasting and prayer, and endure unto the end, and ye shall be saved.’

“It would be idle to print more of the folly which these deceivers teach in the shape of doctrine; but, after what we have seen, none will be surprised to find both disloyalty and inhumanity in their books. We have been taught to think, ‘Fear God, honour the king,’ ‘Let every one be subject unto the higher powers,’ part of the revealed will of God; but if we follow this new delusion, we must learn a very different doctrine. The Book of Mormon tells us (ch. 13, p. 230), ‘Because all men are not just , it is not expedient that ye should have kings to rule over you.’ ‘Ye cannot dethrone an iniquitous king, save through much contention and bloodshed.’ ‘I desire that this irregularity (between kings and subjects) should be no more in the land, and this land be a land of liberty.’

“We can well believe that these men, who thus preach Treason under the cloak of religion, can uphold Slavery too, when it suits their purpose. (Book of Revelations, sec. 102, 12), ‘We do not believe it right to interfere with bond servants, neither preach the Gospel to, nor baptize them, contrary to the will and wish of their masters….Such interference we believe unlawful, and unjust, and dangerous to the peace of every government allowing human beings to be held in servitude.’ ”