A Letter Written by Professor Anthon 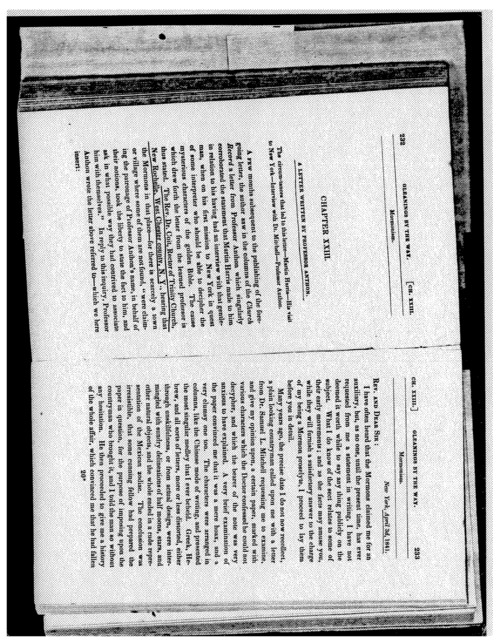 A LETTER WRITTEN BY PROFESSOR ANTHON.

A FEW months subsequent to the publishing of the foregoing letter, the author saw in the columns of the Church Record a letter from Professor Anthon which singularly corroborated the statement that Martin Harris made to him in relation to his having had an interview with that gentleman, when on his first mission to New York in quest of some interpreter who should be able to decipher the mysterious characters of the golden Bible. The cause which drew forth the letter from the learned professor is thus stated. The Rev. Dr. Coit, rector of Trinity Church, New Rochelle, West Chester county, N. Y., hearing that the Mormons in that place— for there is scarcely a town or village where some of them are not found, “were claiming the patronage of Professor Anthon’s name, in behalf of their notions, took the liberty to state the fact to him, and ask in what possible way they had contrived to associate him with themselves.” In reply to this inquiry, Professor Anthon wrote the letter above referred to— which we here insert: [232]

I have often heard that the Mormons claimed me for an auxiliary, but as no one, until the present time, has ever requested from me a statement in writing, I have not deemed it worth while to say any thing publicly on the subject. What I do know of the sect relates to some of their early movements; and as the facts may amuse you, while they will furnish a satisfactory answer to the charge of my being a Mormon proselyte, I proceed to lay them before you in detail.

Many years ago, the precise date I do not now recollect, a plain looking countryman called upon me with a letter from Dr. Samuel L. Mitchell requesting me to examine, and give my opinion upon, a certain paper, marked with various characters which the Doctor confessed he could not decypher, and which the bearer of the note was very anxious to have explained. A very brief examination of the paper convinced me that it was a mere hoax, and a very clumsy one too.

The characters were arranged in columns, like the Chinese mode of writing, and presented the most singular medley that I ever beheld. Greek, Hebrew, and all sorts of letters, more or less distorted, either through unskilfulness, or from actual design, were intermingled with sundry delineations of half moons, stars, and other natural objects, and the whole ended in a rude representation of the Mexican zodiac. The conclusion was irresistible, that some cunning fellow had prepared the paper in question, for the purpose of imposing upon the countryman who brought it, and I told the man so without any hesitation. He then proceeded to give me a history of the whole affair, which convinced me that he had fallen [233] into the hands of some sharper, while it left me in great astonishment at his own simplicity.

The countryman told me that a gold book had been recently dug up in the western or northern part (I forget which), of our state, and he described this book as consisting of many gold plates, like leaves, secured by a gold wire passing through the edge of each, just as the leaves of a book are sewed together, and presented in this way the appearance of a volume. Each plate, according to him, was inscribed with unknown characters, and the paper which he handed me, a transcript of one of these pages. On my asking him by whom the copy was made, he gravely stated, that along with the golden book there had been dug up a very large pair of spectacles! so large in fact that if a man were to hold them in front of his face, his two eyes would merely look through one of the glasses, and the remaining part of the spectacles would project a considerable distance sideways! These spectacles possessed, it seems a very valuable property, of enabling any one who looked through them, (or rather through one of the lenses,) not only to decypher the characters on the plates, but also to comprehend their exact meaning, and be able to translate them!! My informant assured me that this curious property of the spectacles had been actually tested, and found to be true. A young man, it seems, had been placed in the garret of a farm-house, with a curtain before him, and having fastened the spectacles to his head, had read several pages in the golden book, and communicated their contents in writing to certain persons stationed on the outside of the curtain. He had also copied off one page of the book in the original character, which he had in like manner handed over to those who were separated [234] from him by the curtain, and this copy was the paper which the countryman had brought with him. As the golden book was said to contain very great truths, and most important revelations of a religious nature, a strong desire had been expressed by several persons in the countryman’s neighbourhood, to have the whole work translated and published. A proposition had accordingly been made to my informant, to sell his farm, and apply the proceeds to the printing of the golden book, and the golden plates were to be left with him as security until he should be reimbursed by the sale of the work. To convince him more clearly that there was no risk whatever in the matter, and that the work was actually what it claimed to be, he was told to take the paper, which purported to be a copy of one of the pages of the book, to the city of New York, and submit it to the learned in that quarter, who would soon dispel all his doubts, and satisfy him as to the perfect safety of the investment. As Dr. Mitchell was our “Magnus Apollo” in those days, the man called first upon him; but the Doctor, evidently suspecting some trick, declined giving any opinion about the matter, and sent the countryman down to the college, to see, in all probability, what the “learned pundits” in that place would make of the affair. On my telling the bearer of the paper that an attempt had been made to impose on him, and defraud him of his property, he requested me to give him my opinion in writing about the paper which he had shown to me. I did so without any hesitation, partly for the man’s sake, and partly to let the individual “behind the curtain” see that his trick was discovered. The import of what I wrote was, as far as I can now recollect, simply this, that the marks in the paper appeared to be merely an imitation [235] of various alphabetical characters, and had, in my opinion, no meaning at all connected with them.

The countryman then took his leave, with many thanks, and with the express declaration that he would in no shape part with his farm or embark in the speculation of printing the golden book.

The matter rested here for a considerable time, until one day, when I had ceased entirely to think of the countryman and his paper, this same individual, to my great surprise, paid me a second visit. He now brought with him a duodecimo volume, which he said was a translation into English of the “Golden Bible.” He also stated, that notwithstanding his original determination not to sell his farm, he had been induced eventually to do so, and apply the money to the publication of the book, and had received the golden plates as a security for repayment. He begged my acceptance of the volume, assuring me that it would be found extremely interesting, and that it was already “making a great noise” in the upper part of the state. Suspecting now that some serious trick was on foot, and that my plain looking visitor might be in fact a very cunning fellow I declined his present, and merely contented myself with a slight examination of the volume while he stood by. The more I declined receiving it however, the more urgent the man became in offering the book, until at last I told him plainly, that if he left the volume, as he said he intended to do, I should most assuredly throw it after him as he departed. I then asked him how he could be so foolish as to sell his farm and engage in this affair; and requested him to tell me if the plates were really of gold. In answer to this latter inquiry, he said that he had never seen the plates them- [236] selves, which were carefully locked up in a trunk, but that he had the trunk in his possession. I advised him by all means to open the trunk and examine the contents, and if the plates proved to be of gold, which I did not believe at all, to sell them immediately. His reply was, that if he opened the trunk the “curse of heaven would descend upon him and his children.”

“However,” added he, “I will agree to open it, provided you will take the ‘curse of Heaven’ upon yourself for having advised me to the step.” I told him I was perfectly willing to do so, and begged he would hasten home and examine the trunk, for he would find he had been cheated. He promised to do as I recommended, and left me, taking his book with him. I have never seen him since.

Such is a plain statement of all that I know respecting the Mormons. My impression now is, that the plain looking countryman was none other than the prophet Smith himself, who assumed an appearance of great simplicity in order to entrap me, if possible, into some recommendation of his book. That the prophet aided me by his inspiration, in interpreting the volume, is only of the many amusing falsehoods which the Mormonites utter relative to my participation in their doctrines. Of these doctrines I know nothing whatever, nor have I hever heard a single discourse from any one of their preachers, although I have often felt a strong curiosity to became an auditor, since my friends tell that they frequently name me in their sermons, and even go so far as to say that I am alluded to in the prophecies of Scripture!

If what I have here written shall prove of any service in opening the eyes of some of their deluded followers to the real designs of those who profess to be the apostles [237] of Mormonism, it will afford me a satisfaction, equalled, I have no doubt only by that which you yourself will feel on this subject.

I remain very respectfully and truly, your friend,

It will be seen that in the main this tallies exceedingly well with what Harris told the author, in relation to the fact of his interview with Professor Anthon. He kept back in his account of the interview all allusion to the discouragements which the Professor threw upon his enterprise. There can be no doubt but that the person who waited upon Professor Anthon in the manner above stated, was Martin Harris.