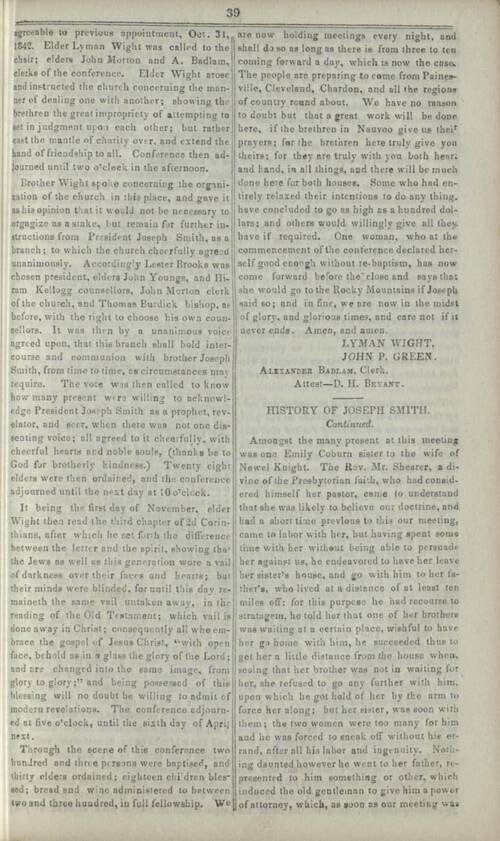 Amongst the many present at this meeting was one Emily Coburn sister to the wife of Newel Knight. The Rev. Mr. Shearer, a divine of the Presbyterian faith, who had considered himself her pastor, came to understand that she was likely to believe our doctrine, and had a short time previous to this our meeting, came to labor with her, but having spent some time with her without being able to persuade her against us, he endeavored to have her leave her sister’s house, and go with him to her father’s, who lived at a distance of at least ten miles off: for this purpose he had recourse to stratagem, he told her that one of her brothers was waiting at a certain place, wishful to have her go home with him, he succeeded thus to get her a little distance from the house when, seeing that her brother was not in waiting for her, she refused to go any further with him, upon which he got hold of her by the arm to force her along; but her sister, was soon with them; the two women were too many for him and he was forced to sneak off without his errand, after all his labor and ingenuity. Nothing daunted however he went to her father, represented to him something or other, which induced the old gentleman to give him a power of attorney, which, as soon as our meeting was [39] over, on the above named Sunday evening, he immediately served upon her and carried her off to her father’s residence, by open violence, against her will. All his labor was in vain however, for the said Emily Coburn, in a short time afterwards, was baptized and confirmed, a member of the “Church of Jesus Christ of Latter-Day Saints.”

However, early on Monday morning we were on the alert, and before our enemies were aware we had repaired the dam, and proceeded to baptize, when the following thirteen persons were baptized under the hands of Oliver Cowdery, viz: Emma Smith, Hezekiah Peck and wife, Joseph Knight and wife, William Stringham and wife, Joseph Knight jr., Aaron Culver and wife, Levi Hall, Polly Knight and Julia Stringham. Before the baptism was entirely finished, the mob began again to collect, and shortly after we had retired, they amounted to about fifty men. They surrounded the house of Mr. Knight (where we had retired to) raging with anger and apparently wishful to commit violence upon us. Some asked us questions, others threatened us, so that we thought it wisdom to leave and go to the house of Newel Knight.

There also they followed us, and it was only by the exercise of great prudence on our part, and reliance on our heavenly Father that they were kept from laying violent hands upon us, and so long as they chose to stay we were obliged to answer them various unprofitable questions, and bear with insults and threatnings without number.

We had appointed a meeting for this evening, for the purpose of attending to the confirmation of those who had been the same morning baptized; the time appointed had arrived, and our friends had nearly all collected together, when to my surprise, I was visited by a constable, and arrested by him on a warrant, on charge of being a disorderly person; of setting the country in an uproar by preaching the Book of Mormon, &c. &c.

The constable informed me (soon after I had been arrested) that the plan of those who had got out the warrant, was to get me into the hands of the mob, who were now lying in ambush for me; but that he was determined to save me from them, as he had found me to be a different sort of person from what I had been represented to him. I soon found that he had told me the truth in this matter, for not far from Mr. Knight’s house, the waggon in which we had set out was surrounded by the mob, who seemed only to await some signal from the constable; but to their great disappointment, he gave the horse the whip and drove me out of their reach. Whilst driving along pretty quickly, one of the waggon wheels came off, which left us, once more, very nearly surrounded by them, as they had come on, in close pursuit, however we managed to get the wheel on again and, again left them behind us. He drove on to the town of South Bainbridge, Chenango county, where he lodged me for the time being, in an upper room of a tavern, and in order that all might be right with himself and with me also, he slept during the night with his feet against the door, and a loaded musket by his side, whilst I occupied a bed which was in the room, he having declared that if we were interrupted unlawfully, that he would fight for me, and defend me as far as in his power.

On the day following a court was convened for the purpose of investigating those charges which had been preferred against me. A great excitement prevailed on account of the scandalous falsehoods which had been circulated, the nature of which will come out in the sequel.

In the maan time, my friend, Joseph Knight, had repaired to two of his neighbors viz: James Davidson and John Reid Esqrs., (respectable farmers; men renowned for their integrity, and well versed in the laws of their country,) and retained them on my behalf during my trial. At length the trial commenced amidst a multitude of spectators who in general evinced a belief that I was guilty of all that had been reported concerning me, and of course were very zealous, that I should be punished according to my crimes. Among many witnesses called up against me, was Mr. Josiah Stoal (of whom I have made mention, as having worked for him some time) and examined to the following effect. Q. Did not the prisoner Joseph Smith have a horse of you? Ans. Yes. Q. Did not he go to you and tell you, that an angel had appeared unto him, and authorised him to get the horse from you? Ans. No, he told me no such story. Q. Well; how had he the horse of you? Ans. He bought him of me, as another man would do. Q. Have you had your pay?

Ans. That is not your business.—The question being again put, the witness replied, “I hold his note for the price of the horse, which I consider as good as the pay; for I am well acquainted with Joseph Smith Jr., and know him to be an honest man; and if he wishes I am ready to let him have another horse on the same terms.”

Mr. Jonathan Thompson was next called up, and examined. Q. Has not the prisoner, Joseph Smith Jr. had a yoke of oxen of you? [40] Ans. Yes. Q. Did he not obtain them of you by telling you that he had a revelation to the effect that he was to have them! Ans. No, he did not mention a word of the kind concerning the oxen; he purchased them the same as another man would.

After a few more such attempts, the court was detained for a time, in order that two young women (daughters to Mr. Stoal) with whom I had at times kept company; might be sent for, in order, if possible to elicit something from them which might be made a pretext against me. The young ladies arrived and were severally examined, touching my character, and conduct in general but particularly as to my behavior towards them both in public and private, when they both bore such testimony in my favor, as left my enemies without a pretext on their account. Several attempt were now made to prove something against me, and even circumstances which were alleged to have taken place in Broom county were brought forward; but these, my lawyers would not here admit of against me, in consequence of which, my persecutors managed to detain the court, until they had succeeded in obtaining a warrant from Broom county, and which warrant they served upon me, at the very moment in which I had been acquitted by this court.