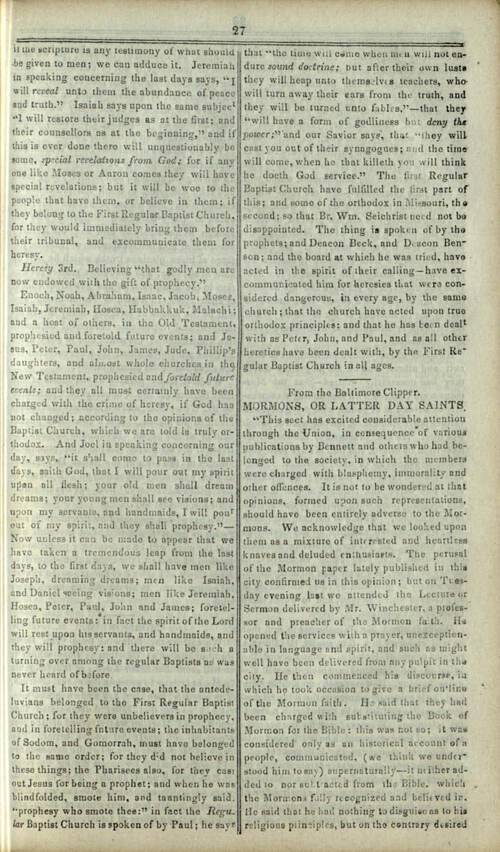 From the Baltimore Clipper.

“This sect has excited considerable attention through the Union, in consequence of various publications by Bennett and others who had belonged to the society, in which the members were charged with blasphemy, immortality and other offences. It is not to be wondered at that opinions, formed upon such representations, should have been entirely adverse to the Mormons. We acknowledge that we looked upon them as a mixture of interested and heartless knaves and deluded enthusiasts. The perusal of the Mormon paper lately published in this city confirmed us in this opinion; but on Tuesday evening last we attended the Lecture or Sermon delivered by Mr. Winchester, a professor and preacher of the Mormon faith. He opened the services with a prayer, unexceptionable in language and spirit, and such as might well have been delivered from any pulpit in the city. He then commenced his discourse, in which he took occasion to give a brief outline of the Mormon faith. He said that they had been charged with substituting the Book of Mormon for the Bible: this was not so; it was considered only as an historical account of a people, communicated, (we think we understood him to say) supernaturally—it neither added to nor subtracted from the Bible which the Mormons fully recognized and believed in. He said that he had nothing to disguise as to his religious principles, but on the contrary desired [27] to make them generally known that they might be correctly judged of. The Mormons were Christians in belief, and looked for the second Advent of Christ—when he shall come, surrounded by the angels of Heaven to dwell in person upon the earth—that he will be met by the spirits of those who are justified, and by the saints who may then dwell on earth—that the earth shall be then purified by fire so as to be made a fit residence for the heavenly host during the term of the Millennium, which will at that time commence—that the signs which are to precede that event are now transpiring, and that, although he did not pretend to determine the precise period of the Millenium, he believed that it was at hand, &c. He quoted various passages from scripture to sustain his opinions—and thought the creation of the heavens and the earth in six days and the hallowing of the seventh as a day of rest, indicated that at the termination of six thousand years, the Sabbath or Millenium of a thousand years shall commence.

He spoke of the various publications of Bennett and others, and of the prejudices which they had necessarily excited—that the Mormons were charged with sanctioning a community of wives and of goods, with polygamy, and various other enormities, not one word of which was true. He had belonged to the society almost from its origin, and had always seen vice discountenanced as in other societies.

Members retained their own property; were confined to one wife; and required to live morally and uprightly, and were subject to be expelled for misconduct. This was the case with Bennett, who had been expelled for his deviations from virtue. In building churches members contributed what they chose voluntarily, in money or labor, and there was no compulsion. The society is governed by rules accessible to all; some of which he read, and to which there could be no exception.

We understood Mr. Winchester to say, that he will endeavor in a few weeks, to deliver a regular course of lectures, explanatory of the belief of the Mormons, in which he will disguise nothing. However men may differ with him, he is evidently sincere in the faith he professes, and is entitled to be treated with respectful attention. Whatever may be the peculiar notions of the sect to which he is attached as to the time and manner of the fulfilment of certain prophecies—or, however erroneous may be the pretended origin of the Book of Mormon, yet, as the Bible is recognized as their guide of Faith, we do not think that the Mormons should be made objects either of ridicule or persecution. We confess that Mr. Winchester has changed our opinion of the sect; for we held them in contempt if not in abhorrence, from the representations we had read of them, whereas, if what Mr. Winchester states be true (and we have no reason to doubt him,) we can recognize them as professing Christians, tinged with peculiarities on particular points.”

We are pleased to find that Elder Winchester is preaching in the city of Baltimore, as he is an intelligent, prudent, and faithful young man, and fully competent to teach the principles of eternal truth; and we are persuaded that if the editor of the “Baltimore Clipper,” (who has spoken so honorably of him and his lecture) should hear him deliver a course of lectures, the force of those glorious truths which he will be able to advance, will produce a greater revolution in his mind than he has yet experienced, or anticipated, in regard to Mormonism; and will be the means of bringing many of the intelligent and respectable citizens of Baltimore to a knowledge of the truth, and to obey those glorious principles which God has revealed for the salvation of the human family.

We have lately perused a “Synopsis of the Holy Scriptures, and Concordance,” published by Br. Winchester, and we must say that it does credit to its author. It is a neat little pocket edition of 256 pages.

It contains copious extracts of the scriptures, on the most prominent articles of the faith of the Latter Day Saints, and an appendix containing an “Epitome of Ecclesiastical History,” from our Savior’s time until the present day.

We have been requested by President Hyrum Smith to insert this notice, ,and say with him that the work will be exceedingly useful to the Biblical Student; to the Elders of the Church of Jesus Christ of Latter Day Saints; to the church in general; and to all serious enquirers after truth.