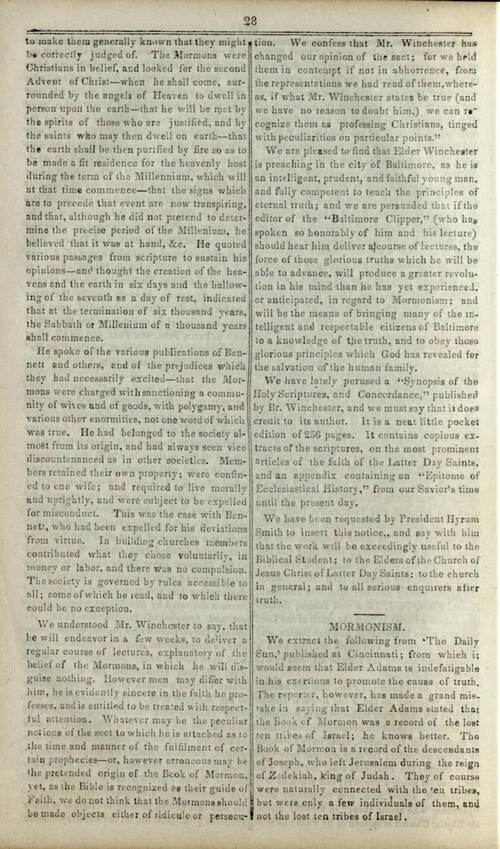 We extract the following from ‘The Daily Sun,’ published at Cincinnati; from which it would seem that Elder Adams is indefatigable in his exertions to promote the cause of truth. The reporter, however, has made a grand mistake in saying that Elder Adams stated that the Book of Mormon was a record of the lost ten tribes of Israel; he knows better. The Book of Mormon is a record of the descendants of Joseph, who left Jerusalem during the reign of Zedekiah, king of Judah. They of course were naturally connected with the ten tribes, but were only a few individuals of them, and not the lost ten tribes of Israel.

“MORMONISM.—On Sunday evening last, Mr. Adams, a Mormon Elder, delivered a lecture at College Hall, to a crowded house He proved that the Book of Mormon was a record of the lost ten tribes of Israel, and that it was spoken of by the prophet Isaiah, and that its appearance would be just before the rebuilding of Jerusalem, and in an age when creeds of all kinds deluged the earth, and when the priests had turned the gospel into a trap to make money by, entirely subverting the order and spirit of the gospel, which is spoken of by the prophets as a deep sleep, from which they are to be awakened by the new Book, the Book of Mormon, which will again renew the spirit of the gospel as preached by the disciples, introducing again the working of miracles, speaking in unknown tongues, revelations from God, and other wonderful knowledge and power supposed to have been taken from the earth for the last eighteen hundred years! He ridiculed with great severity, the creeds of the prevailing denominations of the day, intimated that their upholders were afraid to meet him in debate, claimed the utmost sanctity and holiness for the “Latter Day Saints,” prayed for his congregation to be instructed in the ways of truth, gave newspaper editors and their reporters a slap in the mouth, and said that the self-constituted church authorities would not give up their holds of making money and a good living for the glorious truths of Mormonism without a struggle, pointed to the persecution of his people, and rejoiced exceedingly in the hope he entertained that the world would speedily be regenerated and the glorious truths of the gospel as preached by the Mormons spread to the remotest bounds of the earth.

Whatever this new doctrine may be, it is extremely pleasing to the world, and death to the constituted church creeds of every name but that of Mormon. It is destined to spread, for every man that takes it upon him to speak in its favor, is fully competent to make out his case. One is very much surprised to see with what facility they prove their doctrine from the holy scriptures.

Mr. Adams remarked, that he did not care whether a man believed the Book of Mormon or not, so that he came forward with a broken heart, believing on the Lord Jesus Christ and in baptism for the remission of sins—let him come forth, and if God did not reveal to him the truths of the Book of Mormon, he need not believe it. Mr. Adams is expected to lecture in this city again on Sunday next.”

There are a few editorial remarks in the above that are worthy of our notice. Mr. Curtis states that “whatever this new doctrine is it is extremely pleasing to the world and death to the constituted church creeds of every name but that of Mormon.” We think if Mr. Curtis had travelled with the Saints through their various persecutions he would not have thought the doctrine to be so extremely pleasing; his remarks however are not altogether inapplicable, for whenever truth is presented in its native simplicity to the understanding of man, it recommends itself to their consciences; it vibrates with those chords of honor and integrity that are cherished by every philanthropist and man of truth; and being of a pure and celestial nature, like the sun, it ever shines, and sheds its genial rays on all that comes within its reach; its luminous beams also “bring to light the hidden works of darkness;” and hence, as Mr. Curtis has very properly said, ‘it is death to the constituted church creeds of every name but that of Mormon.” He thinks that “it is destined to spread; for every one that takes upon him to speak in its favor is fully competent to make out his case.” But what is the reason? Is it because they are men of greater erudition, talent, learning, or experience, than other men? No! They are about the same kind of beings as the rest of mankind; why then are they so competent to make out their case? Mr. Curtis says, “one is very much surprised to see with what facility they prove their doctrines from the holy scriptures.”

This then is the secret; their being able to prove their doctrines from the Holy Scriptures, is the reason why they are “fully competent to make out their case;” this is the reason why Mormonism “is destined to spread;” and this is the reason why it is “death to the constituted church creeds of every name.” The bible is presented in its native simplicity, and they either die a natural death, or are killed by the Mormons with the bible.