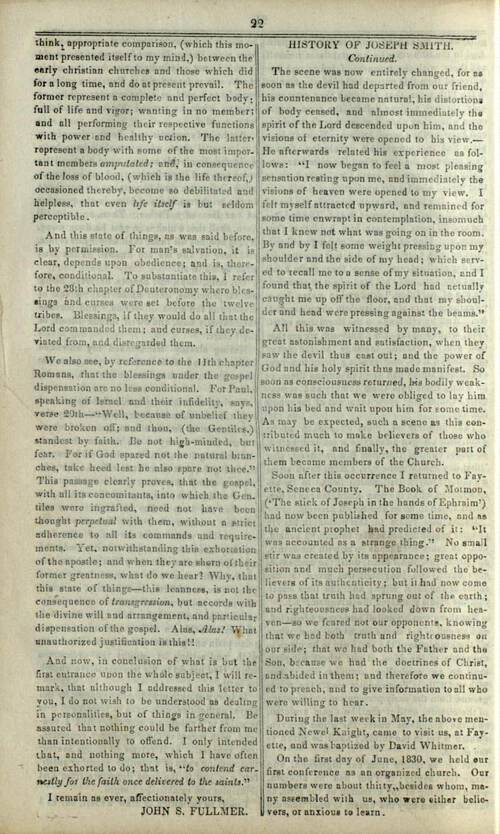 The scene was now entirely changed, for as soon as the devil had departed from our friend, his countenance became natural, his distortions of body ceased, and almost immediately the spirit of the Lord descended upon him, and the visions of eternity were opened to his view.—He afterwards related his experience as follows: “I now began to feel a most pleasing sensation resting upon me, and immediately the visions of heaven were opened to my view. I felt myself attracted upward, and remained for some time enwrapt in contemplation, insomuch that I knew not what was going on in the room. By and by I felt some weight pressing upon my shoulder and the side of my head; which served to recall me to a sense of my situation, and I found that the spirit of the Lord had actually caught me up off the floor, and that my shoulder and head were pressing against the beams.”

All this was witnessed by many, to their great astonishment and satisfaction, when they saw the devil thus cast out; and the power of God and his holy spirit thus made manifest. So soon as consciousness returned, his bodily weakness was such that we were obliged to lay him upon his bed and wait upon him for some time. As may be expected, such a scene as this contributed much to make believers of those who witnessed it, and finally, the greater part of them became members of the Church.

Soon after this occurrence I returned to Fayette, Seneca County. The Book of Mormon, (‘The stick of Joseph in the hands of Ephraim’) had now been published for some time, and as the ancient prophet had predicted of it: “It was accounted as a strange thing.” No small stir was created by its appearance; great opposition and much persecution followed the believers of its authenticity; but it had now come to pass that truth had sprung out of the earth; and righteousness had looked down from heaven—so we feared not our opponents, knowing that we had both truth and righteousness on our side; that we had both the Father and the Son, because we had the doctrines of Christ, and abided in them; and therefore we continued to preach, and to give information to all who were willing to hear.

During the last week in May, the above mentioned Newel Knight, came to visit us, at Fayette, and was baptized by David Whitmer.

On the first day of June, 1830, we held our first conference as an organized church. Our numbers were about thirty,,besides whom, many assembled with us, who were either believers, or anxious to learn. [22]

Having opened by singing and prayer, we partook together of the emblems of the body and blood of our Lord Jesus Christ; we then proceeded to confirm several who had lately been baptized; after which we called out and ordained several to the various offices of the priesthood. Much exhortation and instruction was given, and the Holy Ghost was poured out upon us in a miraculous manner—many of our number prophesied, whilst others had the heavens opened to their view, and were so overcome that we had to lay them on beds, or other convenient places: among the rest was brother Newel Knight, who had to be placed on a bed, being unable to help himself. By his own account of the transaction, he could not understand why we should lay him on the bed, as he felt no sensibility of weakness. He felt his heart filled with love, with glory and pleasure unspeakable, and could discern all that was going on in the room; when, all of a sudden, a vision of futurity burst upon him. He saw there represented, the great work which through my instrumentality was yet to be accomplished. He saw heaven opened, and beheld the Lord Jesus Christ seated at the right hand of the Majesty on high, and had it made plain to his understanding, that the time would come when he would be admitted into his presence, to enjoy his society for ever and ever. When their bodily strength was restored to these brethren, they shouted ‘Hosannas to God and the Lamb,’ and rehearsed the glorious things which they had seen and felt, whilst they were yet in the spirit.

Such scenes as these were calculated to inspire our hearts with joy unspeakable, and fill us with awe and reverence for that Almighty being, by whose grace we had been called to be instrumental in bringing about for the children of men, the enjoyment of such glorious blessings as were now poured out upon us. To find ourselves engaged in the very same order of things as observed by the holy Apostles of old; to realize the importance and solemnity of such proceedings, and to witness and feel with our own natural senses, the like glorious manifestations of the power of the priesthood; the gifts and blessings of the Holy Ghost; and the goodness and condescension of a merciful God, unto such as obey the everlasting gospel of our Lord Jesus Christ, combined to create within us sensations of rapturous gratitude, and inspire us with fresh zeal and energy, in the cause of truth.

Immediately after this conference I returned to my own house, and from thence, (accompanied by my wife, Oliver Cowdery, John Whitmer, and David Whitmer) journeyed again on a visit to Mr. Knight’s of Colesville, Broom County. We found a number in the neighborhood still believing and anxious to be baptized.

We appointed a meeting for the Sabbath, and on the afternoon of Saturday we erected a dam across a stream of water which was convenient, for the purpose of there attending to the ordinance, but during the night a mob collected and tore down our dam, which hindered as of attending to the baptism on the Sabbath.

We afterward found out that this mob had been instigated to this act of molestation by certain sectarian priests of the neighborhood, who began to consider their craft in danger, and took this plan to stop the progress of the truth, and the sequel will show how determinedly they prosecuted their opposition, as well as to how little purpose in the end.

The Sabbath arrived and we held our meeting. Oliver Cowdery preached, and others of us bore testimony to the truth of the Book of Mormon, the doctrine of repentance, baptism for the remission of sins, and laying on of hands for the gift of the Holy Ghost, &c. &c. Amongst our audience were those who had torn down our dam, and who seemed wishful to give us trouble, but did not until after the meeting was dismissed, when they immediately commenced talking to those whom they considered our friends, to try to turn them against us and our doctrines.