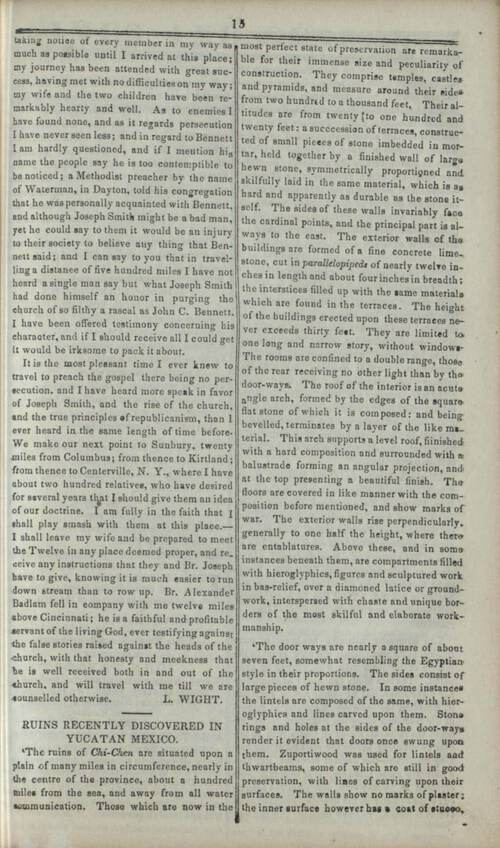 ‘The ruins of Chi-Chen are situated upon a plain of many miles in circumference, nearly in the centre of the province, about a hundred miles from the sea, and away from all water communication. Those which are now in the most perfect state of preservation are remarkable for their immense size and peculiarity of construction. They comprise temples, castles and pyramids, and measure around their sides from two hundred to a thousand feet, Their altitudes are from twenty to one hundred and twenty feet: a succession of terraces, constructed of small pieces of stone imbedded in mortar, held together by a finished wall of large hewn stone, symmetrically proportioned and skilfully laid in the same material, which is as hard and apparently as durable as the stone itself. The sides of these walls invariably face the cardinal points, and the principal part is always to the east. The exterior walls of the buildings are formed of a fine concrete limestone, cut in parallelopipeds of nearly twelve inches in length and about four inches in breadth; the interstices filled up with the same materials which are found in the terraces. The height of the buildings erected upon these terraces never exceeds thirty feet. They are limited to one long and narrow story, without windows. The rooms are confined to a double range, those of the rear receiving no other light than by the door-ways. The roof of the interior is an acute angle arch, formed by the edges of the square flat stone of which it is composed: and being bevelled, terminates by a layer of the like material. This arch supports a level roof, fiinished with a hard composition and surrounded with a balustrade forming an angular projection, and at the top presenting a beautiful finish. The floors are covered in like manner with the composition before mentioned, and show marks of war. The exterior walls rise perpendicularly, generally to one half the height, where there are entablatures. Above these, and in some instances beneath them, are compartments filled with hieroglyphics, figures and sculptured work in bas-relief, over a diamond latice or groundwork, interspersed with chaste and unique borders of the most skilful and elaborate workmanship.

‘The door ways are nearly a square of about seven feet, somewhat resembling the Egyptian style in their proportions. The sides consist of large pieces of hewn stone. In some instances the lintels are composed of the same, with hieroglyphics and lines carved upon them.

Stone rings and holes at the sides of the door-ways render it evident that doors once swung upon them. Zuportiwood was used for lintels and thwartbeams, some of which are still in good preservation, with lines of carving upon their surfaces. The walls show no marks of plaster; the inner surface however has a coat of stucco, [15] upon which colors are laid in fresco, of which sky-blue and light green are the most prominent. Figures of Indian characters can also be faintly traced upon the walls. Columns, capitals and plinths, with many other evidences of large and splendid edifices, are found scattered over the immense plain. Portions of two pillars now remain at the eastern end of an edifice which occupies a space of ground nearly as large as that of Trinity Church-yard. Speculation upon the origin of these ruins I leave to others. The subject is one that should excite the deepest interest in the minds of Americans. It is as yet wrapped in profound mystery, which it will doubtless require many years of laborious research to unfold.’