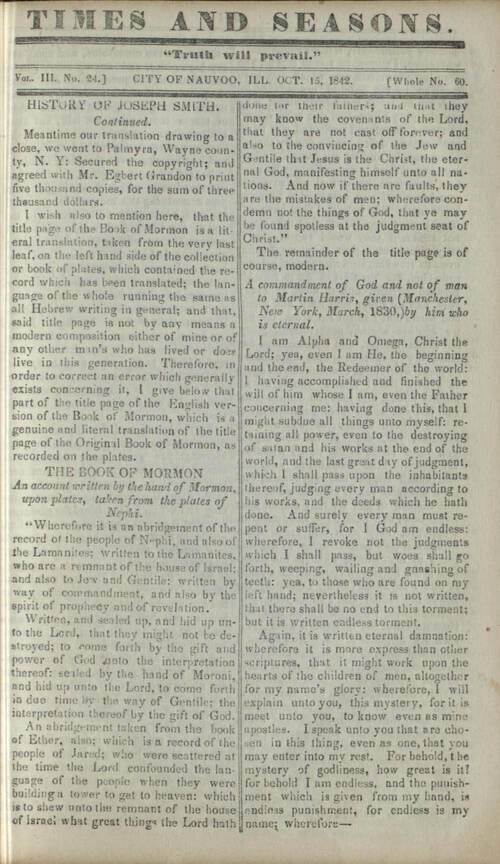 Meantime our translation drawing to a close, we went to Palmyra, Wayne county, N. Y: Secured the copyright; and agreed with Mr. Egbert Grandon to print five thousand copies, for the sum of three thousand dollars.

I wish also to mention here, that the title page of the Book of Mormon is a literal translation, taken from the very last leaf, on the left hand side of the collection or book of plates, which contained the record which has been translated; the language of the whole running the same as all Hebrew writing in general; and that, said title page is not by any means a modern composition either of mine or of any other man’s who has lived or does live in this generation.

THE BOOK OF MORMON

An account written by the hand of Mormon, upon plates, taken from the plates of Nephi.

“Wherefore it is an abridgement of the record of the people of Nephi, and also of the Lamanites; written to the Lamanites, who are a remnant of the house of Israel; and also to Jew and Gentile: written by way of commandment, and also by the spirit of prophecy and of revelation.

An abridgement taken from the book of Ether, also; which is a record of the people of Jared; who were scattered at the time the Lord confounded the language of the people when they were building a tower to get to heaven: which is to shew unto the remnant of the house of Israel what great things the Lord hath done for their father; and that they may know the covenants of the Lord, that they are not cast off forever; and also to the convincing of the Jew and Gentile that Jesus is the Christ, the eternal God, manifesting himself unto all nations. And now if there are faults, they are the mistakes of men; wherefore condemn not the things of God, that ye may be found spotless at the judgment seat of Christ.”

The remainder of the title page is of course, modern.

A commandment of God and not of man to Martin Harris, given ( Manchester, New York, March, 1830,) by him who is eternal.

I am Alpha and Omega, Christ the Lord; yea, even I am He, the beginning and the end, the Redeemer of the world: I having accomplished and finished the will of him whose I am, even the Father concerning me: having done this, that I might subdue all things unto myself; retaining all power, even to the destroying of satan and his works at the end of the world, and the last great day of judgment, which I shall pass upon the inhabitants thereof, judging every man according to his works, and the deeds which he hath done. And surely every man must repent or suffer, for I God am endless: wherefore, I revoke not the judgments which I shall pass, but woes shall go forth, weeping, wailing and gnashing of teeth: yea, to those who are found on my left hand; nevertheless it is not written, that there shall be no end to this torment; but it is written endless torment.

Again, it is written eternal damnation: wherefore it is more express than other scriptures, that it might work upon the hearts of the children of men, altogether for my name’s glory: wherefore, I will explain unto you, this mystery, for it is meet unto you, to know even as mine apostles. I speak unto you that are chosen in this thing, even as one, that you may enter into my rest. For behold, the mystery of godliness, how great is it? for behold I am endless, and the punishment which is given from my hand, is endless punishment, for endless is my name; wherefore— [943]

Eternal punishment} Endless punishment is God’s punishment: is God’s punishment: wherefore, I command you to repent, and keep the commandments which you have received by the hand of my servant Joseph Smith, jr. in my name: and it is by my almighty power that you have received them: therefore I command you to repent, repent, lest I smite you by the rod of my mouth, and by my wrath, and by my anger, and your sufferings be sore: how sore you know now! how exquisite you know not! yea, how hard to bear you know not! For behold, I God have suffered these things for all, that they might not suffer, if they would repent, but if they would not repent, they must suffer even as I: which suffering caused myself, even God, the greatest of all to tremble because of pain, and to bleed at every pore, and to suffer both body and spirit: and would that I might not drink the bitter cup and shrink: nevertheless, glory be to the Father, and I partook and finished my preparations unto the children of men: wherefore, I command you again to repent lest I humble you by my almighty power, and that you confess your sins lest you suffer these punishments of which I have spoken, of which is the smallest, yea, even in the least degree you have tasted at the time I withdrew my Spirit. And I command you, that you preach nought but repentance; and show not these things unto the world until it is wisdom in me; for they cannot bear meat uow, but milk they must receive: wherefore, they must not know these things lest they perish: learn of me, and listen to my words; walk in the meekness of my Spirit and you shall have peace in me: I am Jesus Christ: I came by the will of the Father, and I do his will.

Behold, this is a great, and the last commandment which I shall give unto you concerning this matter: for this shall suffice for thy daily walk even unto the end of thy life. And misery thou shalt receive, if thou wilt slight these counsels; yea, even destruction of thyself and property.

Impart a portion of thy property; yea, even part of thy lands and all save the support of thy family. Pay the debt thou hast contracted with the printer. Release thyself from bondage. Leave thy house and home, except when thou shalt desire to see thy family. And speak freely to all: yea, preach, exhort, declare the truth, even with a loud voice; with a sound of rejoicing, crying hosanna! hosanna! blessed be the name of the Lord God.

Pray always and I will pour out my Spirit upon you, and great shall be your blessing: yea even more than if you should obtain treasures of earth, and corruptibleness to the extent thereof.

Behold, canst thou read this without rejoicing and lifting up thy heart for gladness; or canst thou run about longer as a blind guide; or canst thou be humble and meek and conduct thyself wisely before me: yea, come unto me thy Savior. Amen.

Whilst the Book of Mormon was in the hands of the printer, we still continued to bear testimony, and give information, as far as we had opportunity; and also made known to our brethren, that we had received commandment to organize the church, and accordingly we met together for that purpose, at the house of the above mentioned Mr. Whitmer (being six in number) on Tuesday the sixth day of April, A. D. one thousand, eight hundred and thirty.

Having opened the meeting by solemn prayer to our heavenly Father we proceeded, (according to previous commandment) to call on our brethren to know whether they accepted us as their teachers in the things of the kingdom of God, and whether they were satisfied that we[944] should proceed and be organized as a church according to said commandment which we had received. To these they consented by an unanimous vote. I then laid my hands upon Oliver Cowdery and ordained him an elder of the “Church of Jesus Christ of Latter Day Saints.” After which he ordained me also to the office of an elder of said church. We then took bread, blessed it, and break it with them, also wine, blessed it, and drank it with them. We then laid our hands on each individual member of the church present that they might receive the gift of the Holy Ghost, and be confirmed members of the church of Christ. The Holy Ghost was poured out upon us to a very great degree. Some prophesied, whilst we all praised the Lord and rejoiced exceedingly. Whilst yet together I received the following commandment.

Behold there shall be a record kept among you, and in it thou shalt be called a seer, a translator, a prophet, an apostle of Jesus Christ, an elder of the church through the will of God and the Father, and the grace of your Lord Jesus Christ; being inspired of the Holy Ghost to lay the foundation thereof, and to build it up unto the most holy faith; which church was organized and established, in the year of your Lord eighteen hundred and thirty, in the fourth month, and on the sixth day of the month, which is called April.

Wherefore, meaning the church, thou shalt give heed unto all his words, and commandments, which he shall give unto you, as he receiveth them, walking in all holiness before me: for his word ye shall receive, as if from mine own mouth, in all patience and faith; for by doing these things, the gates of hell shall not prevail against you: yea, and the Lord God will disperse the powers of darkness from before you; and cause the heavens to shake for your good, and his name’s glory.—For thus saith the Lord God, him have I inspired to move the cause of Zion in mighty power for good; and his diligence I know, and his prayers I have heard: yea, his weeping for Zion I have seen, and I will cause that he shall mourn for her no longer, for his days of rejoicing are come unto the remission of his sins, and the manifestations of my blessings upon his works.

For behold, I will bless all those who labor in my vineyard, with a mighty blessing, and they shall believe on his words, which are given him through me, by the Comforter, which manifesteth that Jesus was crucified by sinful men for the sins of the world; yea, for the remission of sins unto the contrite heart. Wherefore, it behooveth me, that he should be ordained by you, Oliver Cowdery, mine apostle; this being an ordinance unto you, that you are an elder under his hand, he being the first unto you, that you might be an elder unto this church of Christ, bearing my name; and the first preacher of this church, unto the church, and before the world; yea, before the Gentiles: yea, and thus saith the Lord God. lo, lo to the Jews, also. Amen.