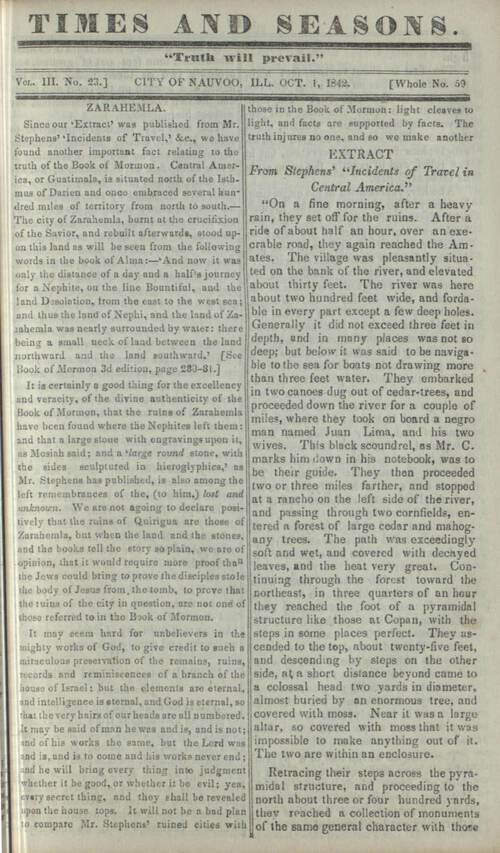 Since our ‘Extract’ was published from Mr. Stephens’ ‘Incidents of Travel,’ &c., we have found another important fact relating to the truth of the Book of Mormon. Central America, or Guatimala, is situated north of the Isthmus of Darien and once embraced several hundred miles of territory from north to south.—The city of Zarahemla, burnt at the crucifixion of the Savior, and rebuilt afterwards, stood upon this land as will be seen from the following words in the book of Alma:—’And now it was only the distance of a day and half’s journey for a Nephite, on the line Bountiful, and the land Desolation, from the east to the west sea; and thus the land of Nephi, and the land of Zarahemla was nearly surrounded by water: there being a small neck of land between the land northward and the land southward.’ [See Book of Mormon 3d edition, page 280–81.]

It is certainly a good thing for the excellency and veracity, of the divine authenticity of the Book of Mormon, that the ruins of Zarahemla have been found where the Nephites left them: and that a large stone with engravings upon it, as Mosiah said; and a ‘ large round stone, with the sides sculptured in hieroglyphics,’ as Mr. Stephens has published, is also among the left remembrances of the, (to him,) lost and unknown. We are not agoing to declare positively that the ruins of Quirigua are those of Zarahemla, but when the land and the stones, and the books tell the story so plain, we are of opinion, that it would require more proof than the Jews could bring to prove the disciples stole the body of Jesus from the tomb, to prove that the ruins of the city in question, are not one of those referred to in the Book of Mormon.

It may seem hard for unbelievers in the mighty works of God, to give credit to such a miraculous preservation of the remains, ruins, records and reminiscences of a branch of the house of Israel: but the elements are eternal, and intelligence is eternal, and God is eternal, so that the very hairs of our heads are all numbered. It may be said of man he was and is, and is not; and of his works the same, but the Lord was and is, and is to come and his works never end; and he will bring every thing into judgment whether it be good, or whether it be evil; yea, every secret thing, and they shall be revealed upon the house tops. It will not be a bad plan to compare Mr. Stephens’ ruined cities with those in the Book of Mormon: light cleaves to light, and facts are supported by facts. The truth injures no one, and so we make another

From Stephens’ “Incidents of Travel in Central America.”

“On a fine morning, after a heavy rain, they set off for the ruins. After a ride of about half an hour, over an execrable road, they again reached the Amates. The village was pleasantly situated on the bank of the river, and elevated about thirty feet. The river was here about two hundred feet wide, and fordable in every part except a few deep holes. Generally it did not exceed three feet in depth, and in many places was not so deep; but below it was said to be navigable to the sea for boats not drawing more than three feet water. They embarked in two canoes dug out of cedar-trees, and proceeded down the river for a couple of miles, where they took on board a negro man named Juan Lima, and his two wives. This black scoundrel, as Mr. C. marks him down in his notebook, was to be their guide. They then proceeded two or three miles farther, and stopped at a rancho on the left side of the river, and passing through two cornfields, entered a forest of large cedar and mahogany trees. The path was exceedingly soft and wet, and covered with decayed leaves, and the heat very great. Continuing through the forest toward the northeast, in three quarters of an hour they reached the foot of a pyramidal structure like those at Copan, with the steps in some places perfect. They ascended to the top, about twenty-five feet, and descending by steps on the other side, at a short distance beyond came to a colossal head two yards in diameter, almost buried by an enormous tree, and covered with moss. Near it was a large altar, so covered with moss that it was impossible to make anything out of it. The two are within an enclosure.

Retracing their steps across the pyramidal structure, and proceeding to the north about three or four hundred yards, they reached a collection of monuments of the same general character with those [927] at Copan, but twice or three times as high.

The first is about twenty feet high, five feet six inches on two sides, and two feet eight on the other two. The front represents the figure of a man, well preserved; the back that of a woman, much defaced. The sides are covered with hieroglyphics in good preservation, but in low relief, and of exactly the same style as those at Copan.

Another, represented in the engraving, is twenty-three feet out of the ground, with figures of men on the front and back, and hieroglyphics in low relief on the sides, and surrounded by a base projecting fifteen or sixteen feet from it.

At a short distance, standing in the same position as regards the points of the compass, is an obelisk or carved stone, twenty-six feet out of the ground, and probably six or eight feet under, which is represented in the engraving opposite. It is leaning twelve feet two inches out of the perpendicular, and seems ready to fall, which is probably prevented only by a tree that has grown up against it and the large stones around the base. The side toward the ground represents the figure of man, very perfect and finely sculptured. The upper side seemed the same, but was so hidden by vegetation as to make it somewhat uncertain. The other two contain hieroglyphics in low relief. In size and sculpture this is the finest of the whole.

A statue ten feet high is lying on the ground, covered with moss and herbage, and another about the same size lies with its face upward.

There are four others erect, about twelve feet high, but not in a very good state of preservation, and several altars so covered with herbage that it was difficult to ascertain their exact form. One of them is round, and situated on a small elevation within a circle formed by a wall of stones. In the centre of the circle, reached by descending very narrow steps, is a large round stone, with the sides sculptured in hieroglyphics, covered with vegetation, and supported on what seemed to be two colossal heads.

These are all at the foot of a pyramidal wall, near each other, and in the vicinity of a creek which empties into the Motagua. Besides these they counted thirteen fragments, and doubtless many others may yet be discovered.

At some distance from them is another monument, nine feet out of ground, and probably two or three under, with the figure of a woman on the front and back, and the two sides richly ornamented, but without hieroglyphics.

The next day the negro promised to show Mr. C. eleven square columns higher than any he had seen, standing in a row at the foot of a mountain; but after dragging him three hours through the mud, Mr. C. found by the compass that he was constantly changing his direction; and as the man was armed with pistols, notoriously a bad fellow, and indignant at the owners of the land for coming down to look after their squatters, Mr. C. became suspicious of him, and insisted upon returning. The Payes were engaged with their own affairs, and having no one to assist him, Mr. Catherwood was unable to make any thorough exploration or any complete drawings.

The general character of these ruins is the same as at Copan. The monuments are much larger, but they are sculptured in lower relief, less rich in design, and more faded and worn, probably being of a much older date.

Of one thing there is no doubt: a large city once stood there: its name is lost, its history unknown; and, except for a notice taken from Mr. C.’s notes, and inserted by the Senores Payes in a Guatimala paper after the visit, which found its way to this country and Europe, no account of its existence has ever before been published. For centuries it has lain as completely buried as if covered with the lava of Vesuvius. Every traveller from Yzabal to Guatimala has passed within three hours of it; we ourselves had done the same; and yet there it lay, like the rock-built city of Edom, unvisited, unsought, and utterly unknown.”