Millennial Star A Lover of Truth 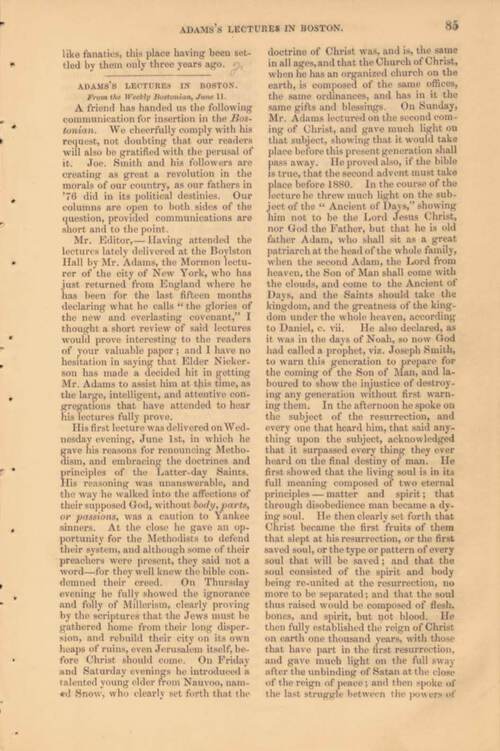 From the Weekly Bostonian, June 11.

A friend has handed us the following communication for insertion in the Bostonian. We cheerfully comply with his request, not doubting that our readers will also be gratified with the perusal of it. Joe. Smith and his followers are creating as great a revolution in the morals of our country, as our fathers in ’76 did in its political destinies.

Our columns are open to both sides of the question, provided communications are short and to the point.

Mr. Editor,—Having attended the lectures lately delivered at the Boylston Hall by Mr. Adams, the Mormon lecturer of the city of New York, who has just returned from England where he has been for the last fifteen months declaring what he calls “the glories of the new and everlasting covenant,” I thought a short review of said lectures would prove interesting to the readers of your valuable paper; and I have no hesitation in saying that Elder Nickerson has made a decided hit in getting Mr. Adams to assist him at this time, as the large, intelligent, and attentive congregations that have attended to hear his lectures fully prove.

His first lecture was delivered on Wednesday evening, June 1st, in which he gave his reasons for renouncing Methodism, and embracing the doctrines and principles of the Latter-day Saints. His reasoning was unanswerable, and the way he walked into the affections of their supposed God, without body, parts, or passions, was a caution to Yankee sinners. At the close he gave an opportunity for the Methodists to defend their system, and although some of their preachers were present, they said not a word—for they well knew the bible condemned their creed. On Thursday evening he fully showed the ignorance and folly of Millerism, clearly proving by the scriptures that the Jews must be gathered home from their long dispersion, and rebuild their city on its own heaps of ruins, even Jerusalem itself, before Christ should come. On Friday and Saturday evenings he introduced a talented young elder from Nauvoo, named Snow, who clearly set forth that the doctrine of Christ was, and is, the same in all ages, and that the Church of Christ, when he has an organized church on the earth, is composed of the same offices, the same ordinances, and has in it the same gifts and blessings. On Sunday, Mr. Adams lectured on the second coming of Christ, and gave much light on that subject, showing that it would take place before this present generation shall pass away. He proved also, if the bible is true, that the second advent must take place before 1880. In the course of the lecture he threw much light on the subject of the “Ancient of Days,” showing him not to be the Lord Jesus Christ, nor God the Father, but that he is old father Adam, who shall sit as a great patriarch at the head of the whole family, when the second Adam, the Lord from heaven, the Son of Man shall come with the clouds, and come to the Ancient of Days, and the Saints should take the kingdom, and the greatness of the kingdom under the whole heaven, according to Daniel, c. vii. He also declared, as it was in the days of Noah, so now God had called a prophet, viz. Joseph Smith, to warn this generation to prepare for the coming of the Son of Man, and laboured to show the injustice of destroying any generation without first warning them. In the afternoon he spoke on the subject of the resurrection, and every one that heard him, that said anything upon the subject, acknowledged that it surpassed every thing they ever heard on the final destiny of man.

He first showed that the living soul is in its full meaning composed of two eternal principles—matter and spirit; that through disobedience man became a dying soul. He then clearly set forth that Christ became the first fruits of them that slept at his resurrection, or the first saved soul, or the type or pattern of every soul that will be saved; and that the soul consisted of the spirit and body being re-united at the resurrection, no more to be separated; and that the soul thus raised would be composed of flesh, bones, and spirit, but not blood. He then fully established the reign of Christ on earth one thousand years, with those that have part in the first resurrection, and gave much light on the full sway after the unbinding of Satan at the close of the reign of peace; and then spoke of the last struggle between the powers of [85] darkness and of light, when death itself shall be conquered and immortality alone endure. When he came to dwell on the second resurrection, the new heavens and the new earth, the whole congregation seemed for a moment to forget that they were listening to a poor despised Latter-day Saint or Mormon, and tears of joy fell from their eyes in abundance, that plainly indicated they were wrapped up in the subject before them. He then sweetly spoke of the bringing back of the tree of life, that caused many hearts to rejoice.

In the evening he preached on the reorganization of the Church of Christ and the marriage supper of the Lamb, showing that the Church of Christ had been disorganized and driven in the wilderness, and the priesthood or authority by which men act in the name of Jesus Christ had been caught up unto the throne of God, until the dispensation of the fulness of times should be ushered in by the ministry of angels in fulfilment of many prophecies of the scriptures. He then set forth the scarlet coloured beast and her daughters, who compose the present sectarian world. He also showed that every sect on earth at the present time received their priesthood or authority through the Church of Rome or nowhere, for they all deny a later revelation than eighteen hundred years ago.

He then appealed to the people, declaring that the Latter-day Saints were the only people on earth that believed in revelations in this age, and that they were the only society on earth that were contending for the faith once delivered to the saints—and that the sects of the present time plainly told the people that the gifts of God could not be enjoyed, “for they were all done away in this enlightened age.” He then declared that God had, in fulfilment of his word, reorganized the church with all the offices, ordinances, gifts, and blessings, according to the New Testament pattern; that the bride, the Lamb’s wife, that is the church, should make herself ready to enter in at the marriage supper of the Lamb.

At the close a gentleman arose and told Mr. Adams that if he would work a miracle he would believe and be baptized, for all the servants that God ever sent worked miracles to convince the people. Mr. Adams then arose and said he thought God had sent many prophets that did not work miracles, and named Noah and about a dozen others; he then showed that Christ said a wicked and an adulterous generation seek after a sign— that the devil was the first sign-seeker in the days of Christ. He then held up the bible and said, if the gentleman would show him one place in the New Testament that a servant of God ever gave a sign to make a man believe, he would do the same sign forthwith—this the gentleman failed to do, and so the matter ended. In conclusion, I must say, that notwithstanding I am no Mormon, yet as far as I have heard them, they preach the truth.

A LOVER OF TRUTH