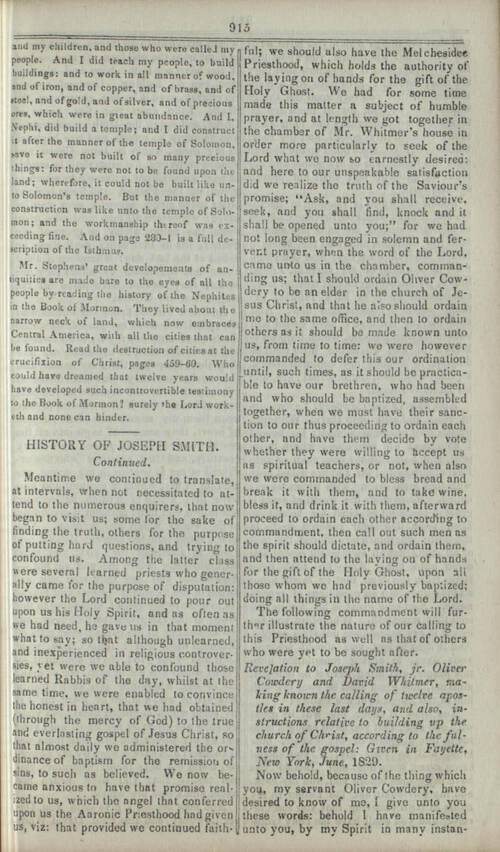 Meantime we continued to translate, at intervals, when not necessitated to attend to the numerous enquirers, that now began to visit us; some for the sake of finding truth, others for the purpose of putting hard questions, and trying to confound us. Among the latter class were several learned priests who generally came for the purpose of disputation: however the Lord continued to pour out upon us his Holy Spirit, and as often as we had need, he gave us in that moment what to say; so that although unlearned, and inexperienced in religious controversies, yet were we able to confound those learned Rabbis of the day, whilst at the same time, we were able to convince the honest in heart, that we had obtained (through the mercy of God) to the true and everlasting gospel of Jesus Christ, so that almost daily we administered the ordinances of baptism for the remission of sins, to such as believed. We now became anxious to have that promise realized to us, which the angel that conferred upon us the Aaronic Priesthood had given us, viz: that provided we continued faithful; we should also have the Melchesidec Priesthood, which holds the authority of the laying on of hands for the gift of the Holy Ghost. We had for some time made this matter a subject of humble prayer, and at length we got together in the chamber of Mr. Whitmer’s house in order more particularly to seek of the Lord what we now so earnestly desired: and here to our unspeakable satisfaction did we realize the truth of the Saviour’s promise; “Ask, and you shall receive, seek, and you shall find, knock and it shall be opened unto you;” for we had not long been engaged in solemn and fervent prayer, when the word of the Lord, came unto us in the chamber, commanding us; that I should ordain Oliver Cowdery to be an elder in the church of Jesus Christ, and that he also should ordain me to the same office, and then to ordain others as it should be made known unto us, from time to time: we were however commanded to defer this our ordination until, such times, as it should be practicable to have our brethren, who had been and who should be baptized, assembled together, when we must have their sanction to our thus proceeding to ordain each other, and have them decide by vote whether they were willing to accept us as spiritual teachers, or not, when also we were commanded to bless bread and break it with them, and to take wine, bless it, and drink it with them, afterward proceed to ordain each other according to commandment, then call out such men as the spirit should dictate, and ordain them, and then attend to the laying on of hands for the gift of the Holy Ghost, upon all those whom we had previously baptized; doing all things in the name of the Lord.

The following commandment will further illustrate the nature of our calling to this Priesthood as well as that of others who were yet to be sought after.

Revelation to Joseph Smith, jr. Oliver Cowdery and David Whitmer, making known the calling of the twelve apostles in these last days, and also, instructions relative to building up the church of Christ, according to the fulness of the gospel: Given in Fayette, New York, June, 1829.

Now behold, because of the thing which you, my servant Oliver Cowdery, have desired to know of me, I give unto you these words: behold I have manifested unto you, by my Spirit in many instances, that the things which you have written are true: wherefore you know that they are true; and if you know that they are true, behold I give unto you a commandment, that you rely upon the things which are written; for the them are all things written concerning the foundation of my church, my gospel and my rock; wherefore, if you shall build up my church upon the foundation of my gospel and my rock, the gates of hell shall not prevail against you.

Behold the world is ripening in iniquity, and it must needs be, that the children of men are stirred up unto repentance, both the Gentiles, and also the house of Israel: wherefore as thou hast been baptized by the hand of my servant, Joseph Smith, jr. according to that which I have commanded him, he hath fulfilled the thing which I command him. And now marvel not that I have called him unto mine own purpose, which purpose is known in me: wherefore if he shall be diligent in keeping my commandments, he shall be blessed unto eternal life, and his name is Joseph.

And now Oliver Cowdery, I speak unto you, and also unto David Whitmer, by the way of the commandment: for behold I command all men every where to repent, and I speak unto you, even as unto Paul mine apostle, for you are called even with that same calling with which he was called. Remember the worth of souls is great in the sight of God: for behold the Lord your Redeemer suffered death in the flesh: wherefore he suffered the pain of all men, that all men might repent and come unto him. And he hath risen again from the dead, that he might bring all men unto him on conditions of repentance. And how great is his joy in the soul that repententh.

And now if your joy will be great with one soul, that you have brought unto me in the kingdom of my Father, how great will be your joy, if you should bring many souls unto me?

Behold you have my gospel before you, and my rock, and my salvation: ask the Father in my name in faith believing that you shall receive, and you shall have the Holy Ghost which manifesteth all things, which is expedient unto the children of men. And if you have not faith, hope and charity, you can do nothing. Contend against no church, save it be the church of the devil. Take upon you the name of Christ, and speak the truth in soberness, and as many as repent, and are baptized in my name, which is Jesus Christ, and endure to the end, the same shall be saved. Behold Jesus Christ is the name which is given of the Father, and there is none other name given whereby man can be saved: wherefore all men must take upon them the name which is given of the Father, for in that name shall they be called at the last day: wherefore if they know not the name by which they are called, they cannot have place in the kingdom of my Father.

And now behold, there are others who are called to declare my gospel, both unto Gentile and unto Jew: yea, even twelve: and the twelve shall be my disciples, and they shall take upon them my name: and the twelve are they who shall desire to take upon them my name, with full purpose of heart, they are called to go into all the world to preach my gospel unto every creature, and they are they who are ordained of me to baptize in my name, according to that which is written; and you have that which is written before you: wherefore you must perform it according to the words which are written. And now I speak unto the twelve: behold my grace is sufficient for you: you must walk uprightly before me and sin not.— And behold you are they who are ordained of me to ordain priests and teachers to declared my gospel, according to the power of the Holy Ghost which is in you, and according to the called and gifts of God unto men: and I Jesus Christ, your Lord and your God, have spoken it.— These words are not of men, nor of man, but of me: wherefore you shall testify they are of me and not man; for it is my voice which speaketh them unto you: for they are given by my Spirit unto you: and by my power you can read them one to another; and save it were by my power, you could not have them: wherefore you can testify that you have heard my voice, and know my words.

And now behold I give unto you, Oliver Cowdery, and also unto David Whitmer, that you shall search out the twelve who shall have the desires of which I have spoken; and by their desires and their works, you shall know them: and when you have found them you shall show these things unto them. And you shall fall down and worship the Father in my name: and you must preach unto the world, saying, you must repent and be baptized in the name of Jesus Christ: for all men must repent and be baptized; and not only men, but women and children, who have arriven to the years of accountability.

And now, after that you have received this, you must keep my commandments in all things: and by your hands I will work a marvelous work among the children of men, unto the convincing of many of their sins, that they may come unto repentance; and that they may come unto the kingdom of my Father: wherefore the blessings which I give unto you, are above all things. And after you have received this, if you keep not my commandments, you cannot be saved in the kingdom of my Father. Behold I Jesus Cerist, you Lord and your God, and your Redeemer, by the power of my Spirit, have spoken it. Amen