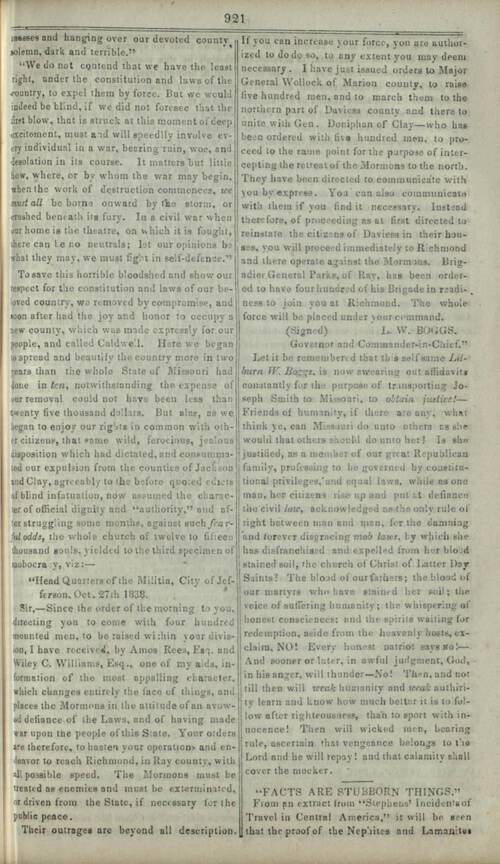 From an extract from “Stephens’ Incidents of Travel in Central America,” it will be seen that the proof of the Nephites and Lamanites [921] dwelling on this continent, according to the account in the Book of Mormon, is developing itself in a more satisfactory way than the most sanguine believer in that revelation, could have anticipated. It certainly affords us a gratification that the world of mankind does not enjoy, to give publicity to such important developements of the remains and ruins of those mighty people.

When we read in the Book of Mormon that Jared and his brother came on to this continent from the confusion and scattering at the Tower, and lived here more than a thousand years, and covered the whole continent from sea to sea, with towns and cities; and that Lehi went down by the Red Sea to the great Southern Ocean, and crossed over to this land, and landed a little south of the Isthmus of Darien, and improved the country according to the word of the Lord, as a branch of the house of Israel, and then read such a goodly traditionary account, as the one below, we can not but think the Lord has a hand in bringing to pass his strange act, and proving the Book of Mormon true in the eyes of all the people. The extract below, comes as near the real fact, as the four Evangelists do to the crucifixion of Jesus.—Surely “facts are stubborn things.” It will be as it ever has been, the world will prove Joseph Smith a true prophet by circumstantial evidence, in experiments, as they did Moses and Elijah. Now read Stephens’ story:

“According to Fuentes, the chronicler of the kingdom of Guatimala, the kings of Quinche and Cachiquel were descended from the Toltecan Indians, who, when they came into this country, found it already inhabited by people of different nations. According to the the manuscripts of Don Juan Torres, the grandson of the last king of the Quiches, which was in the possession of the lieutenant general appointed by Pedro de Alvarado, and which Fuentes says he obtained by means of Father Francis Vasques, the historian of the order of San Francis, the Toltecas themselves descended from the house of Israel, who were released by Moses from the tyranny of Pharaoh, and after crossing the Red Sea, fell into Idolatry. To avoid the reproofs of Moses, or from fear of his inflicting upon them some chastisement, they separated from him and his brethren, and under the guidance of Tanub, their chief, passed from one continent to the other, to a place which they called the seven caverns, a part of the kingdom of Mexico, where they founded the celebrated city of Tula.”