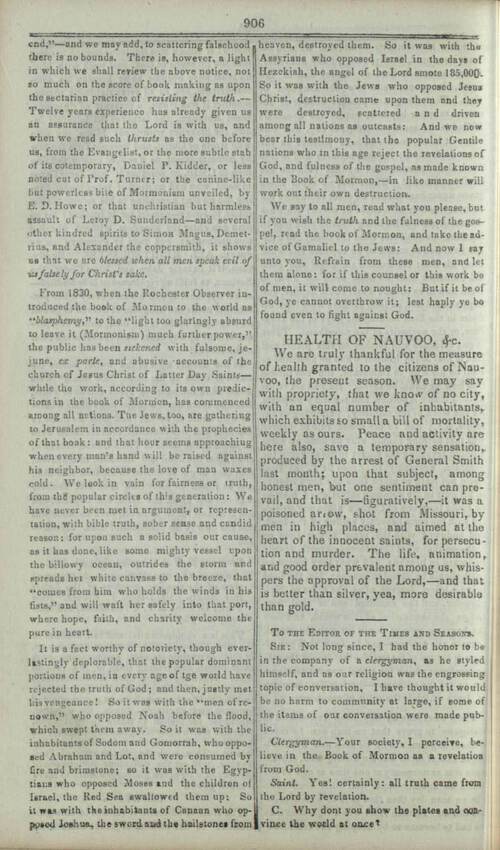 TO THE EDITOR OF THE TIMES AND SEASONS.

SIR: Not long since, I had the honor to be in the company of a clergyman, as he styled himself, and as our religion was the engrossing topic of conversation. I have thought it would be no harm to community at large, if some of the items of our conversation were made public.

Clergyman.— Your society, I perceive, believe in the Book of Mormon as a revelation from God.

Saint. Yes! certainly: all truth came from the Lord by revelation.

C. Why dont you show the plates and convince the world at once? [906]

S. For the same reason, sir, that you do not show the stone tables, and convince the world at once. They were held sacred in the ark of the covenant, and he that looked into that died.

Besides Mr. Smith would be the only proper person to exhibit and explain them; and for him to travel and exhibit them to convince the world at once, over a globe of about 25,000 miles in circumference, embracing various climes and inhabitants, using more than 300 different languages, and numbering more than 900,000,000 souls,—would be an eternal work. To do nothing but travel he would do well if he convinced one a day, which would be 365 a year. At this rate, could the present inhabitants live so long, it would require more than two and a half millions of years, leaving the increase, as the world is now, in heathen darkness.

C. I see you are prepared to resist natural reasons by arguments which have never before been presented to me. But as to its being a revelation the world doubts.

S. Don’t the world believe the witnesses to the book?

C. No: they testify too much: saying that an angel came down from heaven and brought the plates, and showed them.

S. Is any thing contrary to scripture that an angel should come from heaven in this age of the world, more than another?

C. Yes! The idea of seeing angels is preposterous. Dr. Gill, Dr. Scott, Dr. Clark, and all our great men in divinity discard the idea. Why sir, the presence of an holy angel would consume us.

S. I see you dont believe in the administration of angels in the church of Jesus Christ.

C. No: not I—it is next to blasphemy to suppose that God would send a holy angel among men in such an enlightened age of the world.

S. Sir, your reason is contrary to the bible; now listen to me a moment and I will show you that God never had a church and people upon the earth, without administering to them by angels. Hagar, Abraham’s wife’s servant saw an angel, to comfort her in the hour of distress: The Lord and two angels feasted with Abraham upon a fat calf—see Gen. 18 ch:—and the same angels went from Abraham, while he plead with the Lord for Sodom and Gomorah, and staid all night with Lot and partook of another feast. This may be the reason why Paul said “be not forgetful to entertain strangers, for thereby some have entertained angels unawares.” Jacob saw concourses of angels descending and ascending from heaven to earth, and even wrestled with God! Moses, who, after he murdered the Egyptian, had no better reputation than other men under the same charge, saw God face to face, and seventy of the elders of Israel with him. And the angel went with the camp—Joshua saw the captain of the Lord’s hosts—and from the reading of the old testament, it would seem that it was no very uncommon sight for men and women to see angels; even old Nebuchadnezzar, whom the three holy men were cast into the fiery furnace, saw four walking in the flames, “and the form of the fourth was like unto the son of God.” It appears he knew how Jesus Christ looked several hundred years before he came in the flesh, wicked as he was, and that is more than you allow among what you call righteous.

Again, besides the administering of angels to thousands which I will not now trouble you to hear,—at the birth of Jesus and before,—the Jews, who, you admit were so wicked that they crucified their Lord, were nevertheless visited by an angel yearly at the pool of Bethesda—an angel visited Cornelius before he was initiated into the kingdom: an angel unlocked the prison doors for Peter; and when the Lord was about to show his servants things that must shortly come to pass, he sent and signified it by his angel unto his servant John, and told John that the mystery of the seven starts was the seven angels of the seven churches of Asia.—What think ye, did God ever have a church without an angel in it?

C. You Mormons have too much scripture—you take all. Now we believe that reason and philocophy have the place of revelation, and as the old testament has been fulfilled, so as also the new, when the apostles died, ceased to be any thing more than the foundation upon which our learned divines were to build up churches until they converted the world to christianity, and brought in the millennium.

S. Too much scripture! why sir, the apostle says all scripture given by inspiration, is profitable for doctrine and reproof, &c., and that in the last days God, not man, would pour out his spirit upon all flesh; and they should prophecy, dream dreams, and see visions; and the Lord would reveal the abundance of peace and truth: gather children his from every country whither he had scattered them, and return to them a pure language, that they might call upon him with one consent: gather all nations to the valley of Jehoshaphat, and destroy them, that the children of Israel would be seven years in burning the carriages and implements of war; that instead of your reason and philosophy, Paul says, beware lest any man spoil you through philosophy and vain deceit, after the rudiments of the world, and not after the doc[907]trine of Christ; that instead of your easy times, the powers of heaven are to be shaken, and a time of trouble ensue which will baffle the skill of philosophy, while earthquakes, rebellion, bloodsed, and calamity will continue until great Babylon falls.

C. Must bid you good bye, sir, that doctrine is unpopular.