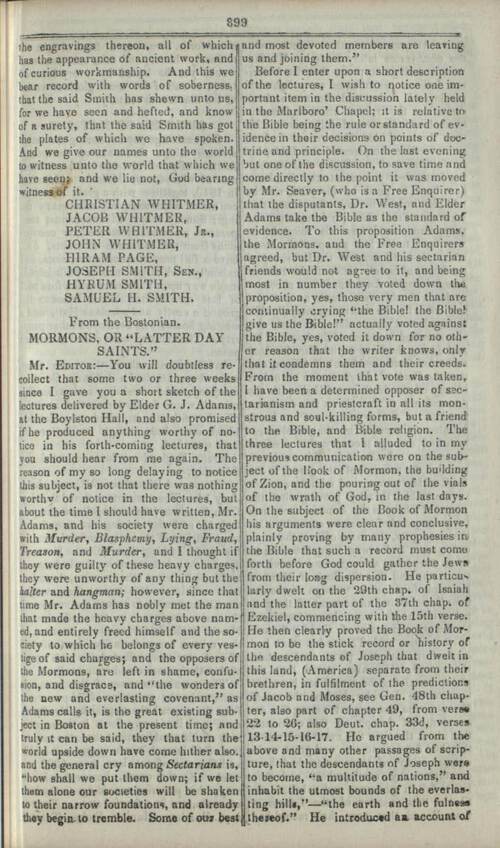 Mr. EDITOR:—You will doubtless recollect that some two or three weeks since I gave you a short sketch of the lectures delivered by Elder G.J. Adams, at the Boylston Hall, and also promised if he produced anything worthy of notice in his forth-coming lectures, that you should hear from me again. The reason of my so long delaying to notice this subject, is not that there was nothing worthy of notice in the lectures, but about the time I should have written, Mr. Adams, and his society were charged with Murder, Blasphemy, Lying, Fraud, Treason, and Murder, and I thought if they were guilty of these heavy charges, they were unworthy of any thing but the halter and hangman; however, since that time Mr. Adams has nobly met the man that made the heavy charges above named, and entirely freed himself and the society to which he belongs of every vestige of said charges; and the opposers of the Mormons, are left in shame, confusion, and disgrace, and “the wonders of the new and everlasting covenant,” as Adams calls it, is the great existing subject in Boston at the present time; and truly it can be said, they that turn the world upside down have come hither also, and the general cry among Sectarians is, “how shall we put them down; if we let them alone our societies will be shaken to their narrow foundations, and already they begin to tremble. Some of our best and most devoted members are leaving us and joining them.”

Before I enter upon a short description of the lectures, I wish to notice one important item in the discussion lately held in the Marlboro’ Chapel; it is relative to the Bible being the rule or standard of evidence in their decisions on points of doctrine and principle. On the last evening but one of the discussion, to save time and come directly to the point it was moved by Mr. Seaver, (who is a Free Enquirer) that the disputants, Dr. West, and Elder Adams take the Bible as the standard of evidence. To this proposition Adams, the Mormons. and the Free Enquirers agreed, but Dr. West and his sectarian friends would not agree to it, and being most in number they voted down the proposition, yes, those very men that are continually crying “the Bible! the Bible! give us the Bible!” actually voted against the Bible, yes, voted it down for no other reason that the writer knows, only that it condemns them and their creeds. From the moment that vote was taken, I have been a determined opposer of sectarianism and priestcraft in all its monstrous and soul-killing forms, but a friend to the Bible, and Bible religion. The three lectures that I alluded to in my previous communication were on the subject of the Book of Mormon, the building of Zion, and the pouring out of the vials of the wrath of God, in the last days. On the subject of the Book of Mormon his arguments were clear and conclusive, plainly proving by many prophesies in the Bible that such a record must come forth before God could gather the Jews from their long dispersion. He particularly dwelt on the 29th chap. of Isaiah and the latter part of the 37th chap. of Ezekiel, commencing with the 15th verse. He then clearly proved the Book of Mormon to be the stick record or history of the descendants of Joseph that dwelt in this land, (America) separate from their brethren in fulfilment of the predictions of Jacob and Moses, see Gen. 48th chapter, also part of chapter 49, from verse 22 to 26; also Deut. chap. 33d, verses 13-14-15-16-17. He argued from the above and many other passages of scripture, that the descendants of Joseph were to become, “a multitude of nations,” and inhabit the utmost bounds of the everlasting hills,”—“the earth and the fulness thereof.” He introduced an account of [end of page] many American antiquities together with the discoveries lately made by Mr. Stavens that all go to prove that the American Indians were once an enlightened people and understood the arts and sciences, as the ruined cities and monuments lately discovered fully prove. He then declared that this record had not come forth in the place of the Bible, but in fulfilment of the Bible; that its coming forth clearly demonstrated that Jesus has been as good as his word, viz: he told his disciples he had other sheep that were not of that fold (in Jerusalem) and they also should hear his voice, for he was sent to the lost sheep of the house of Israel,—and some of the lost sheep of the house of Israel, viz:—of the tribe of Joseph being in America, it was necessary Jesus should visit them, as also the ten tribes in the “north country.” He declared that Jesus did visit both the above named branches of the house of Israel during the forty days before his final ascension from the Mount of Olives, and that the Book of Mormon was not only a history of the dealings of God with the descendants of Joseph on this continent previous to the crucifixion of our Lord, but also an account of the gospel as established among them by the personal appearance of Christ on this continent, and that the account of the gospel in the Book of Mormon agreed with the account in the Bible; thereby proving that the gospel of Christ is the same in every nation, composed of the same eternal truths, the same gifts, the same offices, the same ordinances, and every thing the same as when Christ has an organized church on the earth; and that the Book of Mormon had come forth as an “ensign to the nations,” containing an account of the gospel in much plainness, being translated by the gift and power of God by the use of the Urim and Thummim. that had come forth with the plates that contain the record. He also stated that the plates containing the record had been hid up unto the Lord by Moroni the son of Mormon, the last prophet among the descendants of Joseph on this continent, that about the time this event took place, they had fallen into sin, and great wickedness; many of their cities had been overthrown by earthquakes, and they left to fall in ignorance and unbelief, until the “dispensation of the fulness of times,” and that now their record had come forth, throwing a flood of light on the early history of this continent and would yet be hailed by every lover of truth, as one of the most glorious works of the nineteenth century.