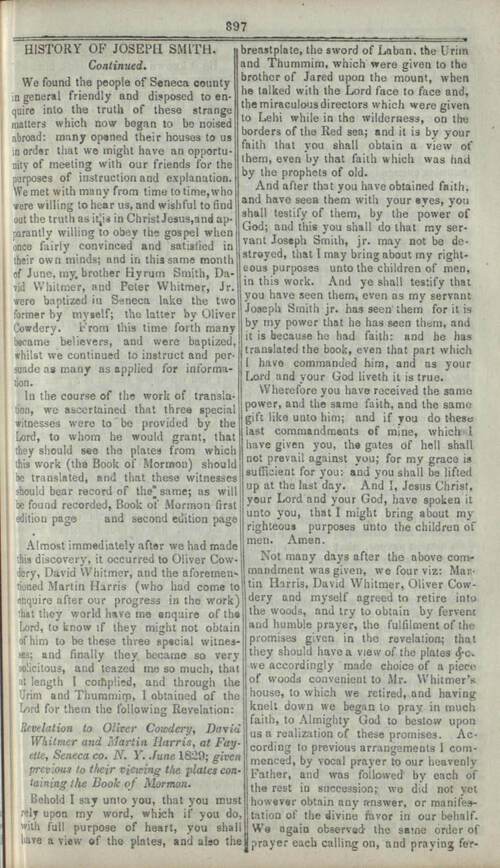 We found the people of Seneca county in general friendly and disposed to enquire into the truth of these strange matters which now began to be noised abroad: many opened their houses to us in order that we might have an opportunity of meeting with our friends for the purposes of instruction and explanation. We met with many from time to time, who were willing to hear us, and wishful to find out the truth as it is in Christ Jesus, and apparantly willing to obey the gospel when once fairly convinced and satisfied in their own minds; and in this same month of June, my brother Hyrum Smith, David Whitmer, and Peter Whitmer, Jr. were baptized in Seneca lake the two former by myself; the latter by Oliver Cowdery. From this time forth many became believers, and were baptized, whilst we continued to instruct and persuade as many as applied for information.

In the course of the work of translation, we ascertained that three special witnesses were to be provided by the Lord, to whom he would grant, that they should see the plates from which this work (the Book of Mormon) should be translated, and that these witnesses should bear record of the same; as will be found recorded, the Book of Mormon first edition page and second edition page .

Almost immediately after we had made this discovery, it occurred to Oliver Cowdery, David Whitmer, and the aforementioned Martin Harris (who had come to enquire after our progress in the work) that they would have me enquire of the Lord, to know if they might not obtain of him to be these three special witnesses; and finally they became so very solicitous, and teazed me so much, that at length I complied, and through the Urim and Thummim, I obtained of the Lord for them the following Revelation: Revelation to Oliver Cowdery, David Whitmer and Martin Harris, at Fayette, Seneca co. N. Y. June 1829 ; given previous to their viewing the plates containing the Book of Mormon.

Behold I say unto you, that you must rely upon my word, which if you do, with full purpose of heart, you shall have a view of the plates, and also the breastplate, the sword of Laban, the Urim and Thummim, which were given to the brother of Jared upon the mount, when he talked with the Lord face to face and, the miraculous directors which were given to Lehi while in the wilderness, on the borders of the Red sea; and it is by your faith that you shall obtain a view of them, even by that faith which was had by the prophets of old.

And after that you have obtained faith, and have seen them with your eyes, you shall testify of them, by the power of God; and this you shall do that my servant Joseph Smith, jr. may not be destroyed, that I may bring about my righteous purposes unto the children of men, in this work. And ye shall testify that you have seen them, even as my servant Joseph Smith jr. has seen them for it is by my power that he has seen them, and it is because he had faith: and he has translated the book, even that part which I have commanded him, and as your Lord and your God liveth it is true.

Wherefore you have received the same power, and the same faith, and the same gift like unto him; and if you do these last commandments of mine, which I have given you, the gates of hell shall not prevail against you; for my grace is sufficient for you: and you shall be lifted up at the last day. And I, Jesus Christ, your Lord and your God, have spoken it unto you, that I might bring about my righteous purposes unto the children of men. Amen.

Not many days after the above commandment was given, we four viz: Martin Harris, David Whitmer, Oliver Cowdery and myself agreed to retire into the woods, and try to obtain by fervent and humble prayer, the fulfilment of the promises given in the revelation: that they should have a view of the places & .c. we accordingly made choice of a piece of woods convenient to Mr. Whitmer’s house, to which we retired, and having knelt down we began to pray in much faith, to Almighty God to bestow upon us a realization of these promises.

According to previous arrangements I commenced, by vocal prayer to our heavenly Father, and was followed by each of the rest in succession; we did not yet however obtain any answer, or manifestation of the divine favor in our behalf. We again observed the same order of prayer each calling on, and praying fervently to God in rotation; but with the same result as before. Upon this our second failure, Martin Harris proposed that he would withdraw himself from us, believing as he expressed himself that his presence was the cause of our not obtaining what we wished for; he accordingly withdrew from us, and we knelt down again, and had not been many minutes engaged in prayer when presently we beheld a light above us in the air of exceeding brightness, and behold an angel stood before us; in his hands he held the plates which we had been praying for these to have a view of: he turned over the leaves one by one, so that we could see them, and discover the engravings thereon distinctly. He addressed himself to David Whitmer, and said, “David, blessed is the Lord, and he that keeps his commandments.” When immediately afterwards, we heard a voice from out of the bright light above us, saying, “These plates have been revealed by the power of God, and they have been translated by the power of God; the translation of them which you have seen is correct, and I command you to bear record of what you now see and hear.”

I now left David and Oliver, and went in pursuit of Martin Harris, who I found at a considerable distance, fervently engaged in prayer, he soon told me however that he had not yet prevailed with the Lord, and earnestly requested me to join him in prayer, that he also might realize the same blessings which we had just received. We accordingly joined in prayer, and ultimately obtained our desires, for before we had yet finished, the same vision was opened to our view; at least it was again to me, and I once more beheld, and heard the same things; whilst at the same moment, Martin Harris cried out, apparantly in ecstacy of joy, “Tis enough; mine eyes have beheld,” and jumping up he shouted, hosanah, blessing God, and otherwise rejoiced exceedingly.

Having thus through the mercy of God, obtained these manifestations, it now remained for these three individuals to fulfil the commandment which they had received, viz: to bear record of these things, in order to accomplish which, they drew up and subscribed the following document:—

THE TESTIMONY OF THREE WITNESSES.

BE it known unto all nations, kindreds, tongues, and people, unto whom this work shall come, that we, through the grace of God the Father, and our Lord Jesus Christ, have seen the plates which contain this record, which is a record of the people of Nephi, and also of the Lamanites, their brethren, and also of the people of Jared, who came from the tower of which hath been spoken; and we also know that they have been translated by the gift and power of God, for his voice hath declared it unto us: wherefore we know of a surety, that the work is true. And we also testify that we have seen the engravings which are upon the plates; and they have been shewn unto us by the power of God, and not of man. And we declare with words of soberness, that an angel of God came down from heaven, and he brought and laid before our eyes, that we beheld and saw the plates, and the engravings thereon; and we know that it is by the grace of God the Father, and our Lord Jesus Christ, that we beheld and bear record that these things are true; and it is marvelous in our eyes, nevertheless, the voice of the Lord commanded us that we should bear record of it; wherefore, to be obedient unto the commandments of God, we bear testimony of these things. And we know that if we are faithful in Christ we shall rid our garments of the blood of all men, and be found spotless before the judgment seat of Christ, and shall dwell with him eternally in the heavens. And the honor be to the Father, and to the Son, and to the Holy Ghost, which is one God. Amen.

Soon after these things had transpired, the following additional testimony was obtained:—

AND ALSO THE TESTIMONY OF EIGHT WITNESSES.

BE it known unto all nations, kindreds, tongues, and people, unto whom this work shall come, that Joseph Smith, Jr. the translator of this work, has shewn unto us the plates of which hath been spoken, which have the appearance of gold; and as many of the leaves as the said Smith has translated, we did handle with our hands: and we also saw the engravings thereon, all of which has the appearance of ancient work, and of curious workmanship. And this we bear record with words of soberness, that the said Smith has shewn unto us, for we have seen and hefted, and know of a surety, that the said Smith has got the plates of which we have spoken.