From the N. Y. Evangelist 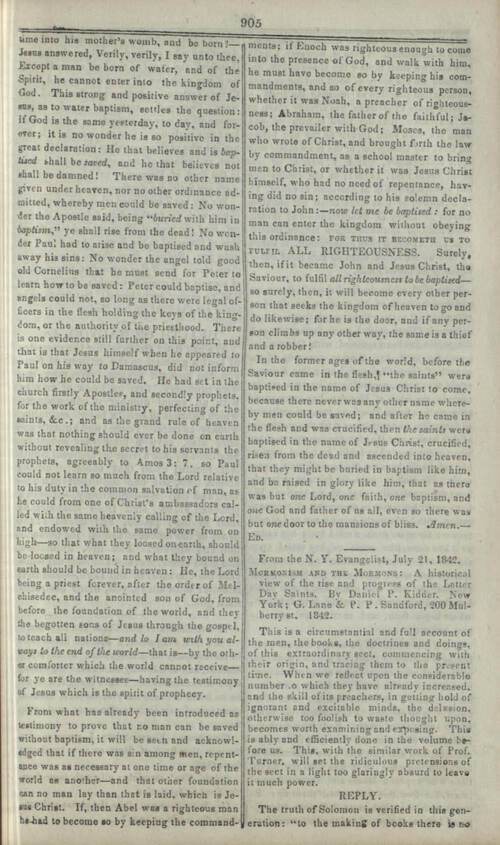 MORMONISM AND THE MORMONS: A historical view of the rise and progress of the Latter Day Saints. By Daniel P. Kidder. New York; G. Lane & P. P. Sandford, 200 Mulberry st. 1842.

This is a circumstantial and full account of the men, the books, the doctrines and doings, of this extraordinary sect, commencing with their origin, and tracing them to the present time. When we reflect upon the considerable number o which they have already increased, and the skill of its preachers, in getting hold of ignorant and excitable minds, the delusion, otherwise too foolish to waste thought upon, becomes worth examining and exposing. This is ably and efficiently done in the volume before us. This, with the similar work of Prof. Turner, will set the ridiculous pretensions of the sect in a light too glaringly absurd to leave it much power.

The truth of Solomon is verified in this generation: “to the making of books there is no [905] end,”—and we may add, to scattering falsehood there is no bounds. There is, however, a light in which we shall review the above notice, not so much on the score of book making as upon the sectarian practice of resisting the truth.—Twelve years experience has already given us an assurance that the Lord is with us, and when we read such thrusts as the one before us, from the Evangelist, or the more subtle stab of its cotemporary, Daniel P. Kidder, or less noted cut of Prof. Turner; or the canine-like but powerless bite of Mormonism unveiled, by E. D. Howe; or that unchristian but harmless assault of Leroy D. Sunderland—and several other kindred spirits to Simon Magus, Demetrius, and Alexander the coppersmith, it shows us that we are blessed when all men speak evil of us falsely for Christ’s sake.

From 1830, when the Rochester Observer introduced the book of Mormon to the world as “blasphemy,” to the “light too glaringly absurd to leave it (Mormonism) much further power,” the public has been sickened with fulsome, jejune, ex parte, and abusive accounts of the church of Jesus Christ of Latter Day Saints—while the work, according to its own predictions in the book of Mormon, has commenced among all nations. The Jews, too, are gathering to Jerusalem in accordance with the prophecies of that book: and that hour seems approachiug when every man’s hand will be raised against his neighbour, because the love of man waxes cold. We look in vain for fairness or truth, from the popular circles of this generation: We have never been met in argument, or representation, with bible truth, sober sense and candid reason: for upon such a solid basis our cause, as it has done, like some mighty vessel upon the billowy ocean, outrides the storm and spreads her white canvass to the breeze, that “comes from him who holds the winds in his fists,” and will waft her safely into that port, where hope, faith, and charity welcome the pure in heart.

We say to all men, read what you please, but if you wish the truth and the fulness of the gospel, read the book of Mormon, and take the advice of Gamaliel to the Jews: And now I say unto you, Refrain from these men, and let them alone: for if this counsel or this work be of men, it will come to nought: But if it be of God, ye cannot overthrow it; lest haply ye be found even to fight against God.