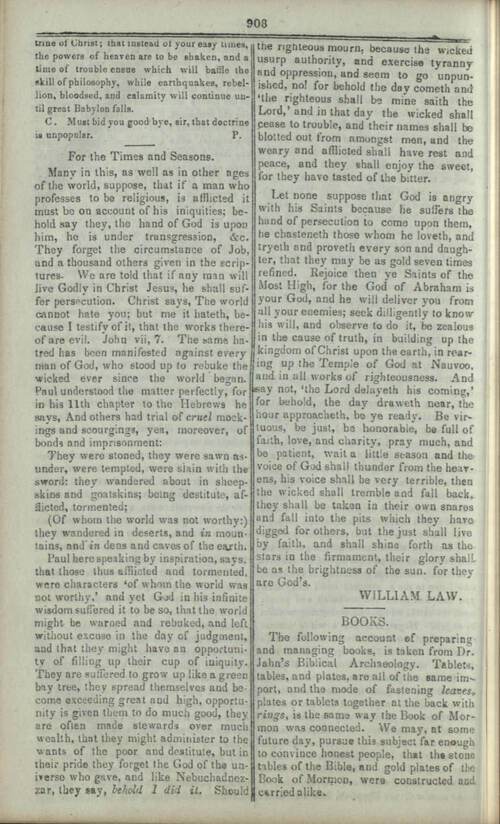 The following account of preparing and managing books, is taken from Dr. Jahn’s Biblical Archaeology. Tablets, tables, and plates, are all of the same import, and the mode of fastening leaves, plates or tablets together at the back with rings, is the same way the Book of Mormon was connected. We may, at some future day, pursue this subject far enough to convince honest people, that the stone tables of the Bible, and gold plates of the Book of Mormon, were constructed and carried alike. [908]

“Books, (which are mentioned as very well known as early as Job 19: 23. Num. 21: 14. Exod. 17: 14,) were written most anciently on skins, on linen, on cotton cloth, and the reed papyrus; and subsequently on parchment. The leaves were written over in small columns, called delautote, (Heb.) Jer. 36: 23. If the book were large, it was of course formed of a number of skins, of a number of pieces of linen and cotton cloth, or of papyrus, or parchment, connected together. The leaves were rarely written over on both sides, Ezek. 2: 9. Zech. 5: 1. Whether the lines were written as in the Sigean inscription, and in the Etruscan inscriptions, might yet be determined, if the stones mentioned Josh. 8: 32. could be found.

Inasmuch as the public mind has been unjustly abused through the fallacy of Dr. Bennett’s letters, we make an extract on the subject of marriage, showing the rule of the church on this important matter. The extract is from the Book of Doctrine and Covenants, and is the only rule allowed by the church.

“All legal contracts of marriage made before a person is baptized into this church, should be held sacred and fulfilled. Inasmuch as this church of Christ has been reproached with the crime of fornication, and polygamy: we declare that we believe, that one man should have one wife; and one woman, but one husband, except in case of death, when either is at liberty to marry again. It is not right to persuade a woman to be baptized contrary to the will of her husband neither is it lawful to influence her to leave her husband.”