Extracts from the Weekly Bostonian 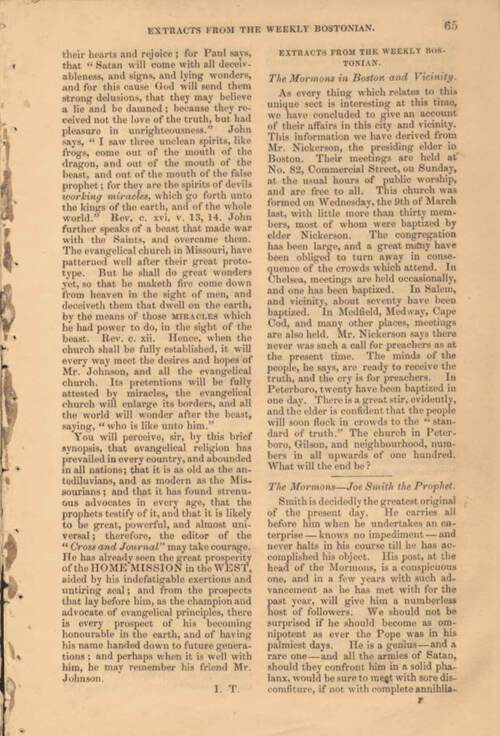 EXTRACTS FROM THE WEEKLY BOSTONIAN.

The Mormons in Boston and Vicinity.

As every thing which relates to this unique sect is interesting at this time, we have concluded to give an account of their affairs in this city and vicinity. This information we have derived from Mr. Nickerson, the presiding elder in Boston. Their meetings are held at No. 82, Commercial Street, on Sunday, at the usual hours of public worship, and are free to all. This church was formed on Wednesday, the 9th of March last, with little more than thirty members, most of whom were baptized by elder Nickerson. The congregation has been large, and a great many have been obliged to turn away in consequence of the crowds which attend. In Chelsea, meetings are held occasionally, and one has been baptized. In Salem, and vicinity, about seventy have been baptized. In Medfield, Medway, Cape Cod, and many other places, meetings are also held. Mr. Nickerson says there never was such a call for preachers as at the present time. The minds of the people, he says, are ready to receive the truth, and the cry is for preachers. In Peterboro, twenty have been baptized in one day. There is a great stir, evidently, and the elder is confident that the people will soon flock in crowds to the “standard of truth.” The church in Peterboro, Gilson, and neighbourhood, numbers in all upwards of one hundred. What will the end be?

The Mormons—Joe Smith the Prophet.

Smith is decidedly the greatest original of the present day. He carries all before him when he undertakes an enterprise—knows no impediment—and never halts in his course till he has accomplished his object. His post, at the head of the Mormons, is a conspicuous one, and in a few years with such advancement as he has met with for the past year, will give him a numberless host of followers. We should not be surprised if he should become as omnipotent as ever the Pope was in his palmiest days. He is a genius—and a rare one—and all the armies of Satan, should they confront him in a solid phalanx, would be sure to meet with sore discomfiture, if not with complete annihila-[65]tion. The true philosophy of go-a-headity—the quintessence of concentrated moral and spiritual energy, fears no combat, and although, we cannot say it exactly courts danger, it never flies from the post of duty on its approach. We have so high an opinion of Joe Smith, that we intend to open a correspondence with him, in order to acquaint ourselves with all his secret springs of action, and thus, get all the secrets of his success, public and private, worldly and ecelesiastical.

The chapter from the recently recovered book of Abraham, and the unique cut which illustrates it, on our outside, has occasioned us some expense; but we care not for that, so long as we please our patrons, which we mean to do at all hazards; trusting to the good sense of the most enlightened public in this, or any other universe, for suitable remuneration.

The Mormons hold meetings in Boston regularly on the sabbath, somewhere in Commercial Street, and are equally successful in saving souls, healing the sick, and restoring sight to the blind. Meetings are also held in Chelsea, and the cause is on the increase in that place.

Will elder Nickerson, or some of the brethren, furnish us with the statistics?

We have the pleasure to lay before our readers, the following letter from elder Nickerson, the presiding elder of the church of Latter-day Saints in Boston, who believes, to use his own words, that “wickedness will soon be swept from the earth, and that the day of universal righteousness will set in during this generation, when our offices shall all become peace, and our exactions righteousness.”

To the Editor of the Daily Ledger.

Dear Sir,—Observing a request in your paper for information of the situation and progress of the Latter-day Saints in Boston, and vicinity, I rejoice that I have this opportunity.

The cause of truth is onward in this city, and the region round about, I commenced preaching in Boston, on the 30th of May last, in Winchester Hall, in the forenoon, and in the afternoon took a part in the free discussion, which I followed for several months, when one of the number which was called infidels, began to believe in the truth of the old and new testaments, which the world calls Mormonism. The individual was Mr. Abijah Tewkesbury, who opened his shipping office, and seated it for free preaching. He was the first that was baptized in Boston. Three others were baptized on the 9th of January, 1842. I have held fore and afternoon meetings at 82, Commercial Street, ever since. There was a branch organized in Boston, numbering thirty, including one elder, and three priests, on the ninth of March. The great inquiry after truth still continues.

Several are added to the church weekly. I have baptized in Boston and vicinity, some from Maine, some have gone to sea in vessels, several in Lynn, four in Medfield, and seven in Cape Cod, and all are strong in the faith, and in good standing. I have baptized in all, a little rising fifty persons. There are calls for preaching on every side.

We have meetings in private houses through the city, nearly every evening. People of all classes come to hear, and it is rare that one goes away dissatisfied. The honest in heart are coming out; and I think, will every one join the church. There is likewise a branch organised in Salem. Brother Snow is preaching there. His church has sixty-two members, and is increasing every week. There is one elder and one priest. Elder Maginn is preaching in Peterboro, Gilson, and vicinity, where there are several branches, numbering about one hundred. I understand, twenty have been baptized in one day. A branch has been established also in Northbridge, of upwards of thirty members, and is on the increase; elder Swett presides.

I am now in Boston, and invite all the honest in heart, both priests and people, to come and hear for themselves, as I do believe the end of this age is near at hand, and the fulness of the gospel is preached, and the honest in heart, or the elect of God, will be gathered in from the four quarters of the earth, and a new era, a reign of righteousness, will commence on the earth, which will continue for a thousand years. If any, either priest or people, desire an interview for information, they will please give me their names, street and number, and time that they would wish for me to come and see [66] them, and if possible, I will attend to the call with pleasure.

Have you souls worth saving? If so, do not neglect to investigate. Paul’s religion persecuted the Saints, but the gospel of Christ, he was not ashamed of, for it is the power of God unto salvation to them that believe.

We believe in faith in the Lord Jesus Christ—repentance—baptism for the remission of sins—laying on of hands for the reception of the Holy Ghost—with all the prophecies and blessings which did follow the ancient Saints—such as casting out devils in the name of Christ, healing the sick, and so forth, which signs do follow many of those that believe, in the city of Boston. Come and see.

P. S. Likewise the devil is cast out by the word of God, and the sick are healed by the prayer of faith, and anointed with oil, and the poor have the gospel preached to them without money; and I request the citizens and authorities of the city of Boston, to open a house for the servant of the people, that the Lord hath sent to this city, to warn the people of the destruction which will take place in this generation, that is now on the earth, and teach them how they may escape, and come through, and abide the day of the second coming of Christ, to reign on the earth a thousand years. Quench not the spirit, despise not prophecyings, prove all things, hold fast that which is good.