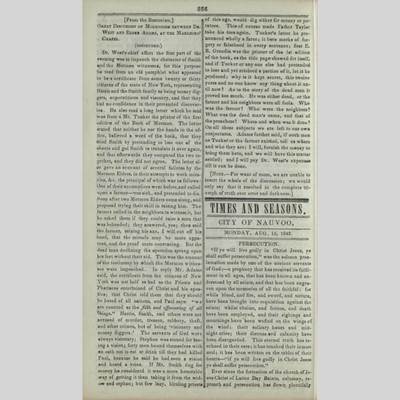 GREAT DISCUSSION ON MORMONISM BETWEEN DR. WEST AND ELDER ADAMS, AT THE MARLBORO’ CHAPEL.

Dr. West’s chief effort the first part of the evening was to impeach the character of Smith and the Mormon witnesses, for this purpose he read from an old pamphlet what appeared to be a certificate from some twenty or thirty citizens of the state of New York, representing Harris and the Smith family as being money diggers, superstitious and visonary, and that they had no confidence in their pretended discoveries. He also read a long letter which he said was from a Mr. Tucker the printer of the first edition of the Book of Mormon. The letter stated that neither he nor the hands in the office, believed a word of the book, that they tried Smith by pretending to lose one of the sheets and got Smith to translate it over again, and that afterwards they compared the two together, and they did not agree. The letter also gave an account of several failures by the Mormon Elders, in their attempts to work miracles, &c. the principal of which was as follows: One of their accomplices went before, and called upon a farmer—was sick, and pretended to die.

Soon after two Mormon Elders came along, and proposed trying their skill in raising him. The farmer called in the neighbors to witness it, but he asked them if they could raise a man that was beheaded; they answered, yes; then said the farmer, seizing his axe, I will cut off his head, that the miracle may be more apparent, and the proof more convincing. But the dead man declining the operation sprang upon his feet without their aid. This was the amount of the testimony by which the Mormon witnesses were impeached. In reply Mr. Adams said, the certificate from the citizens of New York was not half as bad as the Priests and Pharisees entertained of Christ and his apostles; that Christ told them that they should be hated of all nations, and Paul says: “we are counted as the filth and offscouring of all things. ” Harris, Smith, and others were not accused of murder, treason, robbery, theft, and other crimes, but of being ‘visionary and money diggers.’

The servants of God were always visionary; Stephen was stoned for seeing a vision; forty men bound themselves with an oath not to eat or drink till they had killed Paul, because he said he had seen a vision and heard a voice. If Mr. Smith dug for money he considered it was a more honorable way of getting it than taking it from the widow and orphan; but few lazy, hireling priests of this age, would dig either for money or potatoes. This of course made Father Taylor take his toes again. Tucker’s letter he pronounced wholly a farce; it bore marks of forgery or falsehood in every sentence; first E. B. Grandin was the printer of the 1st edition of the book, as the title page showed for itself, and if Tucker or any one else had pretended to lose and yet retained a portion of it, let it be produced; why is it kept secret, this twelve years and no one know any thing about it until now? As to the story of the dead man it proved too much. He was either dead, or the farmer and his neighbors were all fools. Who was the farmer? Who were the neighbors? What was the dead man’s name, and that of the preachers? Where and when was it done? On all these subjects we are left to our own conjectures. Adams further said, if such men as Tucker or the farmer existed, tell us where and who they are; I will, furnish the money to bring them here, and we will have this matter settled; and I will pay Dr. West’s expenses till it can be done.

[NOTE.—For want of room, we are unable to insert the whole of the discussion; we would only say that it resulted in the complete triumph of truth over error and darkness.]