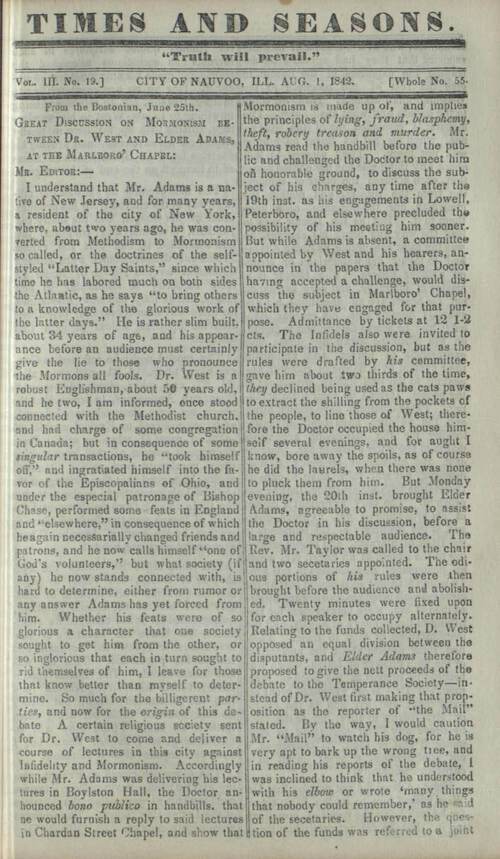 GREAT DISCUSSION ON MORMONISM BETWEEN DR. WEST AND ELDER ADAMS, AT THE MARLBORO’ CHAPEL:

I understand that Mr. Adams is a native of New Jersey, and for many years, a resident of the city of New York, where, about two years ago, he was converted from Methodism to Mormonism so called, or the doctrines of the self-styled “Latter Day Saints,” since which time he has labored much on both sides the Atlantic, as he says “to bring others to a knowledge of the glorious work of the latter days.” He is rather slim built, about 34 years of age, and his appearance before an audience must certainly give the lie to those who pronounce the Mormons all fools. Dr. West is a robust Englishman, about 50 years old, and he two, I am informed, once stood connected with the Methodist church, and had charge of some congregation in Canada; but in consequence of some singular transactions, he “took himself off,” and ingratiated himself into the favor of the Episcopalians of Ohio, and under the especial patronage of Bishop Chase, performed some feats in England and “elsewhere,” in consequence of which he again necessarially changed friends and patrons, and he now calls himself “one of God’s volunteers,” but what society (if any) he now stands connected with, is hard to determine, either from rumor or any answer Adams has yet forced from him. Whether his feats were of so glorious a character that one society sought to get him from the other, or so inglorious that each in turn sought to rid themselves of him, I leave for those that know better than myself to determine. So much for the billigerent parties, and now for the origin of this debate A certain religious society sent for Dr. West to come and deliver a course of lectures in this city against Infidelity and Mormonism. Accordingly while Mr. Adams was delivering his lectures in Boylston Hall, the Doctor anhounced bono publico in handbills, that ne would furnish a reply to said lectures in Chardan Street Chapel, and show that Mormonism is made up of, and implies the principles of lying, fraud, blasphemy, theft, robery treason and murder. Mr. Adams read the handbill before the public and challenged the Doctor to meet him on honorable ground, to discuss the subject of his charges, any time after the 19th inst. as his engagements in Lowell, Peterboro, and elsewhere precluded the possibility of his meeting him sooner. But while Adams is absent, a committee appointed by West and his hearers, announce in the papers that the Doctor having accepted a challenge, would discuss the subject in Marlboro’ Chapel, which they have engaged for that purpose. Admittance by tickets at 12 1-2 cts. The Infidels also were invited to participate in the discussion, but as the rules were drafted by his committee, gave him about two thirds of the time, they declined being used as the cats paws to extract the shilling from the pockets of the people, to line those of West; therefore the Doctor occupied the house himself several evenings, and for aught I know, bore away the spoils, as of course he did the laurels, when there was none to pluck them from him. But Monday evening, the 20th inst. brought Elder Adams, agreeable to promise, to assist the Doctor in his discussion, before a large and respectable audience.

The Rev. Mr. Taylor was called to the chair and two secetaries appointed. The odious portions of his rules were then brought before the audience and abolished. Twenty minutes were fixed upon for each speaker to occupy alternately. Relating to the funds collected, D. West opposed an equal division between the disputants, and Elder Adams therefore proposed to give the nett proceeds of the debate to the Temperance Society— instead of Dr. West first making that proposition as the reporter of the “the Mail” stated.

By the way, I would caution Mr. “Mail” to watch his dog, for he is very apt to bark up the wrong tree, and in reading his reports of the debate, I was inclined to think that he understood with his elbow or wrote ‘many things that nobody could remember,’ as he said of the secetaries. However, the question of the funds was referred to a joint [863] committee, who at a subsequent meeting reported that they had agreed after defraying the expenses of the debate to give the rest of the proceeds to the Washingtonian Society.

Now we come to the debate and what shall I say. The disputants reminded me of the paddy’s flea, when he put his finger on him he was not there. They seemed to talk about any thing else but the chosen question, each accused the other of wandering from the subject, and neither the chairman, nor the audience, could keep them to it. But as the Doctor was to lead the way and prove his charges, he was the most censurable, as Elder Adams had to follow his wanderings or strike off another course. The Doctor is a master of language, and very sarcastic, but his proofs are all assertions, his arguments assumptions, his reasons ridicule; and he seems determined to frighten the Mormons away by looks and expressions of horror, and annihilate their system by a flower of rhetoric, appealing to the well known prejudices of the people, instead of their understanding. Three evenings have passed away and the auditors have been anxiously looking for the astounding arguments that is to show the blasphemous, treasonable, and murderous tendency of Mormonism; but still they have to console themselves with his assertion, that he can prove it. The only argument I collect of his producing as yet, to prove charges, is the testimony of the witnesses to the Book of Mormon, and others testifying to the advent of an angel, &c. which be pronounced blasphemous in this age.

To which his antagonist replied that by the same rule, all prophets, apostles and inspired men of old, were blasphemers for testifying to the ministry of angels, and the manifestations of God to them. They had some dispute about the application of the 29th chapter of Isaiah, which was brought in support of the Book of Mormon, but Dr. West expressed great astonishment and aversion to the course of Mr. Adams in adverting to the bible to prove any thing pertaining to Mormonism; that of itself, he considered, if not blasphemous, a great insult to a christian community.

Elder Adams did not wonder that Dr. West wished him to let the Bible alone, for he well knew the result of investigating it. But he did not catch him there, for Adams quoted scriptures in such torrents as sometimes astonished the people, and made his antagonist writhe under it. Having no argument relating to murder, treason, &c. to refute, and being unwilling to follow West in his wanderings, Adams took up his time in briefly wiping off his sarcasms, and proving his doctrine from the Bible, which he seemsed to have all on the end of his tongue.

The first evening he showed the falling away of the church from the primitive order of the Gospel, and the many corruptions, divisions, and traditions that had succeeded it, and that the various Protestant denominations were entirely dependent on the church of Rome for their authority to administer in holy things, unless they had new revelations, for there was no succession of priesthood after the apostles, unless through that channel.

The second night he referred to Genesis chap. xlviii, 14, 21—and chap. xlix. 22, 27, and other places; likewise to American Antiquities, to prove that the aborigines were descendants of Joseph, and then referred to Exekiel xxxvii. 15—22, in proof of what he said. From the ancient custom of the Jews writing upon parchment and rolling it round sticks, he argued that the writing on the stick of Judah mentioned in the text, was the Bible coming from the Jews, and the stick of Joseph was the Book of Mormon written by the seed of Joseph. These arguments were not refuted.

The third night he quoted the 24th chapter of Isaiah, 5th verse, to prove that the christian world because of apostacy have broken the Gospel covenant, transgressed its laws, changed its ordinances, &c. hence the necessity of new revelations to renew the covenant and restore the priesthood. This too was left unanswered. The Doctor should have put forth his “strong reasons” besfore the discussion ended, but either he had none or could not bring them forth if he had. I hope they will be forthcoming, or I do not know but I shall be compelled to be a Mormon!

The discussion closed on Friday evening at 11 o’clock, having done immense good towards disseminating the doctrines of the Latter Day Saiuts. The audience were highly excited.