From the Bostonian, July 2nd 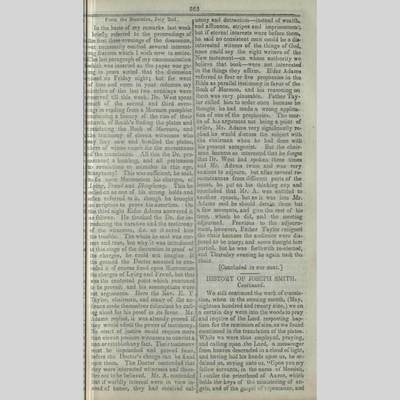 From the Bostonian, July 2nd.

In the haste of my remarks last week I briefly referred to the proceedings of the first three evenings of the discussion, but necessarily omitted several interesting features which I wish now to notice. The last paragraph of my communication which was inserted as the paper was going to press stated that the discussion closed on Friday night; but for want of time and room in your columns my sketches of the last two evenings were reserved till this week. Dr. West spent much of the second and third evenings in reading from a Mormon pamphlet containing a history of the rise of their church, of Smith’s finding the plates and translating the Book of Mormon, and the testimony of eleven witnesses who say they saw and handled the plates, three of whom vouch for the correctness of the translation. All this the Dr. pronounced a humbug, and all pretension to revelations or miracles in this age, blasphemy! This was sufficient, he said, to fix upon Mormonism his charges, of Lying, Fraud and Blasphemy. This he relied on as one of his strong holds and often referred to it, though he brought no scripture to prove his assertion. On the third night Elder Adams answered it as follows. He thanked the Dr. for introducing the narative and the testimony of the witnesses, &c. as it saved him the trouble. The whole he said was correct and true, but why it was introduced at this stage of the discussion in proof of the charges, he could not imagine If the ground the Doctor assumed be conceded it of course fixed upon Mormonism the charges of Lying and Fraud, but that was the contested point which remained to be proved; and his assumptions were not arguments. Here the Rev. E. T Taylor, chairman, and many of the audience made themselves ridiculous by calling aloud for his proof in its favor. Mr. Adams replied, it was already proved if they would admit the power of testimony. No court of justice could require more than eleven positive witnesses to convict a man or establish any fact.

Their testimony must be impeached and proved false, before the Doctor’s charge can be fixed upon them. The Doctor contended that they were interested witnesses and therefore not to be believed. Mr. A. contended that if worldly interest were in view instead of honor, they had received calumny and detraction—instead of wealth, and affluence, stripes and imprisonment; but if eternal interests were before them, he said no consistent man could be a disinterested witness of the things of God, none could say the eight writers of the New testament—on whose authority we believe that book—were not interested in the things they affirm. Elder Adams referred to four or five prophesies in the Bible as parallel testimony in favor of the Book of Mormon, and his reasoning on them was very plausable. Father Taylor called him to order once because he thought he had made a wrong application of one of the prophesies. The merits of his argument not being a point of order, Mr. Adams very significantly replied he would discuss the subject with the chairman when he had done with his present antagonist. But the chairman became so interested that he forgot that Dr. West had spoke three times and Mr. Adams twice and was very anxious to adjourn, but after several remonstrances from different parts of the house, he put on his thinking cap and coucluded that Mr. A. was entitled to another speech, but as it was late Mr. Adams said he should detain them but a few moments, and give the rest of his time, which he did, and the meeting adjourned. Previous to the adjournment, however, Father Taylor resigned the chair because the audience were disposed to be noisy; and some thought him partial, but he was forthwith re-elected, and Thursday evening he again took the chair.

[Concluded in our next.]