“When we reflect on the great purposes of God” 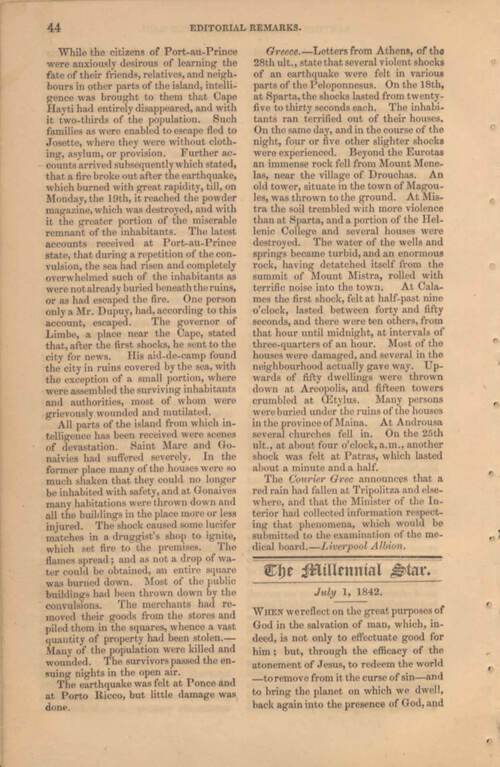 WHEN we reflect on the great purposes of God in the salvation of man, which, indeed, is not only to effectuate good for him; but, through the efficacy of the atonement of Jesus, to redeem the world—to remove from it the curse of sin—and to bring the planet on which we dwell, back again into the presence of God, and [44] to make the intelligences which people it, fit recipients of his own glory, in order that they may become one with the Father and with the Son, even as they are one. We say, that, when we reflect on these sublime purposes, we cannot but feel astonished that the religious public can possibly for a moment suppose, that the present multifarious creeds and sects will be the agency by which the God of heaven shall effect his will.∗ His ways are not, indeed, as our ways, nor his thoughts as our thoughts; and, truly, “the heart of man is deceitful above all things and desperately wicked;” for while the professed followers of the meek and lowly Jesus condemn the Jews for their treatment of him, and look upon it as a display of the most diabolical conduct that ever degraded man, and justly so, yet we feel bold to ask the question—how would the present generation have acted in similar circumstances, with their present principles and feelings? Here was the Jewish religion, originally established by divine revelation, with its horde of priests and its splendid ritual; when, lo! an individual rises up from obscurity, of humble origin, a carpenter and the son of a carpenter, whose parents were known to many, whose brothers were James, and Joses, and Juda, and Simon, and whose sisters were there with them; and yet this individual comes forth to the public, declaring that he had had a previous existence—that he had come forth from the Father—that he was one with him, and thought it not robbery to declare himself equal with God. Yes, we ask the question, how would the present generation of religionists have received him? would they not have denounced him as the greatest of impostors and blasphemers? There was nothing in his origin, conduct, or teaching, with which they could have sympathised. God chooses the weak things of the world to confound the mighty; but the dictates of modern wisdom would select the wise, the learned, the eloquent, and the accomplished for their purposes; for is not, indeed, every system of the present day upheld by the subtlety and skill of its advocates, and not by the irresistible principles of truth?

The authority which the Saviour claimed would have fund no allegiance in them, his professed mission by divine revelation would not have been listened to by those, who, for ages, have had a form of godliness yet deny the power. And let us remember God will ever act like himself; and we again express our surprise at the infatuation of the religious

∗ The Rev. J. ANGUS, secretary to the Baptist Missionary Society, declared at the late meeting at Liverpool, that the greatest difficulty with which they had to contend was the hostile operations of the agents belonging to the Society for the Propagation of the Gospel, who were proclaiming aloud to the natives, and amongst the heathen, that none had a right to convert them but themselves—that they alone were the followers of Jesus and the representatives of the apostles ; and, in consequence, all their (the Baptist ) services, and all their ministers and ordinances were entirely in vain.— Albion.

It is also stated in the writings of the lamented missionary, Williams, that in the South Seas they were necessitated to make terms with the Wesleyans to labour in separate localities, lest the diversity of their teachings should become known to their converts, and produce disastrous results for their individual interests. world, in supposing that the great and consummating work of God is to be effected by agency, so unlike God in all things, so widely at variance with all history of his ways, and so destitute of power. Well may the prophet exclaim, “Stay yourselves and wonder: they are blind and make you blind: they are drunken, but not with wine; they stagger, but not with strong drink. For the Lord hath covered you with a spirit of slumber, and hath shut up your eyes: the prophets, and your chief seers hath he covered. And the vision of them all is become unto you as the words of a book that is sealed up, which they deliver to one that can read, saying—read this, I pray thee. Then shall he say—I cannot, for it is sealed.

And the book is given to him that cannot read, saying—read this, I pray thee; and he shall say, I cannot read. Therefore the Lord said—because this people come near unto me with their mouth, and honour me with their lips, [45] but have removed their heart far from me, and their fear toward me was taught by the precept of men; therefore behold, I will again do a marvellous work and a wonder; for the wisdom of their wise men shall perish, and the understanding of their prudent men shall be hid.”* Indeed, this great event to which the prophet alludes, transpired some fourteen years ago; and how has it been received? He has, indeed, commenced to do a “marvellous work and a wonder,” by causing his servant JOSEPH, who was not learned, to be the instrument in bringing forth the record of the house of Joseph, and with it the Fulness of the Gospel. And what is the result? The religious public, with a morbid sensibility, denounce the Book of Mormon as a tissue of weakness and blasphemy, and the propagators of its simple and sublime principles as the greatest impostors that have ever arisen. Invention has been racked to put down the work of God; self-opinionated men, wise in their own conceits, vainly hoped that a little time would put a stop to the progress of the work; savage bigotry, with fiendish zeal, went forth shedding the blood of the Saints, despoiling their homes, and inflicting upon them every act of injustice. And has the work stayed in its progress? nay, but on the contrary; the truth is onward with unexampled success; the God of heaven is manifesting his purposes in gathering the honest in heart, who through obedience to the simple truth of the gospel, have entered into covenant with himself; and by revealing unto them continually more of his will, in order that they may do it, and live by every word that proceedeth out of his mouth. We congratulate the Saints of the Last Days on their inestimable privileges in having raised up unto them a servant of the Lord, like unto Moses, to guide his people and make know unto them the purposes of the Most High.

We have much pleasure this month in being able to give an illustration and extract from the BOOK OF ABRAHAM; a book of higher antiquity than any portion of the bible.

Singular is the providence by which this ancient record fell into the hands of the servant of the Lord, JOSEPH SMITH. A gentleman, travelling in Egypt, made a selection of several mummies, of the best kind of embalming, and of course in the best state of preservation; on his way to England he died, bequeathing them to a gentleman of the name of CHANDLER. They arrived in the Thames, but it was found the gentleman was in America, they were than forwarded to New York and advertised, when Mr. CHANDLER came forward and claimed them. One of the mummies, on being unrolled, had underneath the cloths in which it was wrapped, lying upon the breast , a roll of papyrus, in an excellent state of preservation, written in Egyptian character, and illustrated in the manner of our engraving, which is a copy from a portion of it. The mummies, together with the record, have been exhibited, generally, through the States, previous to their falling into our

* Old translation. hands. Mr. CHANDLER was, of course, anxious to find some one who could interpret or translate this valuable relic of antiquity, and, we believe, on one occasion, met with an individual who was enabled to decipher a small portion, or, at least, to give an opinion of what he supposed its meaning to be. He every where heard mention of JOSEPH SMITH and the Book of Mormon, but so generally associated with something slanderous, that he could scarcely think seriously of applying to him. But at length, however, he called upon Mr. SMITH, to inquire if he had a power by which he could translate the ancient Egyptian.

Mr. SMITH replied that he had, when Mr. CHANDLER presented the fragment which had been partially interpreted. Mr. SMITH retired into his translating room, and presently returned with a written translation in English, of [46] the fragment, confirming the supposed meaning ascribed to it by the gentleman to whom it had been previously presented. An event, of a nature so extraordinary, was of course soon noised abroad, when a number of gentlemen in the neighbourhood, not connected with the Saints, united together, and, purchasing the record together with some or all of the mummies, made Mr. SMITH a present of them. The record is now in course of translation by the means of the Urim and Thummim, and proves to be a record written partly by the father of the faithful, Abraham, and finished by Joseph when in Egypt. After his death, it is supposed they were preserved in the family of the Pharaohs and afterwards hid up with the embalmed body of the female with whom they were found. Thus it is, indeed, true, that the ways of the Lord are not as man’s ways, nor his thoughts as our thoughts. Here, then, is another subject for the Gentile world to stumble at, and for which to persecute the Saints, not knowing that there is nothing hidden but what shall be brought to light, and nothing secret but what shall be discovered. Let us have no revelations is the popular cry of the day; any one’s creed but God’s. How true were the word’s of Jesus, “because I come unto you in my father’s name ye will not receive me; if another should come in his own name, him ye will receive.”

The language of the present generation is, we can believe in the marvellous works of God in former ages, but not now; how will they be confounded as the mighty purposes of Jehovah roll on unfolding mystery after mystery to his people, while his judgments are pouring out upon the ungodly and the unbelieving.

Let the Saints be faithful and watchful, and be ready to receive all things that God shall be pleased to communicate for their well-being in these the last days; bearing in mind that his great and finishing work, his gathering of the Saints together into one, in order to establish his kingdom, the dominion of which shall be universal, and all powers become subject unto it, will require revelations peculiar to itself, such as were never communicated at any former period of time. Now is the day of the trial of our faith, the day of warfare and of strife against the powers of darkness; but anon shall be the day of triumph, blessed shall they be who endure unto the end, and overcome, and swell the song of victory, for they shall have power over the nations to rule them with a rod of iron, and they shall have given unto them the morning star.