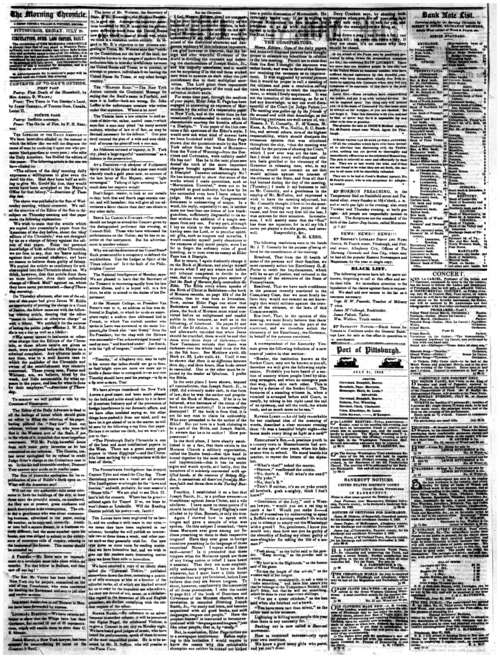 I feel, Messrs. Editors, that I am trespassing on your indulgence, and possibly on the patience of your numerous readers, in asking you to insert another article on the subject of Mormonism. An apology would be unnecessary if my fellow citizens were apprised of the diabolical character and dangerous tendency of this infamous imposture. I am glad however to discover, that the benign and ever watchful Governor of the world is dividing the counsels and defeating the machinations of Joseph Smith, Jr., and his ungodly associates; and it would not be surprising if in the end these wicked men were to execute on each other the just punishment due to their multiplied enormities. The Lord grant them repentance to the acknowledgment of the truth and the salvation of their souls.

For some time past, through the medium of your paper, Elder John E. Page has been engaged in answering an exposure of Mormonism by the editor of a respectable paper in New York, and at the same time he has occasionally condescended to notice with his characteristic courtesy the humble efforts of “A Disciple.” Your paper of the 15th contains a fair specimen of the Elder’s style. I would now ask what kind of answer have we been furnished with? Has Elder Page shown that the quotations made by the New York editor from the book of Mormon—from the Voice of Warning—from the Doctrines and Covenants, were unfairly made? He has not! Has he in the next place even denied the truth of the more important charges brought against Mormonism by A Disciple? I answer unhesitatingly No! He has attempted to show that some of the works which I made quotations, such as “Mormonism Unveiled,” were not to be regarded as good authority, but how far he has succeeded even here I leave others to judge. His attack on the Congressional document is undeserving of notice. In a word, his reply, especially to me, is neither more nor less than one tissue of low blackguardism, sufficiently disgraceful to its author without the addition of a single sentence from any one. For my part, although I lay no claim to the apostolic office—to having seen the Lord, or to peculiar spiritual gifts, such as tongues and miracles, I would consider myself justly obnoxious to the censures of any moral people, were I so far to forget the ordinary rules of good breeding, as to treat even an enemy as Elder Page has A Disciple.

But to return, I again distinctly charge it on the Book of Mormon, and pledge myself to prove what I say any where and before any tribunal competent to decide in the case, that in recording two plain matters of fact the Book of Mormon flatly contradicts the Bible. The Bible every where speaks of the birth of Christ at Bethlehem—the book of Mormon records, on page 234 of the 3d edition, that he was born at Jerusalem. Now, unless Elder Page can show that Bethlehem and Jerusalem are the same place, the Book of Mormon must stand convicted before an enlightened and candid public in this instance, as well as in the following, a falsehood. On pages 51 and 434 of the 3d edition, it is first predicted and afterwards recorded that when Jesus should be crucified, there would be and that there were three days of darkness,—the New Testament records that there was darkness over the whole land from the 6th to the 9th hour. See Matthew xxvii. 45; Mark xv. 33; Luke xxiii. 44. Until it can be shown that there is no difference between three days and three hours, these books cannot be reconciled. One or the other must be rejected by the reader as fabulous. I prefer the Bible.

In the next place I have shown, beyond all contradiction, that Joseph Smith, Jr., in 1829, did solemnly make oath, in due form of law, that he was the author and proprietor of the Book of Mormon. If he is to be believed, what becomes of the claim of the book to divine authority? It is necessarily destroyed! If the book is from God, it is not far any man to claim its authorship. Who ever pretended to be the author of the Bible? But yet here is a book claiming to be a part of the Bible, and Joseph Smith, Jr. swears that he is its author! How preposterous!

In the third place, I have clearly established it as a fact, that there exists in the Mormon Church a military organization, called the Danite band—that this band is bound together by the most shocking oaths and imprecations—that it has its secret signs and watch words, and lastly, that the members of it solemnly covenanted with uplifted hands, at the instance of Sidney Rigdon, to assassinate all deserters from the Mormon faith and throw them to the Turkey Buzzards.

Fourthly, I established it as a fact that Joseph Smith, Jr., is a profane swearer—a blasphemer against Jesus Christ, and a vile adulterer. I have more on these points if it should be called for. Nancy Rigdon’s case alluded to by Gen. Bennett, is only too true.

Again I shewed how to speak with tonges and gave a sample of what was spoken. On this subject I remarked, “have these Mormons ever gone among our Indians preaching to them in their respective tongues? Have they ever gone to foreign countries preaching in the language of those countries? Never! I repeat what I there said—never! Is it pretended that these tongues what the Mormons speak are those of any living nation or tribe? I have heard it asserted. That they are most emphatically unknown tongues, I have no doubt whatever, but I must have a little better evidence than any yet furnished, before I can believe that they are known tongues. To show, however, conclusively the insincerity of all these pretensions, I refer the reader to page 215 of the book of Doctrines and Covenants of the Mormon church, when a revelation is recorded directing Joseph Smith, Jr., “to study and learn, and become acquainted with all good books, and with languages, tongues and people.” Here the prophet himself is instructed to become acquainted with “languages and tongues, ” just like other people, that is, by study. ”

But in conclusion, Elder Page invites me to a newspaper controversy. Before replying to this invitation I would require to know the reason why this redoubtably champion can neither be coaxed nor kicked into a public discussion of Mormonism. He invariably backs out. If he is willing to discuss Mormonism let him express his readiness to go on with the discussion agreed to in the Scotch-hill market-house on the 21st June.