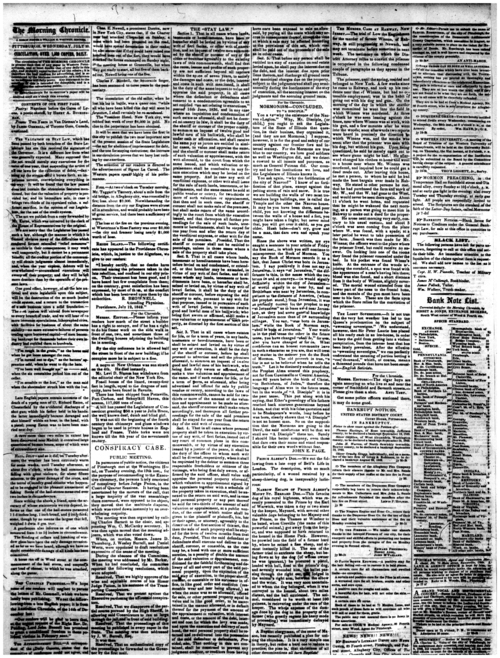 You ask “why the existence of the Nauvoo Legion.” Why, Mr. Disciple, (or child,) you ought to ask the Legislature of the State of Illinois that question, its their business, they organised it, (and they are not Mormons.) I suppose, however, it is for the good and safety of our country against our frontier foes and internal mutiny. For the Mormons are true blue to our country, we love good soldiers as well as Washington did, and we detest a coward to all intents and purposes, as much as General Putman did. Our country and her free institutions we love, and the Legislature of Illinois knows it.

You ask again, “why the fortification of the city of Nauvoo?” I know of no fortification of that place, except against the pelting storm of rain and snow. It is true we are building the walls of two most tremendous large buildings, one is called the Temple and the other the Nauvoo house. It may be you have been there, and poor child, you not knowing the difference between the walls of a house and a fort, you might have taken a fright; but never mind that, you will get over it child, as you get older. Hush babe—don’t cry, grow and be a man, that dare own and speak your name.

Since the above was written, my eye caught a sentence in your article of Friday the first inst., in which you still continue to misrepresent the Book of Mormon. You say the Book of Mormon records it as a fact, that Jesus Christ was born in Jerusalem. I say positively it does not say in Jerusalem, it says “at Jerusalem,” the difference is this, in the sense which the two terms in and at conveys— in would signify deffinitely within the city of Jerusalem— at would signify in or near by, and as Bethlehem was near by Jerusolem, in comparison to the distance of America, (where the prophet stood,) from Jerusalem, it was as perfectly correct for the prophet to say “at Jerusalem” as to have said near Jerusalem, as they had some general knowledge of Jerusalem more than of its surrounding villages. You say, “was born in Jerusalem,” while the Book of Mormon says, “shall be born at Jerusalem.” Your words is in the past tense the other in the future tense, you have changed “shall be,” for was, also you have changed at for in. What confidence can an honest community have in such a character as you are, that will treat any matter in the manner you do the Book of Mormon. The old proverb is true, “a liar is not to be believed when he tells the truth.” Let it be distinctly understood that the Prophet Alma uttered this prophecy, not far from Guatimalla or Central America, some 82 years before the birth of Christ, “in Bethlehem, of Judea,” therefore the language of Alma was in the future tense, but in the words of “A Disciple” it is in the past tense. This put along with his saying, that Ether’s geneology of his fathers reached back nineteen generations beyond Adam, and that with his false quotation said to be Shakespeare’s words, long before he was born, clearly shows that “A Disciple” is not an honest man. So on the supposition that the Mormons are going to the Devil, the said misfortune will be that we shall see “A Disciple” there too. Surely I should like better company, even those that dare own their name and stand responsible for their own words without fear.