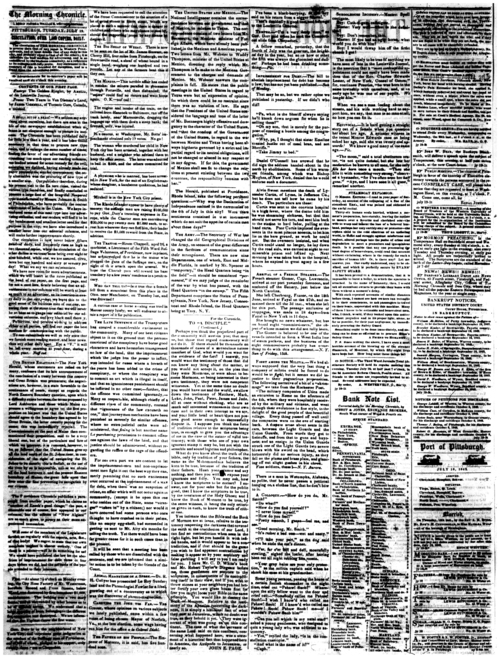 Perhaps you think the prejudiced part of the community will sustain you; that may be, but those that regard consistency will not do it. If there should be thousands on thousands of cases of a miraculous nature manifest of God, what would you want for the evidence of the fact? I answer, you would want the testimony of those that did not know any thing about the matter, or you would not accept it, on the plea that they were Mormons, or were about to become Mormons, so being interested in their own testimony, they were not competent witnesses. Yet at the same time no doubt you would have me and the world, swallow down the testimony of Matthew, Mark, Luke, John, Paul, Peter, James and Jude, all at once without choking, who are as much self interested witnesses in their own case and in their own interest as we are, and your little head or heart does not possess good sense enough to successfully dispute it. I suppose you think the force of tradition relative to the scriptures being true, is enough to give you the advantage of me in the case of the nature of valid testimony; with those who are of your own ignorant stamp it may be, but not with the sensible and sound logician and philosopher.

What do you know about the truth of the bible, only by tradition of your fathers, the same as the Mohommedans believe the korn to be true, because of the tradition of their fathers. Hush your clamor and say nothing, and then you will not expose your ignorance and folly. You may ask, how I know the scriptures to be correct? I answer, not for your sake but for the public good, that I know the scriptures to be true, by the revelation of the Holy Ghost; and I know the Book of Mormon to be true, by the same witness, it being the only criterion given in each, to know the truth of either one.

You intimate that the Bible and the Book of Mormon are at issue, relative to the testimony respecting the darkness that covered the earth at the crucifiction of our Lord, I can find no contradiction when seen in the right light, but let you handle it with infidel hands, and it would appear to be a contradiction, and if that should be the game you wish to find apparent contradiction by making it appear so by your sophistry and false garbling I will say to you I am ready for you. I have Mr. C. D. White’s book and Mr. Robert Taylor’s Diegesis before me, those gentlemen are sceptics to the scriptures, in consequence of its contradicting itself in their view, and if you wish to throw stones at your neighbors you had better fortify your own glass house first for fear you might loose your Bible on the same principle. You would like to destroy the Book of Mormon. Relative to the testimony of the Apostles concerning the darkness, it is simply a historical fact of what they saw at Jerusalem, which no doubt was true, as they behold it yet.