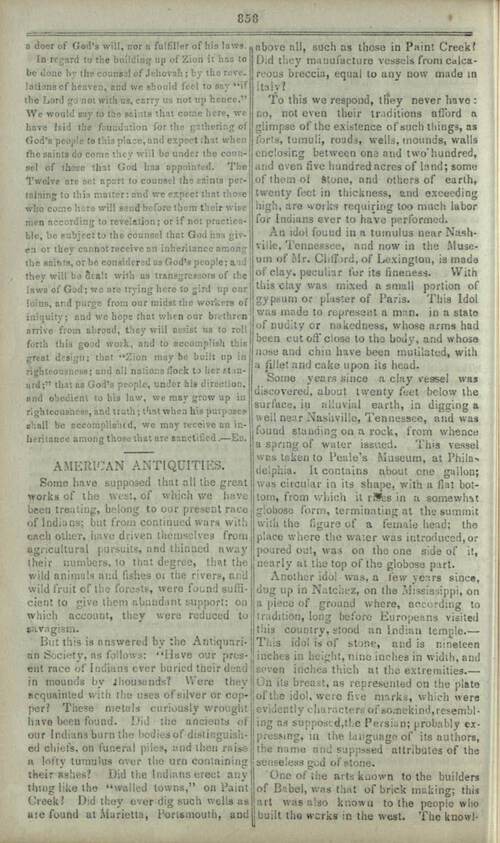 Some have supposed that all the great works of the west, of which we have been treating, belong to our present race of Indians; but from continued wars with each other, have driven themselves from agricultural pursuits, and thinned away their numbers, to that degree, that the wild animals and fishes of the rivers, and wild fruit of the forests, were found sufficient to give them abundant support: on which account, they were reduced to savagism.

But this is answered by the Antiquarian Society, as follows: “Have our present race of Indians ever buried their dead in mounds by thousands? Were they acquainted with the uses of silver or copper? These metals curiously wrought have been found. Did the ancients of our Indians burn the bodies of distinguished chiefs, on funeral piles, and then raise a lofty tumulus over the urn containing their ashes? Did the Indians erect any thing like the “walled towns,” on Paint Creek? Did they ever dig such wells as are found at Marietta, Portsmouth, and above all, such as those in Paint Creek? Did they manufacture vessels from calcareous breccia, equal to any now made in Italy?

To this we respond, they never have: no, not even their traditions afford a glimpse of the existence of such things, as forts, tumuli, roads, wells, mounds, walls enclosing between one and two hundred, and even five hundred acres of land; some of them of stone, and others of earth, twenty feet in thickness, and exceeding high, are works requiring too much labor for Indians ever to have performed.

An idol found in a tumulus near Nashville, Tennessee, and now in the Museum of Mr. Clifford, of Lexington, is made of clay, peculiar for its fineness. With this clay was mixed a small portion of gypsum or plaster of Paris. This Idol was made to represent a man. in a state of nudity or nakedness, whose arms had been cut off close to the body, and whose nose and chin have been mutilated, with a fillet and cake upon his head.

Some years since a clay vessel was discovered, about twenty feet below the surface, in alluvial earth, in digging a well near Nashville, Tennessee, and was found standing on a rock, from whence a spring of water issued. This vessel was taken to Peale’s Museum, at Philadelphia. It contains about one gallon; was circular in its shape, with a flat bottom, from which it rises in a somewhat globose form, terminating at the summit with the figure of a female head; the place where the water was introduced, or poured out, was on the one side of it, nearly at the top of the globose part.

Another idol was, a few years since, dug up in Natchez, on the Mississippi, on a piece of ground where, according to tradition, long before Europeans visited this country, stood an Indian temple.—This idol is of stone, and is nineteen inches in height, nine inches in width, and seven inches thich at the extremities.—On its breast, as represented on the plate of the idol, were five marks, which were evidently characters of somekind, resembling as supposed, the Persian; probably expressing, in the language of its authors, the name and suppssed attributes of the senseless god of stone.

Copper ore is very abundant in many places of the west; and therefore, as they had a knowledge of it, when they first came here they knew how to work it, and form it into tools and ornaments. This is the reason why so many articles of this metal are found in their works; and even if they had a knowledge of iron ore, and knew how to work it, all articles made of it must have become oxydized as appears from what few specimens have been found, while those of copper are more imperishable. Gold ornaments are said to have been found in several tumuli. Silver very well plated on copper, has been found in several mounds, besides those at Circleville and Marietta. An ornament of copper was found in a stone mound near Chilicothe; it was a bracelet for the ancle or wrist.

The ancients of Asia, immediately after the dispersion, were acquainted with ornaments made of the various metals; for in the family of Terah, who was the father of Abraham and Nahor, we find these ornaments in use for the beautifying of females. See the servant of Abraham, at the well of Bethuel in the country of “Ur of the Chaldeans,” or Mesopotamia, which is not very far from the place where Babel stood—putting a jewell of gold upon the face or forehead of Rebecca, weighing half a shekel, and two bracelets for her wrists, or arms. Bracelets for the same use have been found in the west; all of which circumstances go to establish the acquaintance of those who made those ornaments of silver and copper found in the mounds of the west, equal with those of Ur in Chaldea.

The families of Peleg, Reu, Serug, and Nahor, who were the immediate progenitors of Abraham, lived at an era but little after the flood; and yet we find them in the possession of ornaments of this kind; from which we conclude a knowledge both of the metals, and how to make ornaments, as above described, was brought by Noah and his family from beyond the flood.

On the shores of the Mississippi, some miles balow Lake Pepin, on a fine plain, exists an artificial elevation of about four feet high, extending a full mile, in somewhat of a circular form. It is sufficiently capacious to have covered 5000 men. Every angle of the breast work is yet traceable, though much defaced by time. Here, it is likely, conflicting realms as great as those of the ancient Greeks and Persians, decided the fate of ambitious Monarchs, of the Chinese, Mongol descent.

Weapons of brass have been found in many parts of America, as in the Canadas, Florida, &c., with curiously sculptured stones, all of which go to prove that this country was once peopled with civilized, industrious nations,—now traversed the greater part by savage hunters.— Priests American Antiquities.

The Book of Mormon speaks of ores, swords, cities, armies, &c., and we extract the following:—

And it came to pass that we did find upon the land of promise, as we journeyed in the wilderness, that there were beasts in the forests of every kind, both the cow and the ox, and the ass, and the horse, and the goat, and the wild goat, and all manner of wild animals, which were for the use of men. And we did find all manner of ore, both of gold, and of silver, and of copper.

And it came to pass that the Lord commanded me, wherefore I did make plates of ore, that I might engraven upon them the record of my people. * * *

And it came to pass that we began to prosper exceedingly, and to multiply in the land. And I, Nephi, did take the sword of Laban, and after the manner of it did make many swords, lest by any means the people who were now called Lamanites, should come upon us and destroy us: for I knew their hatred towards me and my children, and those who were called my people. And I did teach my people to build buildings; and to work in all manner of wood, and of iron, and of copper, and of brass, and of steel, and of[859] gold, and of silver, and of precious ores, which were in great abundance. And I, Nephi, did build a temple; and I did construct it after the manner of the temple of Solomon, save it were not built of so many precious things: for they were not to be found upon the land; wherefore it could not be built like unto Solomon’s temple. But the manner of the construction was like unto the temple of Solomon; and the workmanship thereof was exceeding fine.

In regard to there being great wars, the following will shew:—

And it came to pass when Coriantumr had recovered of his wounds, he began to remember the words which Ether had spoken unto him . . . he saw that there had been slain by the sword already nearly two millions of his people, and he began to sorrow in his heart; yea, there had been slain two millions of mighty men, and also their wives and their children. He began to repent of the evil which he had done; he began to remember the words which had been spoken by the mouth of all the prophets, and he saw them that they were fulfilled, thus far, every whit; and his soul mourned, and refused to be comforted. . . . . .

And it came to pass that they did gather together all the people, upon all the face of the land, who had not been slain, save it was Ether. And it came to pass that Ether did behold all the doings of the people; and he beheld that the people who were for Coriantumr, were gathered together for the army of Coriantumr; and the people who were for Shiz, were gathered together to the army of Shiz; wherefore they were for the space of four years gathering together the people, that they might get all who were upon the face of the land, and that they might receive all the strength which it was profitable that they could receive. And it came to pass that when they were all gathered together, every one to the army which he would with their wives and their children; both men, women, and children being armed with weapons of war, having shields and breast plates, and head plates, and being clothed after the manner of war, they did march forth one against another, to battle; and they fought all that day, and conquered not. And it came to pass that when it was night they were weary, and retired to their camps; and after they had retired to their camps, they took up a howling and a lamentation for the loss of the slain of their people; and so great were their cries, their howlings and lamentations, that it did rend the air exceedingly.

If men, in their researches into the history of this country, in noticing the mounds, fortifications, statues, architecture, implements of war, of husbandry, and ornaments of silver, brass, &c.—were to examine the Book of Mormon, their conjectures would be removed, and their opinions altered; uncertainty and doubt would be changed into certainty and facts; and they would find that those things that they are anxiously prying into were matters of history, unfolded in that book. They would find their conjectures were more than realized—that a great and a mighty people had inhabited this continent— that the arts sciences and religion, had prevailed to a very great extent, and that there was as great and mighty cities on this continent as on the continent of Asia. Babylon, Ninevah, nor any of the ruins of the Levant could boast of more perfect sculpture, better architectural designs, and more imperishable ruins, than what are found on this continent.

Stephens and Catherwood’s researches in Central America abundantly testify of this thing. The stupendous ruins, the elegant sculpture, and the magnificence of the ruins of Guatamala, and other cities, corroborate this statement, and show that a great and mighty people—men of great minds, clear intellect, bright genius, and comprehensive designs inhabited this continent. Their ruins speak of their greatness; the Book of Mormon unfolds their history.—ED.