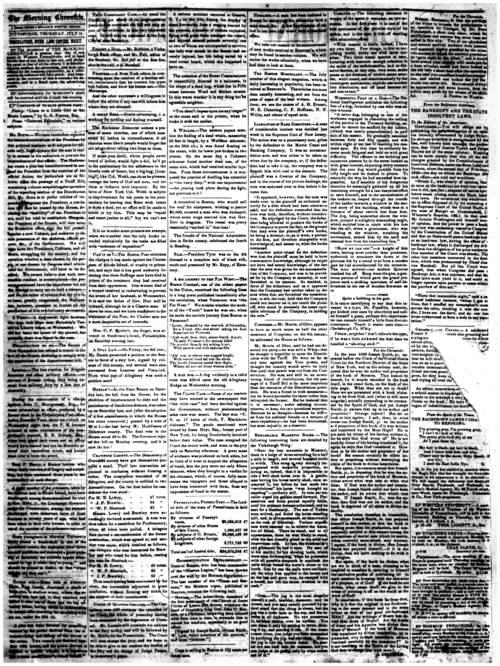 In the year 1829 Joseph Smith, jr., appeared before the Clerk of the United States Court for the Northern District of the State of New York, and on his solemn oath, deposed that he was the author and proprietor of the book of Mormon. This cannot be denied, for it stands recorded in the book itself, in the usual form, on the back of the title page. What then are we to think? Here we are presented with a book claiming to be from God, and (what is still more singular) actually pretending to be translated by the Spirit of God; and yet Joseph Smith, jr. swears that he is its author and proprietor! Strange indeed! But let us look at this matter. I ask, then, in what sense can Joseph Smith, jr. be the author and proprietor of this book, if it was written and translated by the Most High? He is not such by virtue of his having written it, for he says that God wrote it?

He is not such by virtue of his having translated it, for again he says that God translated it. How then is he the author and proprietor of the book? He cannot certainly be either author or proprietor without destroying the claim of the book to divine inspiration.

The conclusion therefore is irresistible, that either Joseph Smith, Jr. has perjured himself in this matter, or that the book is nothing more than his production, and consequently entitled to that respect among the productions of mortal men which its merits, when correctly ascertained, may warrant. I repeat, if the book is divine, then Joseph Smith has perjured himself,—if it is not divine, then we have nothing to do with it in religion.

But again, if the book be divine, what are we to think of a man, claiming to be inspired to translate it, securing to himself the exclusive profits of publishing it? Is such conduct in keeping with the character of a prophet, or of God? If the book be not divine, what name shall we give to the crime of palming it off on the world as the word of God?

In conclusion, if this book be from God, why is it that the original is not forthcoming in the same manner and to the same extent as that of our good old-fashioned Bible? Are the writings of Moses less sacred than those of Nephi? Are the words of Jesus and his Apostles less divine than those of Maroni? If the book of Mormon was translated by divine inspiration, as is pretended, why is each successive edition “revised carefully by the translator?” Is it not insulting to the Spirit of the Living God thus to charge him with error?