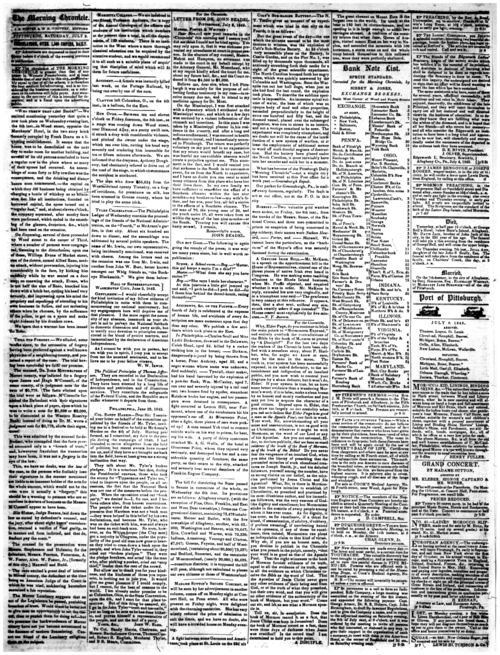 Why, Elder Page, do you continue to blink the main points in “Mormonism Expesed,” and entirely overlook the contradictions of the Bible by the book of Mormon as proved by “A Disciple?” For the last two days the readers of the Chronicle have been edified with a senseless story, about P. Hurlbut, who, for aught we know or care, may be the man in the moon. The truth is, your system has been successfully exposed, in its naked deformity, to the astonishment and indignation of an insulted public, and you now wish to conceal your disgrace by a sham defence; but it won’t do, Elder. If your system is true, let us have some better evidence than a wandering Mormon’s word; if it is false, make a clean breast by an honest and manly confession and you may yet live to acquire the character of a good citizen. Depend upon it, Elder, that you draw too largely on our credulity when you ask us to believe that Elder Page is as good a man as the Apostle Paul; our faith is weak. Your word, Sir, notwithstanding all your noise and asseverations, is not as good with us Christians, whatever it might be with Mormons, as the word of our Lord or any of his Apostles. Are you not ashamed, Elder, to declare publicly, that we have as much evidence of the truth of the Book of Mormon, as of the truth of the Bible? Do you never fear the vengeance of an insulted God, when you take the liberty of preaching that the pretended miracles of such abandoned creatures as Joseph Smith, jr., and his deluded followers, yourself among the number, have as strong claims on our belief, as the miracles performed by Jesus Christ and his Apostles? What, Sir, is there in Mormonism that requires miracles to establish it?

Christianity, as preached and practised by its most illustrious author, and his immediate followers, was the very essence of God-like dignity and excellence; but Mormonism stinks in the nostrils of every people among whom it has ever come. As for dignity, it has none, as for excellence, if a thirst for blood, if assassination, if adultery, if robbery, if profane swearing, if unrelenting hatred for its opponents, if any of these be excellence, then indeed, Mormonism can plead an indisputable claim to that kind of virtue. Why sir, if you are an honest man, do you decline to publish in the Chronicle what you preach in the pulpit, namely, “that your word is as good as that if the Apostle Paul. That the eight witnesses to the book of Mormon furnish evidence of its truth, equal to all the evidence of its truth, equal to all the evidence on which Christians receive the Bible as the word of God. That the Apostles of Jesus Christ never gave any other evidence of their being sent from God, or of the truth of what they preached, but their own word, and that you will give no other evidence of the authenticity of the book of Mormon, but your word.” Come out sir, and let us see what a Mormon apostle is.