“I have a few questions to ask Elder John E. Page:” 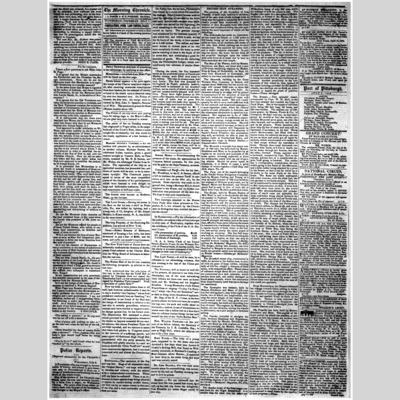 I have a few questions to ask Elder John E. Page:

It is agreed that the Mosaic supercedes the Patriarchal, and the Christian the Mosiac Institutions. Now, sir, do not the Mormons teach that Mormonism is to supercede Christianity in a similar manner?

In the same sense that Moses is regarded as the author of Judaism, and Jesus Christ of Christianity, do not the Mormons insist that Joseph Smith, Jr., is the author of Mormonism?

God appeared in awful sublimity on Mt. Sinai, and spoke audibly in the hearing of the whole congregation of Israel to establish the mission of his servant Moses; the spirit of God decended in the form of a dove and rested on the head of Jesus, and a voice was heard from Heaven (by a vast multitude assembled to attend to John’s baptism,) saying this is my beloved son in whom I am well pleased, in order to establish the authority of the Son of God in and over the Christian Church. Now sir, tell us when and where and how and before whom has God ever appeared to establish the authority of Joseph Smith, Jr.?

It is pretended that Mormonism is to place the world in possession of those unspeakable blessings so gloriously described in the vision Isaiah “The wolf shall dwell with the lamb, and the leopard lie down with the kid, and the calf and young lion, and the fatling together, and a little child shall lead them. And the cow and the bear shall feed, their young ones shall lie down together: and the lion shall eat straw like an ox, and the suckling child shall play on the hole of the asp, and the weaned child shall put his hand on the cockatrice’s den.” Now sir, how do you reconcile the introduction of this most happy and peaceful state just described, with the military spirit and character of Gen. Joseph Smith, Jr., and the marshalling and disciplining of soldiers at Nauvoo?

Do not the Mormons claim America as the land promised them, in the same sense as Canaan was promised to the Jews anciently?

Do not the Mormons regard the people of these United States, who refuse to embrace their superstition, as Gentiles and speak of them as such?

Will it not become the duty of every Mormon as soon as they feel themselves able, to attempt to drive out these Gentiles from the land of promice?

Is it not the essence of Mormonism to carry conviction to the hearts of unbelievers on the points of their bayonets, and eventually to preach their doctrines from the mouths of their cannon?

Has not Gen. Joseph Smith, Jr., the pretended prophet of the Lord, High Priest after the order of Melchisideck, etc. found it necessary to detail a body guard on account of a very general impression that he hired ruffians who attempted to assassinate Gov. Boggs?

Is not assassination not only permitted, but actually commanded in the case of dissenters from the Mormon faith?

Is it not the design of the leaders of Mormonism to establish a Western Empire?

Elder Page may flounder and call names, but I assert confidently that Mormonism actually professes the introduction of a new religion and a new government. I am not mistaken, neither am I exaggerating facts, but declaring a sober and most startling truth. As a Christian I feel concerned for the souls of my fellow men, and as an American alarmed for the consequence of this delusion to my country.