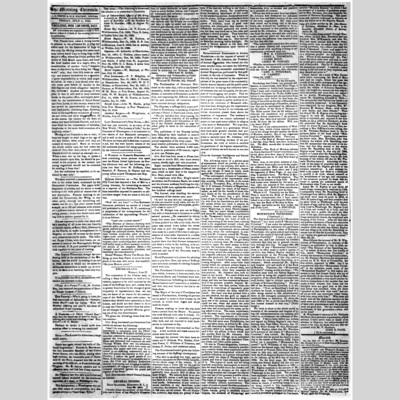 The first book referred to by “Mormonism Exposed” is a book entitled “Mormonism Unveiled.” I am under the necessity here of introducing the testimony of a gentleman of Philadelphia, by the name of Benjamin Winchester, who gives a short and clear account of the origin of the book called “Mormonism Unveiled.” I have a copy of it before me, and I am informed by credible authority that they are in general circulation through this city. On pages 288, 289 and 290, of this “Mormonism Unveiled,” there is an effort made to make it appear, if possible, that Sidney Rigdon obtained an old manuscript at the Printing Office of Lambdin & Patterson, of this city, said to be written by one Solomon Spaulding, as a romance; which manuscript Mr. Rigdon new fangled over and made of it the Book of Mormon. Therefore, the “Mormonism Unveiled’s” closing words are these: “We therefore must hold out Sidney Rigdon to the world as being the original author and proprietor of the whole Mormon conspiracy, until further light is elicited upon the lost writings of Solomon Spaulding.” On page 289 of the “Mormonism Unveiled,” it is stated thus: “Now, as Spaulding’s book can nowhere be found, or anything heard of it after being carried to this establishment, there is the strongest presumption that it remained there in seclusion, till about the year 1823 or ’24, at which time Sidney Rigdon located himself in that city.” (Pittsburgh.)

We wish to show the whole world an example of the measures and lengths of lying and misrepresentation our enemies will resort to, to counter act the influence of Mormonism. I have a letter before me, written and signed by Sidney Rigdon’s own hand, bearing date, Post Office, Nauvoo, Jan. 17, 1842, to Elder George W. Gee, Pittsburgh. In it Mr. Rigdon states that Mr. Winchester’s account of the origin of “Mormonism Unveiled,” was correct. Mr. Rigdon further states that he moved his family to this city in the month of February, 1823. I have before me a pamphlet, “Mormonism exposed,” by S. Williams, of this city, who states on the second page, that Sidney Rigdon moved to Warren, Ohio, from which he came to this city, and connected himself with the First Regular Baptist Church, then in its infancy, on the 28th day of January, 1822. On the third page, Mr. Williams states that Sidney Rigdon left this city and moved to the Western Reserve in 1824.—Mr. Rigdon consents to the account of Mr. Winchester of Phila. in stating that he left Pittsburgh in the year 1826. The reader is here requested to keep his eye on the statement in “Mormonism Unveiled,” as above noticed, that “Spaulding’s book can nowhere be found, or anything heard of it after being carried to this establishment,” (Patterson’s Printing Office.) I have before me the August number (of 1840) of a monthly periodical published in Cincinnati, entitled “Monthly Record,” in which I find an account of a number of questions proposed to Mrs. Davison, who was formerly the consort of Solomon Spaulding. The questions and answers originated as follows; as they lay before us in the Monthly Record.

“Your brother Jesse passed through Monson, where he saw Mrs. Davidson and her daughter Mrs. M’Kinstry, and also Dr. Ely, and spent several hours with them, during which time he asked them the following questions, viz:—Have you read the Book of Mormon? I have read some in it. Does the manuscript describe an idolatrous or a religious people? An idolatrous people. Where is the manuscript? Dr. Philaster Hurlburt came here and took it, said he would get it printed, and let me have one half of the profits. Has Dr. P. Hurlbut got the manuscript printed?

I received a letter stating it did not read as they expected, and they should not print it.”

I have before me a copy of Mrs. Davidson’s letter concerning the Book of Mormen and its origin, which has gone the rounds of the public newspapers of the age. In this letter, Mrs. Davidson who was formerly the widow of Solomon Spaulding, says, “at length the manuscript was returned to its author, and soon after, we removed to Amity, Washington county, Pa., where Mr. Spaulding deceased in 1816.—The manuscript then fell into my hands and was carefully preserved. It has frequently been examined by my daughter, Mrs. M’Kinestry of Monson, Mass., with whom I now reside, and other friends.” Thus the idea of Mr. S, Rigdon ever having anything to do with Mr. Spaulding’s manuscript is exploded, and exposed to the four winds, to be a nefarious falsehood, as also the statement that Mr. Spaulding’s book could no where be found, when, in fact, according to Mrs. Davidson’s own telling, she let Mr. Philaster Hurlburt have it, the legitimate father of the book called “Mormonism Unveiled.” Again, let us see how the dates tally, Mrs. Davidson, who was formerly the widow of S. Spaulding, says that the manuscript was returned to its author, and that they moved to the Amity where Mr. Spaulding died in 1815. Mr. Rigdon never lived in this city till 1822, some 6 or 7 years after Mr. Spaulding died, and his romance manuscript, was in the safe keeping of his widow, till she let Mr. Philaster Hurlbut have it. Admitting all this, I ask in the name of propriety and consistency, how did Mr. Rigdon get hold of the romance manuscript. A poor attempt indeed to fix names and dates to a falsehood to qualify it as truth, shame! shame!! to the wickedness of the age, and corruption of the measures pursued by those that attempt to oppose the undaunted march of Mormonism alias Truth in our world.

Again Mr. S. Rigdon is now about 49 years of age, consequently was born in 1793, consequently when Mr. Spaulding lived in Pittsburgh from 1812 to 1816, Mr. Rigdon’s age must have been 16 years in 1812; at 1816, 23 years of age, and then consider that he never lived in Pittsburgh until he was 29 years of age, and at the time Mr. Spaulding lived in Pittsburgh Mr. Rigdon lived on a farm and worked on a farm, and did not enter into a public life until the 26th year of his age, three years after Mr. Spauldings manuscript was in the hands and safe keeping of his widow. After all this clear and precise statement of facts that cannot be refuted even in this city, if any person can swallow down the idea that Sidney Rigdon had anything to do with the Spaulding romance can do like the hypocrites of old, they can “strain at a gnat and swallow a camel.” Matt. 23, 24.

Here follows the account of Mr. B. Winchester of Philadelphia, (a minister of the Gospel,) as published by him in 1840, entitled: “The Original of the Spaulding story,” in which is shown that the bundle of lies, called “Mormonism Unveiled.” is worthy the character of its legitimate author, viz: Dr. Philaster Hurlburt, but adopted and printed by E. D. How of Painesville, the first edition appeared in 1834. Let it be remembered that this “Mormonism Unveiled” is the principle touch stone of the “Mormonism Exposed” to find eighty witnesses to say that Joseph Smith was not of good character at the time the Book of Mormon was published; a very small number indeed in comparison to the number that was ready to bear witness that Jesus and his disciples were not good men at the time that Jesus was crucified, when the Jews “gnashed on him with their teeth” and cried out as with one stentorian voice “away with him, away with him.” Who does not know that all the righteous martyrs on the earth were put to death because the people of their own acquaintance said the prophets were not good men. Oh! the weakness and foolishness of this generation—when will ye be wise?

B. Winchester’s account of Dr. Philaster Hurlburt from personal acquaintance, which I have never seen or heard of any attempt to disprove, but acknowledged by many to be true, by those who are also acquainted with Mr. P. Hurlburt.