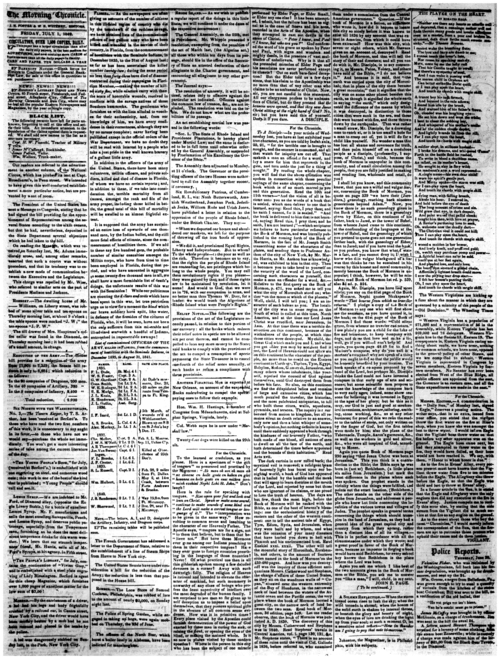 To A Disciple:— In your article of Wednesday last, you have at last exhibited your true character, as you are told by Isaiah xxix, 20, 21, “for the terrible one is brought to nought, and the scorner is consumed, and all that watch for iniquity are cut off. That maketh a man an offender for a word, and lay a snare for him that reproveth in the gate, and turn aside the just for a thing of nought.” By reading the whole chapter, you will find that the above quotation was spoken in connection with those peculiar sayings of the same chapter, concerning the book which is of so much marvel to you and this generation. Read the 10th and 11th verses—“And the vision of all is become unto you as the words of a book that is sealed, which men deliver to one that is learned, saying: Read this, I pray thee; and he saith I cannot, for it is sealed.” “And the book is delivered to him that is not learned, saying: Read this, I pray thee; and he saith, I am not learned;”—which scriptures we believe to have particular reference to the Book of Mormon, and was literally published in the coming forth of the Book of Mormon, in the fact of Mr. Joseph Smith transcribing some of the characters of the plates, and sending them to Professor Anthon of the city of New York, by Mr. Martin Harris, as Mr. Anthon has acknowledged, was exhibited to him in that city. Then it becomes you to take heed to yourself on the veracity of the word of the Lord, concerning such characters as yourself, that make a man an offender for a word, &c.—

Relative to the first query on the Book of Mormon, p. 471, you asked me to tell you what the city of Moronihah stood on; whether “on the moon or which of the planets.” Well, child, I will tell you; I am an instructor of such babies as you. The locality of the city was in some region on the South of what is called at this time, North America, and at the time our Lord Jesus Christ was crucified, near Jerusalem, in Asia. At that time there was a terrible destruction on this continent, because of the wickedness of the people, at which time those cities were destroyed. My child, the Great God which made you and I, and when you get older you may by accident find it out, the Lord of Heaven could not allow sin on this continent in the character of the people, no more than he could on the Eastern continent in Carthage, Thebes, Tyre, Egypt, Babylon, Sodom, Gomorrah, Jerusalem, and many others whose inhabitants, like yourself, rejected the council of God against themselves, until God destroyed them from before his face. So also, on this continent we find the dilapidated relics and remains of large and extensive cities, which has much puzzled the traveler, the historian, and the most celebrated antiquarian, to tell who built these cities, walls, aqueducts, pyramids, and teraces. The inquiry is reverberated from nation to kingdom, but all remains silent as death relative to an answer, only now and then a faint whisper of somebody’s opinion, but nothing definite is known until there suddenly appeared a book through the kindness of our heavenly Father, “who hath made of one blood, all nations of men to dwell on all the face of the earth, and hath determined the times before appointed and the bounds of their habitation.” Read Acts xvii.

The dark curtain is now rolled back; the mystical veil is removed; a refulgent beam of heavenly light has burst upon our benighted world; a book of God has appeared that is hailed by the humble and the meek that will stoop to learn doctrine at the mouth of the Lord, and rejected by none but those who are ignorant of its claims, or too proud to love the truth of heaven. The days are but few, thank the most high, before the Book of Mormon will be ranked with the Bible, as one of the best of heaven’s blessings: one the ecclesiastical history of the eastern and the other of the western continent: one to tell the ancient tale of Egypt, Tyre, Edom, Syria, and Jerusalem, when they were built and by whom, and what was the occasion of your many disasters that have hurled you down to hell with Pharaoh and his uncircumcised host. Read Ezekiel xxxi. xxxii. The other will tell the mournful story of Horonihah, Zarahemla, and others, to the amount of fourteen cities named in the book of Mormon on the 459-480 pages. And how was you destroyed? was the inquiry of those efficient antiquarians Messrs. Catherwood and Stephens, the charge d’affairs of these United States, as they sit on the wondrous walls of “Copan,” situated near the western extremity of the Bay of Honduras, in the narrowest neck of land between the waters of the Atlantic ocean and the Pacific ocean, the very place where the book of Mormon located a great city, on the narrow neck of land between the two seas. Read book of Mormon, 3d edition, page 549. Let the reader observe, that the book of Mormon was published A. D. 1830. The discovery of this city by Messrs. Catherwood and Stephens was in 1840. Read Stephens’ travels in Central America, vol. i. page 130, 131, &c. Mr. Stephens states, “There is no account of these ruins until the visit of Col. Galindo in 1836, before referred to, who examined them under a commission from the Central American government.” Question.—If the book of Mormon is a fiction, no difference who wrote it, how did it happen to locate this city so nicely before it was known to exist till 1836 by any account that was extant in America, from which it could have been extracted? How was this city, with seven or eight others, which Mr. Stevens gives us an account of, destroyed? Read the book of Mormon, and that will tell the story of their sad disasters; and all you can do with it, Mr. Disciple, is to say concerning it, as Messrs. Paine, Volney, and others have said of the Bible, “I do not believe it.” And because it is said, that “the earth was carried upon the city of Moronihah; that in place of the city there became a great mountain;” that it signifies that the city was on some other planet besides this earth, as though it signified the whole earth in saying “the earth,” which only designated the difference of the means by which it was destroyed, in distinction to those cities that were sunk in the sea, and those that were burned with fire, and those thrown down by the earthquake. That was rather a small straw, Mr. Disciple, for a drowning man to catch at, or it is too small a hole for a man to creep out of, yet it will do for a child like yourself. No wonder a man that has lost all shame and reverence for truth, and then palm himself off on a credulous people as a disciple, (professedly, I suppose, of Christ,) and think, because the book of Mormon is unpopular in this community, and of small circulation among the people, that you are fully justified in making and vending lies, wholesale and retail, do you?

I shall let you know, and this community know, that you are a wilful and vulgar liar; sir, concerning the Book of Mormon, you quote on page 539 “we have their (Jaredites,) geneology, reaching back nineteen generations beyond Adam.” Now, you know there is no such geneology given in the Book of Mormon; there is a geneology given by Ether, on this continent of his father, back to Jared, at the tower of Babel, from whence Jared came to this continent, and the confounding of the languages at the tower of Babel, and the geneology of which you pretend goes not one generation farther back, with the geneology of Ether, than to Jared; and if you have read the book, as you profess, you know that what I state is a fact, and you cannot deny it; I wish I knew who this vulgar blackguard of a liar was that thinks he can be sustained in his course by this honest and moral community, merely because the Book of Mormon is unpopular; I think, however, he will be mistaken; read Book of Mormon 1st ed. p. 539, also 3d ed. p. 524.

Again, Mr. Disciple, you have lied most vilely; you say on the 61st page of the Book of Mormon, Nephi quotes Shakespeare’s words “That bourne from which no traveller returns. ” I pledge a copy of the Book of Mormon to any one who will first show me the sentence, as you have quoted it, in the book; on the 61st page of the Book of Mormon I find these words: “Cold silent grave, from whence no traveler can return.” I see plainly you are a child for the lake of fire and brimstone, to keep company with dogs, and those that love and make a lie, well, go if you will—I can’t help it! And again, you quote page 48 49 for to find a Mariner’s compass; why do you call it a mariner’s compass? why not speak of a thing as you ought to do? so that the public would be honestly benefited by your treatise. The book speaks of a compass prepared by the hand of the Lord, but perhaps Mr. Disciple thinks the Lord could not have invented a compass in that early age of arts and sciences; but some scientific men propose to trace the knowledge of the compass back to very early ages; indeed, some show reasons for believing it was invented in Egypt in the ages of her glory; but be this as it may, our God is just and good at mechanical inventions, architecture, tailoring, smithing, stone working, &c., as at any other business; for proof of this we refer the reader to the tables of stone, not only written on by the finger of God, but the first tables were made by him; also the plans of the Tabernacle, Temple, Aaron’s garments, &c., as well as the workers in gold and silver, &c., who were all inspired of God, according to Moses.

Again you quote Book of Mormon page 290 saying “that Jesus Christ was born at Jerusalem.” This you think is a contradiction to the Bible; the Bible says he was born in (not at) Bethlehem, (a little place six miles from Jerusalem.) but mark the least difference in the places where each was spoken. One prophet stands in the vicinity where the things were fulfiled, and points out the exact location, (Bethlehem.) The other stands on the other side of the globe from Jerusalem, and addresses a people who know but little concerning the localities of the various towns and villages of Judea. The prophet speaks in general terms concerning the things which should transpire in the land of Jerusalem, as they had a general idea of the great capital city and country from which they sprang, rather than a distinct idea of all its villages.—This is in perfect accordance with all the circumstances under which they wrote; and a great proof in favor of the Book of Mormon, because an impostor in forging a book would have said Bethlehem, for every school boy knows that Bethlehem is the place where the Lord was born.

Again you ask me which I like best of the two accounts given in the Book of Mormon or the Bible, you ask me to answer you “like a man,” I will, child, in my next.