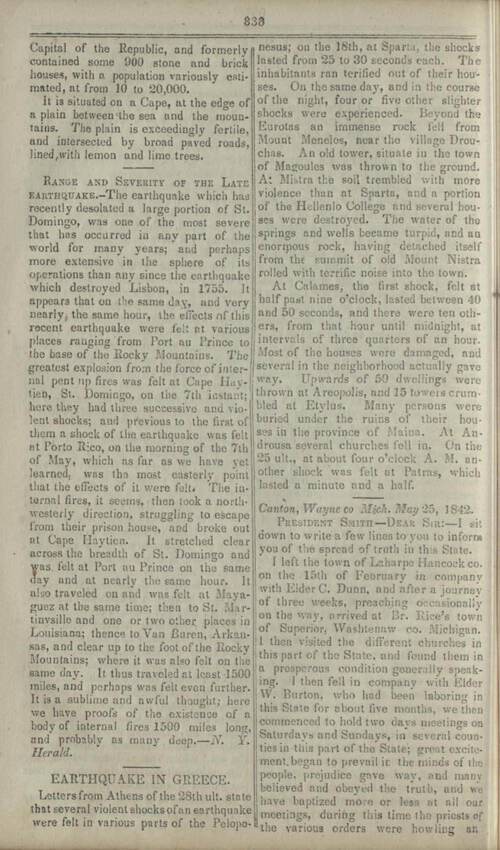 PRESIDENT SMITH—DEAR SIR:—I sit down to write a few lines to you to inform you of the spread of truth in this State.

I left the town of Laharpe Hancock co. on the 15th of February in company with Elder C. Dunn, and after a journey of three weeks, preaching occasionally on the way, arrived at Br. Rice’s town of Superior, Washtenaw co. Michigan. I then visited the different churches in this part of the State, and found them in a prosperous condition generally speaking. I then fell in company with Elder W. Burton, who had been laboring in this State for about five months, we then commenced to hold two days meetings on Saturdays and Sundays, in several counties in this part of the State; great excitement began to prevail in the minds of the people, prejudice gave way, and many believed and obeyed the truth, and we have baptized more or less at all our meetings, during this time the priests of the various orders were howling an [838] their followers crying delusion, false prophets, Mormonism &c., but the honest in heart were believing the gospel of Christ, and began to say to the ministers, why dont you come out and meet them in a fair open discussion and prove them false, and then we shall be satisfied; so one of their noble champions by the name of C. Davy, a Methodist minister, challenged us for a discussion on the subject of the Book of Mormon, and said that he could prove it false from the writings contained therein and the scriptures. I accepted the challenge, the time was then appointed that the discussion should commence, which was Monday the 23d of May at 10 o’clock A. M. in the town of Royal Oak, Oakland co., great excitement prevailed amongst the people, and at the appointed time, there was an assembly of between 400, and 500 people: the question for discussion was to prove the Book of Mormon to be of divine origin, and that it came forth, according to the predictions of the prophets— decision to be given according to the weight of argument advanced, the limited time for each to speak was 20 minutes at a time. We each of us chose a man, and they chose the third, who were to sit as judges: the congregation was then called to order, and I opened the discussion. We then spoke three times on each side, there was given an intermission of half an hour, we then continued the discussion and spoke four times each and then submitted the question for decision, the judges then gave the decision in favor of the Book of Mormon; the congregation was then dismissed and I heard many of the Methodists say they wanted no more to do with Methodism, and many others that came that morning expecting to hear the Book proved false and Mormonism fall to rise no more because their teachers had thus flattered them it would be the case, but they had to return to their homes in despair, and their priests quit the field with shame and anguish of heart, because they had not gained their points, and thus the little stone cut out of the mountain without hands, rolls forth propelled by the power of Israel’s God and will continue to roll until it becomes a great mountain and fills the whole earth. Therefore I desire the prayers of all the Saints, that I may be upheld by the arm of Jehovah, and sustained through all the trials of subsequent life.

I remain your friend and brother in the new and everlasting covenant,