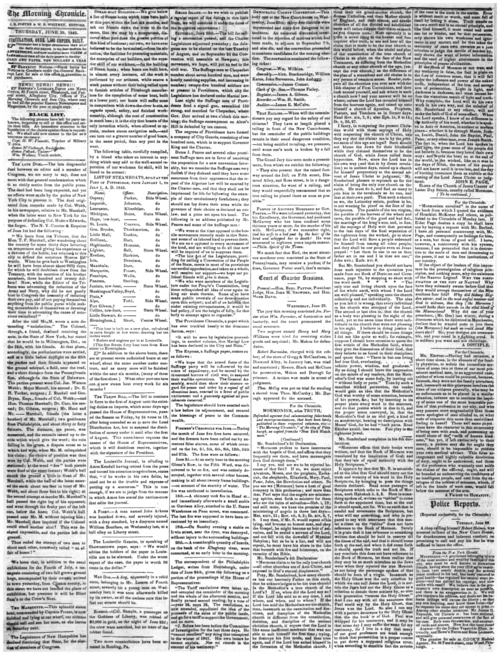 Defended against foul caluminating falsehoods and misrepresentations, that have been lately published in those respected columns, viz:—“The Morning Chronicle,” of the city of Pittsburgh, as copied from the “New York Watchman.”

“Mormons profess to have intercourse with the Angels of God, and affirm that they frequently see them, and have messengers from God through them.”

I say yes, and are we to be rejected because of that fact? If so, we must reject Abraham, Moses, and the prophets, Zachariah, the shepherds, Elizabeth, Mary, Paul, Peter, John, the Revelation and others. So you see we (Mormons) have a host of good company in this profession; and more than that, Paul says that the angels are ministering spirits, sent forth to minister for them who are the heirs of salvation—Heb. i, 19; and still more, we have the promise of the ministering of angels in these last days—Mat. xxiv, 31; Rev. vii, 2, 3; Ib. xiv, 6, 7, 8. I say then, if Mr. S. would repent of his lying, and become an honest man, and obey the Gospel, he might become an heir of salvation, and be sealed a servant of the Lord, and not fall with the downfall of Mystical Babylon; but as he is a liar, and will not repent, he must have his share in the lake that burneth with fire and brimstone, on the veracity of the Bible.

“Mormons claim to be the only true church—all other churches are of Anti-Christ, and exposed to God’s eternal displeasure.”

Pray, Mr. Sunderland, how many churches has our heavenly Father on this earth, that he acknowledges to be his true church? Is the Methodist’s a true church of the Lord’s? If so, when did the Lord say so? If the Lord has said so at any time, I ask where, and when, and to whom? If the Lord has said the Methodists are his church, then, inasmuch as the constitution and doctrines, and discipline of the Methodist church is different from the constitution, doctrine, and discipline of the ancient christian church, it argues that the Lord is like some inefficient mechanic that was not able to suit himself the first time; trying, he destroys his first mode, and then tries again, and if the Lord has suited himself in the formation of the Methodist church, I think their old grand-mother church, the Roman Catholics, and their Mother church of England, and their sisters, and cousin churches of all the divided and subdivided sects will rather dispute their claim as much as you dispute ours. Most certainly it is quite a novel thing to the honest and free inquirer after truth, to see and hear all the claim that is made to be the true church in this world below, when the model and plan of the constitution of the true church of Christ is as plain on the face of the New Testament, as differing from the Methodist church or any other church of the age, (except the true church,) as the difference of the plan of a steamboat and old chaise is to any person of common sense. Reader, compare all the churches you ever saw with the 12th chapter of First Corinthians, and then look around yourself, and ask where is such a church now? and your answer will be no where; unless the Lord has revealed himself from the heavens again, and raised up unto himself a church of Apostles, Prophets, Pastors, and Teachers as in former days.

I fancy, in comparing the present Christian world with those sayings of Holy writ respecting the church of Christ, can they say that the claims made by the present sects of this age are legal? Such should not blame the Jews for their blindness while they claimed themselves to be the church of God, while Jesus called them hypocrites. Now, since the Lord has in his own way (and that is by direct revelation) as in ancient days, raised up a church for himself preparatory to the second advent of Jesus Christ to judgment, Mr. Sunderland pleases to reproach us for the claim of being the only true church on the earth. He must do it, and find as many to join him in the cavalcade as he can, and that at their own peril. That such a church as we, the Latterday saints, profess to be, is not wanting for proof on the face of the Scriptures. The parable of the ten virgins, the parable of the harvest of the wheat and tares, the parable of the good and bad fish, the marriage of the king’s son; and, in fine, all the sayings of Holy writ that pertains to the last days of the final separation of the righteous from the wicked, go to show that the Lord will have a people redeemed for himself from among all other people; and they shall be one people even as Jesus prayed: “Let them be one in me as thou father art in me and I in thee are one;” John xvii.; Zach. xvi. 9.

But Mr. Sunderland you should not have done such injustice to the quotation you made from our Book of Doctrine and Covenants, page 76, by stopping so short with the word earth. *

* * * “The only true and living church upon the face of the whole earth, with whom I the Lord am well pleased,” speaking unto the church collectively and not individually. The idea as you left it is wrong, that every individual in the church was accepted of the Lord. The second or last idea is, that the church as a body was pleasing in the sight of the Lord, yet at the same time there were individuals in the church that were not pleasing in his sight. I believe in doing justice to all things. If there should be some things I do not like quite so well; for example, suppose I should have occasion to quote the first article of the Methodist faith, where they give the dimensions of their God, that they believe in as found in their discipline; and quote thus: “There is but one living and true God, everlasting, . . . . of infinite power, wisdom and goodness.” By so doing I should leave the impression on the minds of my readers, that the Methodist’s God was some body, by leaving out “without body or parts.” Thus by such a manifest wicked perversion, the reader would gain an idea that the Methodist’s God was worthy of some attention, because of his power, &c.; but by inserting in its proper place every word in the sentence, and do that justice which is due to it, and the proper sense conveyed, is, that the Methodist’s God is an idol god, a kind of a nondescript, bearing no description with Moses’ God, for he had “back parts. Read Exodus xxxiii. last verse. Fair play is the righteous jewel.

“Mormons affirm that their books were written, and that the Book of Mormon was translated by the inspiration of God; and that they are of equal authority with the Holy Scriptures.”

It appears by this that Mr. S. is astonished at the idea that God should carry out the truth and veracity of his word in the Holy Scriptures, by bringing to pass the things therein declared.

Read some passages of Scriptures which refer to the Book of Mormon, such as Habakuk ii. 2, 3.

Here is something spoken of, written on “tables” to come forth at the appointed time, but at the end it should speak, not lie. Who on earth that is candid and reverences the Scriptures, but what will say something, and who is prepared to say with assurance that this matter written on the “tables” does not have reference to the Book of Mormon. Surely it is plain that it has reference to something written that should be held in reserve till the times of the end, and that it should come forth at the end, and when it did come forth it should speak the truth and not lie. If any conclude this does not have reference to the Book of Mormon, let them realize that they may be as much mistaken as the Jews were when they rejected the true Messiah as not being the personage spoken of that should be born of a virgin. Inasmuch as the Holy Ghost was the only criterion by which we can call Jesus the Lord, it is certain the Jews had not the Holy Ghost as a criterion to decide these matters by, so also this generation “resists the Holy Ghost.” And I can say with all the assurance that Paul could say by the Holy Ghost, that Jesus was the Lord. So also I can say with a perfect assurance by the Holy Ghost that the book is of God. Paul was whipped for his testimony, and it may be that some day I may suffer the same for my testimony, for I live in a day that many of our good professors are weak enough to think that persecution is a proper course to put down a supposed religious error, when according to sensible fact the reverse of the case is the truth in the matter. Error is without merit or worth, and must fall of itself by letting it alone. Truth stands on its own merit and is an eternal principle, and like God himself, it must stand and none can let or hinder, and he that persecutes, only shows his own weakness and ignorance in any matter; and he that takes the testimony of ones own enemies as a just criterion to judge the merits of another by, only shows the want of better information and the need of higher attainments in the principles of proper civilization.

If the Book of Mormon is not true, and my testimony is false, the fact is plain on the face of common sense, that it will fall under the influence and power of the naked truth, independent of the iron and savage arm of persecution. Light is light, and darkness is darkness, and must retreat before the victorious march of light and truth. Why complain, the Lord will do his own work in his own way, and the unbelief of Mr. Sunderland or any others, will not make the faith of God of none effect. When the Lord speaks, I know of no difference in the authority of his word, whether it is spoken in Asia or America, in ancient or modern times—whether it be through Moses, Joshua, Isaiah, Daniel, John the Baptist, Paul, Peter, or any other man, even Joseph Smith. The fact is, when the Lord has spoken in past ages, the great mass of the people did not believe it, because they loved their own ways and words the best; so at the end of the world, or the wicked, like as it was in the days of Noah, the mass of the people will not know until it is too late, and the day of burning consumes them as stubble at the coming of the Lord Jesus Christ to judgment.