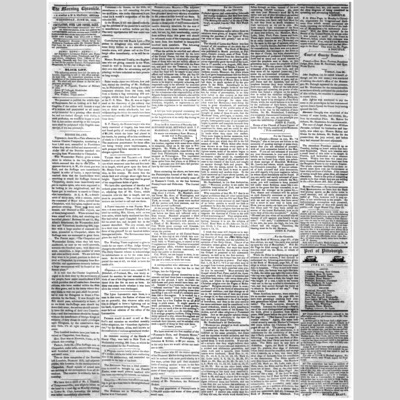 In the Book of Mormon, page 471, of the first edition, we read “the earth was carried up upon the city of Morourhah.” Will Elder Page be kind enough to tell us what this city stood on; the Moon, or which of the planets?

These Jaredites, however, were remarkable on another account. On page 539, we have their genealogy reaching back nineteen generations beyond Adam. Most veritable! The book, however, abounds in wonders. Instance the following:—Nephi, one of the most distinguished personage in the book, gives a quotation from Shakespeare, 2000 years before the poet was born.

See page 61. “That bourne from which no traveler returns.” Again, this same individual actually uses the Mariner’s Compass 600 years before the Christian Era. See pages 48 and 49. ’Tis passing strange!

In the midst of all our admiration, it is unfortunate for the credibility of the book that it flatly contradicts the Bible. See the following. On page 240, the Book of Mormon says that Jesus Christ was born at Jerusalem. The Bible says he was born at Bethlehem. Again, the Book of Mormon, page 51, predicts three days of darkness when Jesus should be crucified; and on page 446, it records, as a fact, that there were three days of darkness from his crucifixion to his resurrection The Bible speaks of only three hours of darkness. See Matthew xxvii. 45; Mark xv.

23; Luke xxiii. 44.—Here, then, the Bible and the Book of Mormon are at issue. One or the other must be wrong. Which is it, Elder Page? Answer me like a man. If the Lord be God, worship him; but if Baal be God worship him. Come, sir, declare which you prefer to believe in this matter. The two are irreconcilable; they contradict each other pointedly, not in a question of doctrine, but one of fact. Here, sir, is a matter that a child can understand, and, sir, it stamps the Book of Mormon with falsehood. You may flounder, but, sir, you cannot escape the deep disgrace of being concerned in spreading and advocating falsehood.