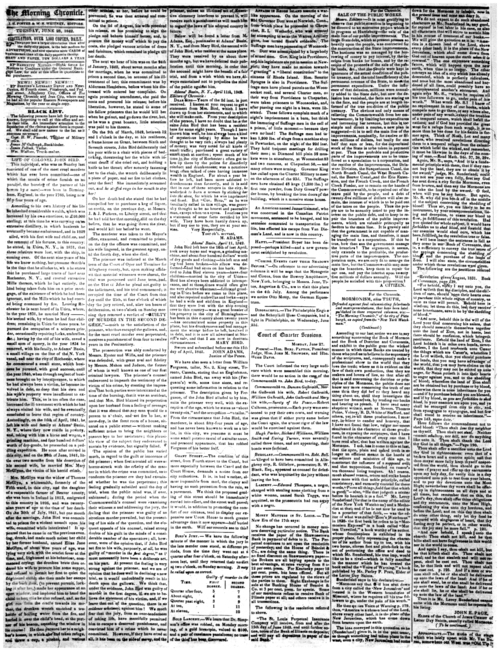 Defended against foul calumninting falsehoods and misrepresentations, that have been lately published in those respected columns viz:— “The Morning Chronicle,” of the city of Pittsburgh, as copied from the “New York Watchman.”

According to our last notice we are to say something concerning the Book of Mormon and the Book of Doctrine and Covenants, and exhibit to the public gaze the wicked manner in which these Books are treated by those who profess to believe in the supremacy of the scriptures, and, consequently make a professional show to the world that they love the truth; where as it is evident on the face of their own productions, that they are makers and lovers of lies, so that after all that is said concerning the doctrine or principles of the Mormons, the public does not know any more concerning the truth of our case than they did before they heard any thing about us, until they investigate the matter for themselves, by reading our books and hearing us preach. I have read many skeptical writers, such as Messrs. Thomas Paine, Volney, B. D. White of Stafford, and others, yet in all these productions, I must say, in honor to candor and honesty, that I have not found that low, valgar meanness manifested in the character of those gentlemen, in exposing the scriptures, that I have found in the character of every one that I have read after, that has written against the Mormons. I ask, has it come to this at last, that the open, plain and naked truth is no longer an efficient means in the hands of our editors and ministers of this age, to counteract the influence of a supposed evil; and that supposition, founded on rumor’s ten thousand lieing tongues. Ah! reason, much abused reason, return and strike hands once more with that noble principle, called consistency, and earnestly contend for these words, “Prove all things, hold fast that which is good;”—also, “He that judgeth a matter before he heareth it is a fool.” Mr. Leroy Sunderland (for that is the name of the editor of the New York Watchman) and a Methodist at that; and if he is not now he used to be a preacher of that faith,—was the editor of what was called “Zion’s Watchman” in 1838 - the first book he refers to in “Mormonism Exposed” is a book called “Mormonism Unveiled,” a book worthy of its author, whose frontisepiece is exhibited in its proper place, fully representing the character of its author from tip to toe, with his two horns, cloven foot and pitch-fork in the act of performing the office and deed to which Mr. Sunderland, his true imp, would like to be a rival—which is fully manifest in the manner which he has treated the book called the “Voice of Warning,” a book published by Mr. Parley P. Pratt, Elder of the Latter Day Saints.

Sunderland says in his declaration:—

“Mormons say that God has sent down from a city called the ‘New Jerusalem’ and located it in the Western boundaries of Missouri, where he requires all his true followers to go, under the pain of his wrath.”

He then quotes Voice of Warning p. 179. thus, “America is a chosen land of the Lord, above every other land, it is the place of the New Jerusalem, which has come down from heaven upon the earth.

The idea conveyed in this quotation as he (Sunderland) gives it, is in the past tense, as though something had taken place in the west, even a city, New Jerusalem had come down for the Mormons to inhabit, now in the present tense and none can deny it.

We do not expect to do such abandoned characters as Mr. Sunderland is, any good, for reproof is lost labor in his case, as also all characters that will strive to sustain him in his course of treatment of our books.—We will give the quotation as it is: “America is a chosen land of the Lord, above every other land; it is the place of the New Jerusalem, which shall come down from God out of heaven upon the earth when it is renewed. ” The one expresses something future, which will happen upon the new earth, when time is no longer. The other conveys an idea of a city which has already descended, which is perfectly ridiculous, and none but the most abandoned and hardened of all liars, could possibly have so misrepresentod another’s statement.

And again says Mr. S., “where he requires all his true followers to go, under pain of his wrath.”

What wrath Mr. S? I know of no requirement in any of our books, which compels men to go there, or any where else, under pain of any wrath, except the troubles of a temporal nature, which shall befall the nations; and if God has provided the great west for a refuge from such wrath, it is no more than he has done for his saints in former ages. Think of Noah, Lot and many others, who received revelations directing them to a temporal refuge from the calamities which befell the wicked, and remember, it must be likewise in the days of the coming of man.—Read Math. 24c. 37, 38, 39v.

Again, Mr. S., says, “And it is a fundamental principle with them, that if they cannot buy the land, they are to obtain it by the sword;” judge, Mr. Sunderland, could you not see your own folly, first say God has sent down a city for the Mormons, even from heaven, and then say the Mormons are to take the land by the sword. O fool, when will you be any better. But again, Mr. S. why did you break off in the middle of the subject concerning the shedding of blood! Thus sir, you are likely to be an instrument, by your misrepresentations, lieing and deception, to cause our blood to flow, in fulfillment of this revelation. Had you quoted the whole subject, it would have forbidden us to shed blood, and foretold that our enemies would shed ours, which has been fulfilled; be the revelation true or false.

I will here insert the sentences in full as they occur in our Book of Covenants, that is, a sufficiency to convey the true sense of the sayings concerning the shedding of blood, and the purchase of the lands of Zion. I will also state, the circumstances under which those revelations were given.

The following are the sentences referred to:

“For, behold, verily I say unto you, the Lord willeth that the disciples, and the children of men, should open their hearts even to purchase this whole region of country, as soon as time will permit. Behold, here is wisdom; let them do this lest they receive none inheritance, save it be by the shedding of blood.

“And now, behold this is the will of the Lord your God concerning his saints, that they should assemble themselves together unto the land of Zion, not in haste, lest there should be confusion, which bringeth pestilence. Behold the land of Zion, I the Lord holdeth it in mine own hands, nevertheless, I the Lord rendereth unto Cæsar the things which are Cæsar’s, wherefore I the Lord willeth, that you should purchase the lands, that you may have advantage of the world, that you may have claims on the world, that they may not be stirred up unto anger, for Satan putteth it into their hearts to anger against you, and to the shedding of blood; wherefore the land of Zion shall not be obtained but by purchase or by blood, otherwise there is none inheritance for you—and if by purchase behold you are blessed, and if by blood, as you are forbidden to shed blood, lo, your enemies are upon you, and ye shall be scourged from city to city, and from synagogue to synagogue, and but few shall stand to receive an inheritance.”—Page 143, same date.

Here follows the commandment not to shed blood: “Thou shalt love thy neighbor as thyself. Thou shalt not steal. Neither commit adultery, nor kill, nor do anything like unto it. Thou shalt thank the Lord thy God in all things.”—Page 190.

Thou shalt offer a sacrifice unto the Lord thy God in righteousness: even that of a broken heart and a contrite spirit; and that thou mayest more fully keep thyself unspotted from the world, thou should go to the house of prayer and offer up thy sacraments upon my holy day, for verily this is a day appointed unto yob to rest from your labors, and to pay thy devotions unto the Most High; nevertheless thy vows shall be offered up in righteousness on all days and at all times, but remember that on this, the Lord’s day, thou shalt offer thine obligations and thy sacraments, unto the Most High, confessing thy sins unto thy brethren, and before the Lord; and on this day thou shalt do none other thing, only let thy food be prepared with singleness of heart, that thy fasting may be perfect, or in other words, that thy joy may be full.” p. 121.

“And now behold, I speak unto the church: Thou shalt not kill, and he that hills shall not have forgiveness in this world nor in the world to come.

Thus it is Mr. LeRoy Sunderland cannot unite with the Mormons until he repents for his lieing.