Traits of the Mosaic History 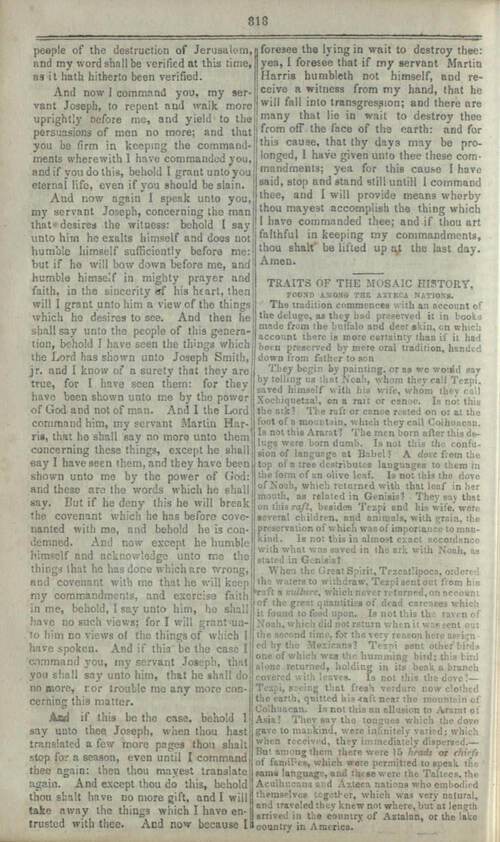 TRAITS OF THE MOSAIC HISTORY,

FOUND AMONG THE AZTECA NATIONS.

The tradition commences with an account of the deluge, as they had preserved it in books made from the buffalo and deer skin, on which account there is more certainty than if it had been preserved by mere oral tradition, handed down from father to son They begin by painting, or as we would say by telling us that Noah, whom they call Tezpi, saved himself with his wife, whom they call Xochiquetzal, on a raft or canoe.

Is not this the ark? The raft or canoe rested on or at the foot of a mountain, which they call Colhuacan. Is not this Ararat? The men born after this deluge were born dumb. Is not this the confusion of language at Babel? A dove from the top of a tree destributes languages to them in the form of an olive leaf. Is not this the dove of Noah, which returned with that leaf in her mouth, as related in Genisis? They say that on this raft, besides Tezpi and his wife, were several children, and animals, with grain, the preservation of which was of importance to mankind. Is not this in almost exact accordance with what was saved in the ark with Noah, as stated in Genisis?

When the Great Spirit, Tezcatlipoca, ordered the waters to withdraw, Tezpi sent out from his raft a vulture, which never returned, on account of the great quantities of dead carcases which it found to feed upon. Is not this the raven of Noah, which did not return when it was sent out the second time, for the very reason here assigned by the Mexicans? Tezpi sent other birds one of which was the humming bird; this bird alone returned, holding in its beak a branch covered with leaves. Is not this the dove? —Tezpi, seeing that fresh verdure now clothed the earth, quitted his raft near the mountain of Colhuacan. Is not this an allusion to Ararat of Asia? They say the tongues which the dove gave to mankind, were infinitely varied; which when received, they immediately dispersed. — But among them there were 15 heads or chiefs of families, which were permitted to speak the same language, and these were the Taltecs, the Aculhucans and Azteca nations who embodied themselves together, which was very natural, and traveled they knew not where, but at length arrived in the country of Aztalan, or the lake country in America.

The plate or engraving presented here is a surprising representation of the deluge of Noah; and of the confusion of the ancient language at the building of the tower of Babel, as related in the Book of Genisis. (see chap. vii and xi.

We have derived the subject of this plate from Baron Humbolt’s volume of Researches in Mexico, who found it painted on a manuscript book, made of the leaves of some kind of tree, suitable for the purpose, after the manner of the ancient nations of the sultry parts of Asia around the Mediterranean.

Among the vast multitude of painted representations found by this author on the books of the natives, made also frequently of prepared skins of animals, were delineated all the leading circumstances and history of the deluge, of the fall of man, and of the seduction of the woman by the means of the serpant, the first murder as perpetrated by Cain on the person of his brother Abel.

The plate, however, here presented shows no more than a picture of the flood, with Noah afloat on a raft, or as the traditions of some of the nations say on a tree, a canoe, and some say in a vessel of huge dimensions. Italso shows by the group of men approaching the bird, a somewhat obscure history of the confusion of the ancient language at the building of Babel, by representing them as being born dumb, who receive the gift of speech from a dove, which flutters in the branches of the tree, while she presents the languages to the mute throng, by bestowing upon each individual a leaf of the tree, which is shown in the form of small commas suspended from its beak.

Among the different nations, according to Humboldt, who inhabited Mexico, were found paintings which represented the deluge, or flood of Tezpi. * * * *

The painting of which the plate is the representation, shows Tezpi, or Noah, in the midst of the waters laying on his back. The mountain, the summit of which is crowned by a tree and rises above the waters is the peak of Colhucan, the Ararat of the Mexicans. At the foot of the mountain on each side appear the heads of Noah and his wife. The woman is known by the two points extending up from her forehead, which is the universal designation of the female sex among the Mexicans. The horn at the left hand of the tree with a human hand pointing to it, is the character representing a mountain and the head of a bird placed above the head of Tezpi or Noah, shows the vulture which the Mexicans say Tezpi sent out of his acalli or boat to see if the waters had subsided.

In the figure of the bird with the leaves of a tree in his beak, is shown the circumstance of the dove’s return to the ark, when it had been sent out the second time bringing a branch of the olive in its mouth; but in their tradition it had become misplaced, and is made the author of the languages. That birds have a language was believed by the nations of the old world. Some of those nations retain a surprising traditional account of the deluge; who say that Noah embarked in a spacious acalli or boat, with his wife, his children, several animals, and grain, the preservation of which was of great importance to mankind. When the Great Spirit, Tezcatlipoca, ordered the waters to withdraw, Tezpi or Noah sent out from his boat a vulture. But the bird’s natural food was that of dead carcases, it did not return on account of the great number of dead carcasses with which the earth now dried in some places abounded.

Tezpi sent out other birds one of which was the humming bird; this bird alone returned again to the boat, holding in his beak a branch covered with leaves. Tezpi now knowing that the earth was dry, being clothed with fresh verdure, quitted his bark near the mountain Colhucan or Ararat. A tradition of the same fact, the deluge, is also found among the Indians of the Northwest. I received, says a late traveller, the following account from a Chief of one of the tribes in his own words, in the English. “An old man live great while ago, he wery good man, he have three sons. The great spirit tell him go make a raft—build wigwam on top; for he make it rain wery much. — When this done, Great spirit say, put in two of all the creatures, then take sun moon — all the stars, put them in — get in himself with his Equa (wife) children, shut door, all dark outside. —

Then it rain much, hard many days. When they stay there long time — Great Spirit say, old man go out. So he take, diving animal, sao gy see if find the earth; so he went, come back, not find any thing. Then he wait few days — send out mushquash see what he find.

When he come back, brought some mud in he paw; old man wery glad; he tell mushquash he very good, long this world stand be plenty mushquash, no man ever kill you all. Then few days more he take wary pretty bird send him out see what it find; that bird no come back; so he sent out one white bird that come back, have grass in he mouth.

So old man know water going down. The Great Spirit say, old man, let sun, moon, stars go out, old man too. He go out, raft on much big mountain when he see pretty bird he sent out first, eating dead things — he say, bird you do no right, when me send you no come back, you must be black, you no pretty bird any more — you always eat bad things.

So it was black.”

And it came to pass that the brother of Jared did cry unto the Lord according to that which had been spoken by the mouth of Jared. And it came to pass that the Lord did hear the brother of Jared, and had compassion upon him and said unto him, go to and gather together thy flocks, both male and female of every kind; and also of the seed of the earth of every kind, and thy families; and also Jared thy brother and his family; and also thy friends and their families, and the friends of Jared and their families. And when thou hast done this, thou shalt go at the head of them down into the valley that is northward.

And there shall be none greater than the nation which I will raise up unto me of thy seed; upon all the face of the earth. And thus I will do unto thee because this long time ye have cried unto me.

Here, then, we have two records found upon this continent, that go to support the words of eternal truth —the Bible; and whilst these records, both of them, sanction the testimony of the scriptures in regard to the flood, the tower of Babel, and the confusion of languages; the tradition and hyeroglyphics of the Zaltees, the Colhuacans, and the Azteca nations, in regard to the confusion of languages and their travels to this land, is so like that contained in the Book of Mormon, that the striking analogy must be seen by every superficial observer.

In regard to the confusion of languages it is said of the above nations, that there were “fifteen heads, or chiefs of families, that were permitted to speak the same language.” The Book of Mormon, concerning the same event, says: “And it came to pass that the brother of Jared did cry unto the Lord; and the Lord had compassion on Jared, therefore he did not confound the language of Jared” —and it further states that Jared’s brother’s language was not confounded; and they then prayed for their families and friends also, and the Lord heard them in their behalf; and their language was not confounded. These accounts, then, precisely agree, one of which was found in Ontario county, N. Y., and the other in Mexico.

Again, those nations, or families, embodied themselves together and traveled they knew not where, but at length arrived in the country of Aztalan, or the lake country of America. The Book of Mormon says, that the brother of Jared cried unto the Lord, that he would give them another land; the Lord heard him, and told him to go to a certain place, “and there I will meet thee and go before thee into a land which is choice above all the land of the earth.” This it further speaks is the land of America. The coincidence is so striking that further comment is unnecessary. — ED.