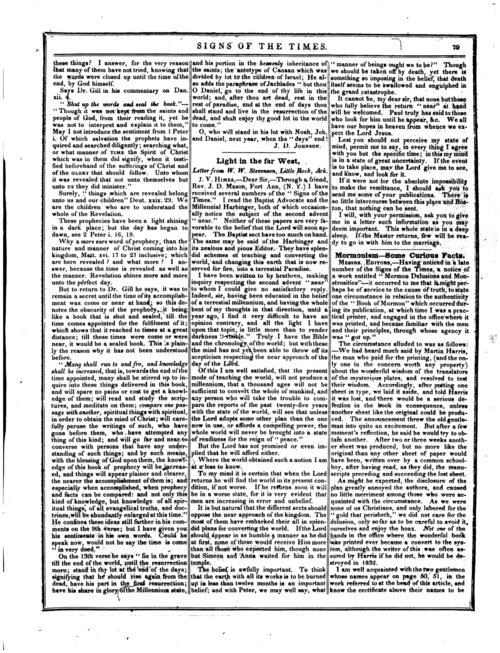 MESSRS. EDITORS,—Having noticed in a late number of the Signs of the Times, a notice of a work entitled “Mormon Delusions and Monstrosities”—it occurred to me that it might perhaps be of service to the cause of truth, to state one circumstance in relation to the authenticity of the “Book of Mormon” which occurred during its publication, at which time I was a practical printer, and engaged in the office where it was printed, and became familiar with the men and their principles, through whose agency it was “got up.”

The circumstance alluded to was as follows:—We had heard much said by Martin Harris, the man who paid for the printing, (and the only one in the concern worth any property) about the wonderful wisdom of the translators of the mysterious plates, and resolved to test their wisdom. Accordingly, after putting one sheet in type, we laid it aside, and told Harris it was lost, and there would be a serious defection in the book in consequence, unless another sheet like the original could be produced. The announcement threw the old gentleman into quite an excitement. But after a few moment’s reflection, he said he would try to obtain another. After two or three weeks another sheet was produced, but no more like the original than any other sheet of paper would have been, written over by a common schoolboy, after having read, as they did, the manuscripts preceding and succeeding the lost sheet.

As might be expected, the disclosure of the plan greatly annoyed the authors, and caused no little merriment among those who were acquainted with the circumstance. As we were none of us Christians, and only labored for the “gold that perisheth,” we did not care for the delusion, only so far as to be careful to avoid it, ourselves and enjoy the hoax.

Not one of the hands in the office where the wonderful book was printed ever became a convert to the system, although the writer of this was often assured by Harris if he did not, he would be destroyed in 1832.

I am well acquainted with the two gentlemen whose names appear on page 50, 51, in the work referred to at the head of this article, and know the certificate above their name to be [79] true. I have known several instances of the grossest impostures by them in their pretensions of working miracles, &c. &c., and am greatly surprised that such a man as Nickerson of your city, can induce any rational person to follow in his pernicious ways.

Mrs. Harris, the wife of Martin Harris, was so familiar with the monstrous wickedness and folly of her husband, and the trio who were engaged with him, that she would not follow him nor live with him. His conduct was not such as a man of God would have been. After he had been absent about two years, and frequent reports of his having power to heal the sick, &c. had reached his neighborhood, he returned and assured his wife that he could cure her of deafness with which she was afflicted. But as a condition of so doing, he required her to put into his hands about $1,500 of money which she had managed to secure out of the avails of his property, which he sold on joining the “latter day saints” colony. She assured him he should have every dollar as soon as her hearing was restored. But he very wisely replied, he could “have no evidence of her faith until she put the cash down”—so of course she remained deaf, and Martin went back to the “promised land” with pockets as light as when he came.

This is no doubt one of the great deceptions which should come upon the people on the eve of the second coming of the Son of Man. Let the saints of God beware of them. Let no persecution or violence be opposed to them, but simply an avoidance, and we shall soon find them without faith.

Yours in the gospel of Christ,