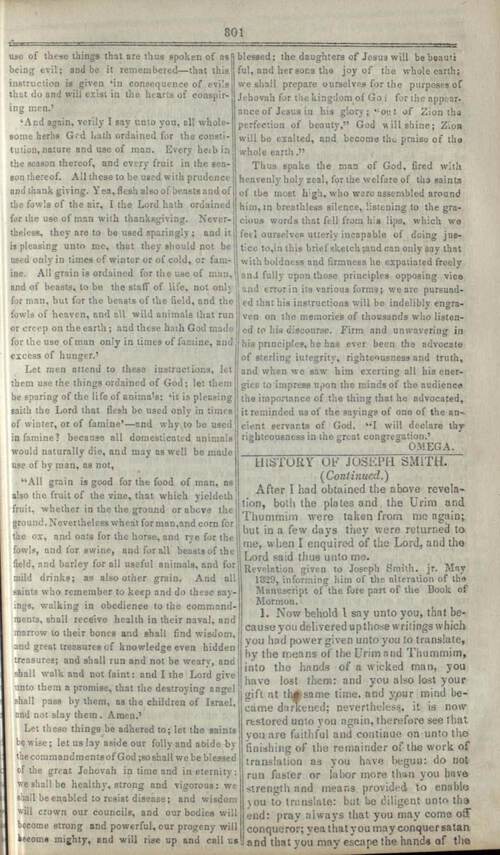 After I had obtained the above revelation, both the plates and the Urim and Thummim were taken from me again; but in a few days they were returned to me, when I enquired of the Lord, and the Lord said thus unto me.

Revelation given to Joseph Smith. jr. May 1829, informing him of the alteration of the Manuscript of the fore part of the Book of Mormon.

1. Now behold I say unto you, that because you delivered up those writings which you had power given unto you to translate, by the means of the Urim and Thummim, into the hands of a wicked man, you have lost them: and you also lost your gift at the same time, and your mind became darkened; nevertheless, it is now restored unto you again, therefore see that you are faithful and continue on unto the finishing of the remainder of the work of translation as you have begun: do not run faster or labor more than you have strength and means provided to enable you to translate: but be diligent unto the end: pray always that you may come off conqueror; yea that you may conquer satan and that you may escape the hands of the [801] servants of satan, that do uphold his work. Behold they have sought to destroy you; yea, even the man in whom you have trusted, has sought to destroy you. And for this cause I said that he is a wicked man, for he has sought to take away the things wherewith you have been entrusted; and he has also sought to destroy your gift, and because you have delivered the writings into his hands, behold wicked men have taken them from you; therefore you have delivered them up, yea, that which was sacred unto wickedness. And behold satan has put it into their hearts to alter the words which you have caused to be written, or which you have translated, which have gone out of your hands; and behold I say unto you, that because they have altered the words, they read contrary from that which you translated and caused to be written, and on this wise the devil has sought to lay a cunning plan, that he may destroy this work; for he has put it into their hearts to do this, that by lying they may say they have caught you in the words which you have pretended to translate.

2. Verily I say unto you, that I will not suffer that satan shall accomplish his evil design in this thing, for behold he has put it into their hearts to get thee to tempt the Lord thy God, in asking to translate it over again: and then behold they say and think in their hearts, we will see if God has given him power to translate, if so he will also give him power again: and if God giveth him power again, or if he translate again, or in other words, if he bringeth forth the same words, behold we have the same with us and we have altered them; therefore they will not agree, and we will say that he has lied in his words, and that he has no gift, and that he has no power: therefore, we will destroy him; and also the work, and we will do this that we may not be ashamed in the end, and that we may get glory of the world.

3. Verily, verily I say unto you, that satan has great hold upon their hearts; he stirreth them up to iniquity against that which is good, and their hearts are corrupt, and full of wickedness and abominations, and they love darkness rather than light, because their deeds are evil: therefore they will not ask of me. Satan stirreth them up, that he may lead their souls to destruction. And thus he has laid a cunning plan, thinking to destroy the work of God, but I will require this at their hands, and it shall turn to their shame and condemnation in the day of judgment, yea, he stirreth up their hearts to anger against this work; yea, he saith unto them deceive, and lie in wait to catch, that ye may destroy: behold this is no harm, and thus he flattereth them and telleth them that it is no sin to lie, that they may catch a man in a lie, that they may destroy him, and thus he flattereth them, and leading them along until he draggeth their souls down to hell; and thus he causeth them to catch themselves in their own snare; and thus he goeth up and down, to and fro in the earth, seeking to destroy the souls of men.

4. Verily, verily I say unto you, wo be unto him that lieth to deceive, because he supposeth that another lieth to deceive for such are not exempt from the justice of God.

5. Now, behold they altered those words, because satan saith unto them: He hath deceived you: and thus he flattereth them away to do iniquity, to get thee to tempt the Lord thy God.

6. Behold I say unto you that you shall not translate again those words which have gone forth out of your hands; for behold they shall not accomplish their evil designs in lying against those words. For, behold, if you should bring forth the same words they will say that you have lied; that you have pretended to translate, but that you have contradicted yourself: and behold they will publish this, and satan will harden the hearts of the people to stir them up to anger against you, that they will not believe my words. Thus satan thinketh to overpower your testimony in this generation, that the work may not come forth in this generation: but behold here is wisdom, and because I shew unto you wisdom, and give you commandments concerning these things, what you shall do, shew it not unto the world until you have accomplished the work of translation.

9. And now, because the account which is engraven upon the plates of Nephi, is more particular concerning the things, which in my wisdom I would bring to the knowledge of the people in this account; therefore, you shall translate the engravings which are on the plates of Nephi, down even till you come to the reign of king Benjamin, or until you come to that which you have translated, which you have retained; and behold, you shall publish it as the record of Nephi, and thus I will confound those who have altered my words. I will not suffer that they shall destroy my work; yea, I will show unto them that my wisdom is greater than the cunning of the devil.

10. Behold they have only got a part, or an abridgment of the account of Nephi. Behold there are many things engraven on the plates of Nephi, which do throw greater views upon my gospel; therefore, it is wisdom in me, that you should translate this first part of the engravings of Nephi, and send forth in this work. And behold, all the remainder of this work does contain all those parts of my gospel which my holy prophets. yea, and also my disciples desired in their prayers, should come forth unto this people. And I said unto them that it should be granted unto them according to their faith in their prayers; yea and this was their faith, that my gospel which I gave unto them, that they might preach in their days, might come unto their brethren, the Lamanites, and also, all that had become Lamanites, because of their dissentions.

11. Now this is not all, their faith in their prayers were, that this gospel should be made known also, if it were possible that other nations should possess this land: and thus they did leave a blessing upon this land in their prayers, that whosoever should believe in this gospel in this land might have eternal life, yea, that it might be free unto all of whatsoever nation, kindred, tongue or people, they may be.

12. And now, behold according to their faith in their prayers, will I bring this part of my gospel to the knowledge of my people. Behold, I do not bring it to destroy that which they have received, but to build it up.

13. And for this cause have I said, if this generation harden not their hearts, I will establish my church among them. Now I do not say this to destroy my church; but I say this to build up my church: therefore, whosoever belongeth to my church need not fear, for such shall inherit the kingdom of heaven, but it is they who do not fear me, neither keep my commandments, but buildeth up churches unto themselves, to get gain, yea, and all those that do wickedly, and buildeth up the kingdom of the devil; yea, verily, verily I say unto you that it is they that I will disturb, and cause to tremble and shake to the centre.

14. Behold, I am Jesus Christ, the Son of God, I came unto my own, and my own received me not. I am the light which shineth in darkness, and the darkness comprehendeth it not. I am he who said other sheep have I which are not of this fold, unto my disciples, and many there were that understood me not.

15. And I will show unto this people, that I had other sheep, and that they were a branch of the house of Jacob: and I will bring to light their marvellous works, which they did in my name: yea, and I will also bring to light my gospel, which was ministered unto them, and behold they shall not deny that which you have received, but they shall build it up, and shall bring to light the true points of my doctrine, yea, and the only doctrine which is in me; and this I do that I may establish my gospel, that there may not be so much contention: yea, satan doth stir up the hearts of the people to contention, concerning the points of my doctrine: and in these things they do err, for they do wrest the scriptures, and do not understand them: therefore, I will unfold unto them this great mystery, for behold I will gather them as a hen gathereth her chickens under her wings, if they will not harden their hearts: yea, if [803] they will come, they may, and partake of the waters of life freely.

17. And now, behold, whosoever is of my church, and endureth of my church to the end, him will I establish upon my Rock, and the gates of hell shall not prevail against them.

18. And now, remember the words of him who is the life and the light of the world, your Redeemer, your Lord, and your God. Amen. [804]