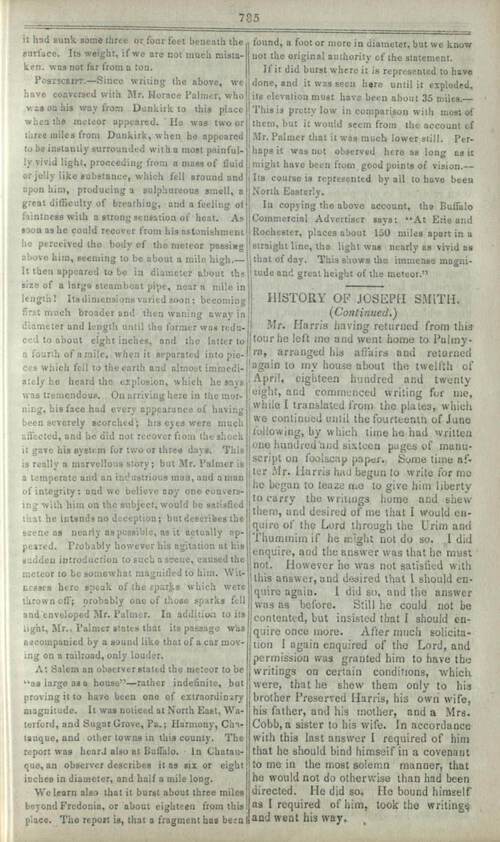 Mr. Harris having returned from this tour he left me and went home to Palmyra, arranged his affairs and returned again to my house about the twelfth of April, eighteen hundred and twenty eight, and commenced writing for me, while I translated from the plates, which we continued until the fourteenth of June following, by which time he had written one hundred and sixteen pages of manuscript on foolscap paper. Some time after Mr. Harris had begun to write for me he began to teaze me to give him liberty to carry the writings home and shew them, and desired of me that I would enquire of the Lord through the Urim and Thummim if he might not do so. I did enquire, and the answer was that he must not. However he was not satisfied with this answer, and desired that I should enquire again. I did so, and the answer was as before. Still he could not be contented, but insisted that I should enquire once more. After much solicitation I again enquired of the Lord, and permission was granted him to have the writings on certain conditions, which were, that he shew them only to his brother Preserved Harris, his own wife, his father, and his mother, and a Mrs. Cobb, a sister to his wife. In accordance with this last answer I required of him that he should bind himself in a covenant to me in the most solemn manner, that he would not do otherwise than had been directed. He did so. He bound himself as I required of him, took the writings and went his way. [785]

Notwithstanding however the great restrictions which he had been laid under, and the solemnity of the covenant which he had made with me, he did shew them to others, and by stratagem they got them away from him, and they never have been recovered nor obtained back again unto this day.

In the mean time while Martin Harris was gone with the writings, I went to visit my father’s family, at Manchester. I continued there for a short season and then returned to my place in Pennsylvania. Immediately after my return home I was walking out a little distance when behold the former heavenly messenger appeared and handed to me the Urim and Thummim again, (for it had been taken from me in consequence of my having wearied the Lord in asking for the privilege of letting Martin Harris take the writings which he lost by transgression,) and I enquired of the Lord through them and obtained the following revelation:

Revelation to Joseph Smith, Jr. given July, 1828, concerning certain manuscripts on the first part of the book of Mormon, which had been taken from the possession of Martin Harris.

1. The works, and the designs, and the purposes of God, cannot be frustrated, neither can they come to nought, for God doth not walk in crooked paths; neither doth he turn to the right hand nor to the left; neither doth he vary from that which he hath said; therefore his paths are strait and his course is one eternal round.

2. Remember, remember, that it is not the work of God that is frustrated, but the work of men: for although a man may have many revelations, and have power to do many mighty works, yet, if he boasts in his own strength, and sets at nought the counsels of God, and follows after the dictates of his own will, and carnal desires, he must fall and incur the vengeance of a just God upon him.

3. Behold, you have been intrusted with these things, but how strict were your commandments; and remember, also, the promises which were made to you, if you did not transgress them; and behold, how oft you have transgressed the commandments and the laws of God, and have gone on in the persuasions of men; for behold, you should not have feared man more than God, although men set at nought the counsels of God, and despise his words, yet you should have been faithful and he would have extended his arm, and supported you against all the fiery darts of the adversary; and he would have been with you in every time of trouble.

4. Behold thou art Joseph, and thou wast chosen to do the work of the Lord, but because of transgression, if thou art not aware thou wilt fall, but remember God is merciful: therefore repent of that which thou hast done, which is contrary to the commandment which I gave you, and thou art still chosen, and art again called to the work; except thou do this, thou shalt be delivered up and become as other men, and have no more gift.

5. And when thou deliveredst up that which God had given thee sight and power to translate, thou deliveredst up that which was sacred, into the hands of a wicked man, who has set at nought the counsels of God, and has broken the most sacred promises, which were made before God, and has depended upon his own judgment, and boasted in his own wisdom, and this is the reason that thou hast lost thy privileges for a season, for thou hast suffered the counsel of thy director to be trampled upon from the beginning.

6. Nevertheless my work shall go forth, for, inasmuch as the knowledge of a Saviour has come unto the world, through the testimony of the Jews, even so shall the knowledge of a Saviour come unto my people; and to the Nephites, and the Jacobites, and the Josephites, and the Zoramites, through the testimony of their fathers; and this testimony shall come to the knowledge of the Lamanites, and the Lemuelites, and the Ishmaelites, who dwindled in unbelief because of the iniquity of their fathers, whom the Lord has suffered to destroy their brethren the Nephites, because of their iniquities and their abominations; and for this very purpose are these plates preserved which contain these records, that the promises of the Lord might be fulfilled, which he made to his people; and that the Lamanites might come to the kdowledge of their fathers, and that they might know the promises of the Lord, and that they may believe the gospel and rely upon the merits of Jesus Christ, and be glorified though faith in his name; and that through their repentance they might be saved: Amen. [786]