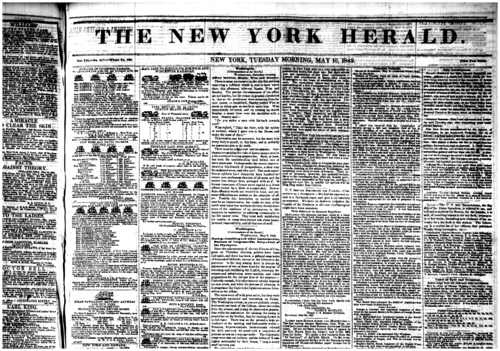 MORMONISM AND MESMERISM.—Among the distinguished arrivals in this city last week, we have that of the celebrated Mons. L. de Bonneville, formerly Professor of French in Harvard College, since then Professor of Magnetism all over the country, and now and forever a great teacher and preacher, and a burning and shining light among the Mormons.

This gentleman is an extraordinary man—a perfect enthusiast in his science of Mesmerism—he has followed it up with such intensity as to discover that Mormonism is the only true religion after all, according to his notions; and that by means of Mesmerism he has discovered the true Mormon mode of revelation, and the way in which Joe Smith receives his communications direct from Heaven. He teaches French, Spanish, Italian, Latin, the arts and sciences, and probably the unknown tongues, and is able to cure sick people of all sorts of disorders, including the blue devils—in short, every disease, but that of empty pockets. His love for the Mormons was so great, and his conviction derived from Mesmerism so certain, that they were and are the true people of God—that he abandoned a lucrative situation at Harvard, to go out into the world, and preach the truth. To be sure, he fell into the hands of the Philistines, and was robbed by a brother in part of his faith, of all his money; but that’s a trifle. He is here now, and we advise him to give lectures instantly, on the extraordinary connection between Mormonism and Mesmerism, to the salvation of sinners. We want a great reform here bad enough.