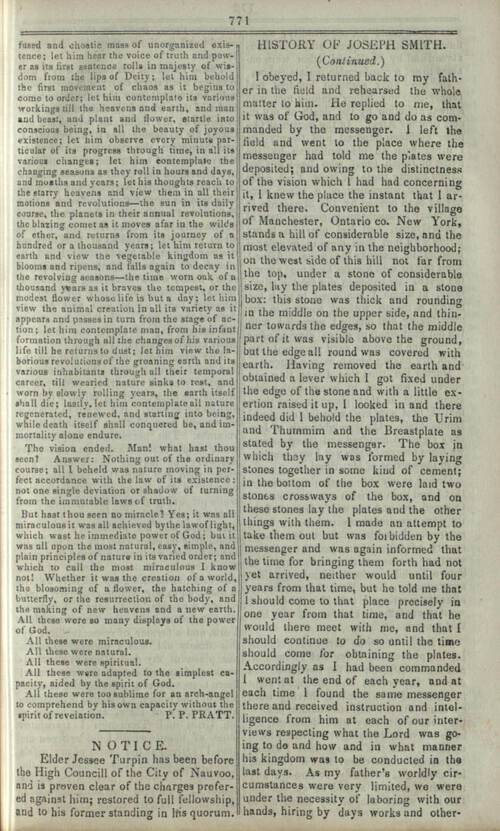 I obeyed, I returned back to my father in the field and rehearsed the whole matter to him.

He replied to me, that it was of God, and to go and do as commanded by the messenger. I left the field and went to the place where the messenger had told me the plates were deposited; and owing to the distinctness of the vision which I had had concerning it, I knew the place the instant that I arrived there. Convenient to the village of Manchester, Ontario co. New York, stands a hill of considerable size, and the most elevated of any in the neighborhood; on the west side of this hill not far from the top, under a stone of considerable size, lay the plates deposited in a stone box: this stone was thick and rounding in the middle on the upper side, and thinner towards the edges, so that the middle part of it was visible above the ground, but the edge all round was covered with earth. Having removed the earth and obtained a lever which I got fixed under the edge of the stone and with a little exertion raised it up, I looked in and there indeed did I behold that plates, the Urim and Thummim and the Breastplate as stated by the messenger. The box in which they lay was formed by laying stones together in some kind of cement; in the bottom of the box were laid two stones crossways of the box, and on these stones lay the plates and the other things with them. I made an attempt to take them out but was forbidden by the messenger and was again informed that the time for bringing them forth had not yet arrived, neither would until four years from the time, but he told me I should come to that place precisely in one year from that time, and that he would there meet with me, and that I should continue to do so until the time should come for obtaining the plates. Accordingly as I had been commanded I went at the end of each year, and at each time I found the same messenger there and received instruction and intelligence from him at each of our interviews respecting what the Lord was going to do and how and in what manner his kingdom was to be conducted in the last days. As my father’s worldly circumstances were very limited, we were under the necessity of laboring with our hands, hiring by days works and other- [771] wise as we could get opportunity, sometimes we were at home and sometimes abroad and by continued labor were enabled to get a comfortable maintainance.

In the year eighteen hundred and twenty-four my father’s family met with a great affliction by the death of my eldest brother Alvin. In the month of October eighteen hundred and twenty-five I hired with an old gentleman, by the name of Josiah Stoal who lived in Chenango county State of New York. He had heard something of a silver mine having been opened by the Spaniards in Harmony Susquehannah county State of Pennsylvania, and had previous to my hiring with him been digging in order if possible to discover the mine. After I went to live with him he took me among the rest of his hands to dig for the silver mine, at which I continued to work for nearly a month without success in our undertaking, and finally I prevailed with the old gentleman to cease digging after it. Hence arose the very prevalent story of my having been a money digger.

During the time that I was thus employed I was put to board with a Mr. Isaac Hale of that place; it was there that I first saw my wife (his daughter) Emma Hale. On the eighteenth of January eighteen hundred and twenty-seven we were married while yet I was employed in the service of Mr. Stoal.

Owing to my still continuing to assert that I had seen a vision persecution still followed me, and my wife’s father’s family were very much opposed to our being married. I was therefore under the necessity of taking her elsewhere so we went and were married at the house of Squire Tarbill, in South Bainbridge Chenango county, New York. Immediately after my marriage I left Mr. Stoal’s and went to my father’s and farmed with him that season.

At length the time arrived for obtaining the plates, the Urim and Thummim, and the breastplate; on the twenty-second day of September, one thousand eight hundred and twenty-seven, having went as usual at the end of another year to the place where they were deposited, the same heavenly messenger delivered them up to me, with this charge that I should be responsible for them: that if I should let them go carelessly or through any neglect of mine I should be cut off; but that if I would use all my endeavors to preserve them, until he the messenger should call for them, they should be protected.

I soon found out the reason why I received such strict charges to keep them safe, and why it was that the messenger had said that when I had done what was required at my hand, he would call for them; for no sooner was it known that I had them than the most strenuous exertions were used to get them from me; every stratagem that could be invented was resorted to for that purpose; the persecution became more bitter and severe than before, and multitudes were on the alert continually to get them from me if possible; but by the wisdom of God they remained safe in my hands until I had accomplished by them what was required at my hand, when according to arrangements the messenger called for them, I delivered them up to him and he has them in his charge until this day, being the second day of May, one thousand eight hundred and thirty-eight.

The excitement however still continued, and rumor with her thousand tongues was all the time employed in circulating tales about my father’s family, and about myself. If I were to relate a thousandth part of them it would fill up volumes. The persecution however became so intolerable that I was under the necessity of leaving Manchester, and going with my wife to Susquehannah county in the State of Pennsylvania: while preparing to start (being very poor and the persecution so heavy upon us that there was no probability that we would ever be otherwise,) in the midst of our afflictions we found a friend in a gentleman by the name of Martin Harris, who came to us and gave me fifty dollars to assist us in our afflictions. Mr. Harris was a resident of Palmyra Township Wayne county, in the State of New York, and a farmer of respectability; by this timely aid was I enabled to reach the place of my destination in Pennsylvania, and immediately after my arrival there I commenced copying the characters of the plates. I copied a considerable number of them, and by means of the Urim and Thummim I translated some of them, which I did between the time I arrived at the house of my wife’s father in the month of December, and the February following. Some time in this month of February the aforementioned, Mr. Martin Harris came to our place, [772] got the characters which I had drawn off the plates and started with them to the city of New York. For what took place relative to him and the characters, I refer to his own account of the circumstances as he related them to me after his return which was as follows. “I went to the city of New York and presented the characters which had been translated, with the translation thereof to Professor Anthony, a gentleman celebrated for his literary attainments;—Professor Anthony stated that the translation was correct, more so than any he had before seen translated from the Egyptian. I then showed him those which were not yet translated, and he said that they were Egyptian, Chaldeac, Assyriac, and Arabac, and he said that they were the true characters. He gave me a certificate certifying to the people of Palmyra that they were true characters, and that the translation of such of them as had been translated was also correct. I took the certificate and put it into my pocket, and was just leaving the house, when Mr. Anthony called me back, and asked me how the young man found out that there were gold plates in the place where he found them. I answered that an angel of God had revealed it un to him.

He then said to me, let me see that certificate, I accordingly took it out of my pocket and gave it to him, when he took it and tore it to pieces, saying that there was no such thing now as ministering of angels, and that if I would bring the plates to him, he would translate them. I informed him that part of the plates were sealed, and that I was forbidden to bring them, he replied ‘I cannot read a sealed book.’ I left him and went to Dr. Mitchel who sanctioned what Professor Anthony had said respecting both the characters and the translation.”