A Catacomb of Mummies Found in Kentucky 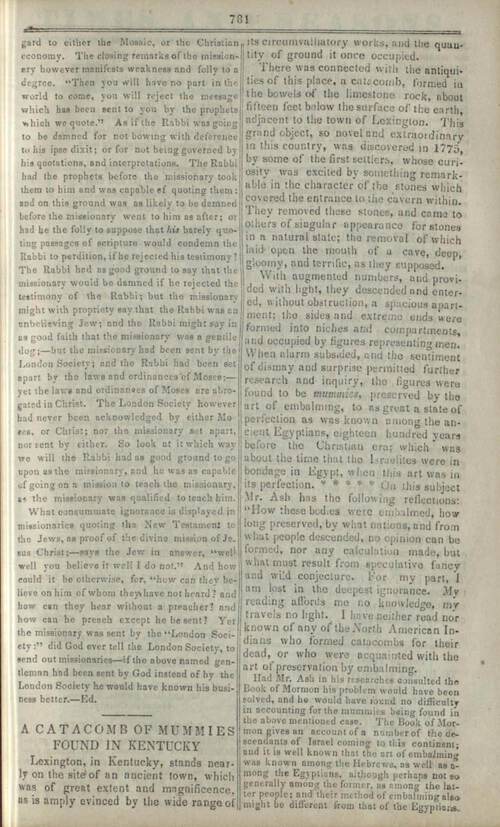 A CATACOMB OF MUMMIES FOUND IN KENTUCKY

Lexington, in Kentucky, stands nearly on the site of an ancient town, which was of great extent and magnificence, as is amply evinced by the wide range of its circumvalliatory works, and the quantity of ground it once occupied.

There was connected with the antiquities of this place, a catacomb, formed in the bowels of the limestone rock, about fifteen feet below the surface of the earth, adjacent to the town of Lexington. This grand object, so novel and extraordinary in this country, was discovered in 1775, by some of the first settlers, whose curiosity was excited by something remarkable in the character of the stones which covered the entrance to the cavern within. They removed these stones, and came to others of singular appearance for stones in a natural state; the removal of which laid open the mouth of a cave, deep, gloomy, and terrific, as they supposed.

With augmented numbers, and provided with light, they descended and entered, without obstruction, a spacious apartment; the sides and extreme ends were formed into niches and compartments, and occupied by figures representing men. When alarm subsided, and the sentiment of dismay and surprise permitted further research and inquiry, the figures were found to be mummies, preserved by the art of embalming, to as great a state of perfection as was known among the ancient Egyptians, eighteen hundred years before the Christian era; which was about the time that the Israelites were in bondage in Egypt, when this art was in its perfection. * * * * * On this subject Mr. Ash has the following reflections: “How these bodies were embalmed, how long preserved, by what nations, and from what people descended, no opinion can be formed, nor any calculation made, but what must result from speculative fancy and wild conjecture. For my part, I am lost in the deepest ignorance. My reading affords me no knowledge, my travels no light. I have neither read nor known of any of the North American Indians who formed catacombs for their dead, or who were acquainted with the art of preservation by embalming.

Had Mr. Ash in his researches consulted the Book of Mormon his problem would have been solved, and he would have found no difficulty in accounting for the mummies being found in the above mentioned case. The Book of Mormon gives an account of a number of the descendants of Israel coming to this continent; and it is well known that the art of embalming was known among the Hebrews, as well as among the Egyptians, although perhaps not so generally among the former, as among the latter people; and their method of embalming also might be different from that of the Egyptians. [781] Jacob and Joseph were no doubt, embalmed in the manner of the Egyptians, as they died in that country, Gen. 1, 2, 3, 26. When our Saviour was crucified his hasty burial obliged them only to wrap his body in linnen with a hundred pounds of myrrh, aloes, ahd similar spices, (part of the ingredients of embalming.) given by Nicodemus for that purpose: but Mary and other holy women had prepared ointment and spices for embalming it, Matt. xxviii. 59: Luke xxiii. 56: John xxx. 39, 40.

This art was no doubt transmitted from Jerusalem to this continent, by the before mentioned emigrants, which accounts for the finding of the mummies, and at the same time is another strong evidence of the authenticity of the Book of Mormon.—[ED.