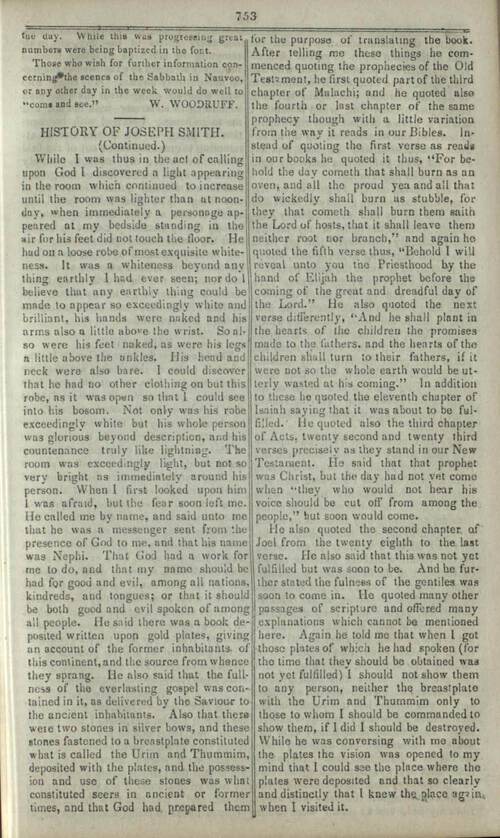 While I was thus in the act of calling upon God I discovered a light appearing in the room which continued to increase until the room was lighter than at noonday, when immediately a personage appeared at my bedside standing in the air for his feet did not touch the floor. He had on a loose robe of most exquisite whiteness. It was a whiteness beyond any thing earthly I had ever seen; nor do I believe that any earthly thing could be made to appear so exceedingly white and brilliant, his hands were naked and his arms also a little above the wrist. So also were his feet naked, as were his legs a little above the ankles. His head and neck were also bare. I could discover that he had no other clothing on but this robe, as it was open so that I could see into his bosom. Not only was his robe exceedingly white but his whole person was glorious beyond description, and his countenance truly like lightning. The room was exceedingly light, but not so very bright as immediately around his person. When I first looked upon him I was afraid, but the fear soon left me. He called me by name, and said unto me that he was a messenger sent from the presence of God to me, and that his name was Nephi. That God had a work for me to do, and that my name should be had for good and evil, among all nations, kindreds, and tongues; or that it should be both good and evil spoken of among all people. He said there was a book deposited written upon gold plates, giving an account of the former inhabitants of this continent, and the source from whence they sprang. He also said that the fullness of the everlasting gospel was contained in it, as delivered by the Saviour to the ancient inhabitants. Also that there were two stones in silver bows, and these stones fastened to a breastplate constituted what is called the Urim and Thummim, deposited with the plates, and the possession and use of these stones was what constituted seers in ancient or former times, and that God had prepared them for the purpose of translating the book. After telling me these things he commenced quoting the prophecies of the Old Testament, he first quoted part of the third chapter of Malachi; and he quoted also the fourth or last chapter of the same prophecy though with a little variation from the way it reads in our Bibles. Instead of quoting the first verse as reads in our books he quoted it thus, “For behold the day cometh that shall burn as an oven, and all the proud yea and all that do wickedly shall burn as stubble, for they that cometh shall burn them saith the Lord of hosts, that it shall leave them neither root nor branch,” and again he quoted the fifth verse thus, “Behold I will reveal unto you the Priesthood by the hand of Elijah the prophet before the coming of the great and dreadful day of the Lord.” He also quoted the next verse differently, “And he shall plant in the hearts of the children the promises made to the fathers, and the hearts of the children shall turn to their fathers, if it were not so the whole earth would be utterly wasted at his coming.” In addition to these he quoted the eleventh chapter of Isaiah saying that it was about to be fulfilled. He quoted also the third chapter of Acts, twenty second and twenty third verses precisely as they stand in our New Testament. He said that that prophet was Christ, but the day had not yet come when “they who would not hear his voice should be cut off from among the people,” but soon would come.

He also quoted the second chapter of Joel from the twenty eighth to the last verse. He also said that this was not yet fulfilled but was soon to be. And he further stated the fulness of the gentiles was soon to come in. He quoted many other passages of scripture and offered many explanations which cannot be mentioned here. Again he told me that when I got those plates of which he had spoken (for the time that they should be obtained was not yet fulfilled) I should not show them to any person, neither the breastplate with the Urim and Thummim only to those to whom I should be commanded to show them, if I did I should be destroyed. While he was conversing with me about the plates the vision was opened to my mind that I could see the place where the plates were deposited and that so clearly and distinctly that I knew the place again, when I visited it. [753]

After this communication I saw the light in the room begin to gather immediately around the person of him who had been speaking to me, and it continued to do so until the room was again left dark except just around him, when instantly I saw as it were a conduit open right up into heaven, and he ascended up till he entirely disappeared and the room was left as it had been before this heavenly light had made its appearance.

I lay musing on the singularity of the scene and marvelling greatly at what had been told me by this extraordinary messenger, when in the midst of my meditation I suddenly discovered that my room was again beginning to get lighted, and in an instant, as it were, the same heavenly messenger was again by my bed side. He commenced and again related the very same things which he had done at his first visit without the least variation, which having done, he informed me of great judgments which were coming upon the earth, with great desolations by famine, sword, and pestilence, and that these grievous judgments would come on the earth in this generation. Having related these things he again ascended as he had done before.

By this time so deep were the impressions made on my mind that sleep had fled from my eyes and I lay overwhelmed in astonishment at what I had both seen and heard; but what was my surprise when again I beheld the same messenger at my bedside, and heard him rehearse or repeat over again to me the same things as before and added a caution to me, telling me that Satan would try to tempt me (in consequence of the indigent circumstances of my father’s family) to get the plates for the purpose of getting rich. This he forbid me, saying that I must have no other object in view in getting the plates but to glorify God, and must not be influenced by any other motive but that of building his kingdom, otherwise I could not get them. After this third visit he again ascended up into heaven as before and I was again left to ponder on the strangeness of what I had just experienced, when almost immediately after the heavenly messenger had ascended from me the third time, the cock crew, and I found that day was approaching so that our interviews must have occupied the whole of that night. I shortly after arose from my bed, and as usual went to the necessary labors of the day, but in attempting to labor as at other times, I found my strength so exhausted as rendered me entirely unable. My father who was laboring along with me discovered something to be wrong with me and told me to go home. I started with the intention of going to the house, but in attempting to cross the fence out of the field where we were, my strength entirely failed me and I fell helpless on the ground and for a time was quite unconscious of any thing. The first thing that I can recollect was a voice speaking unto me calling me by name. I looked up and beheld the same messenger standing over my head surrounded by light as before. He then again related unto me all that he had related to me the previous night, and commanded me to go to my father and tell him of the vision and commandments which I had received.