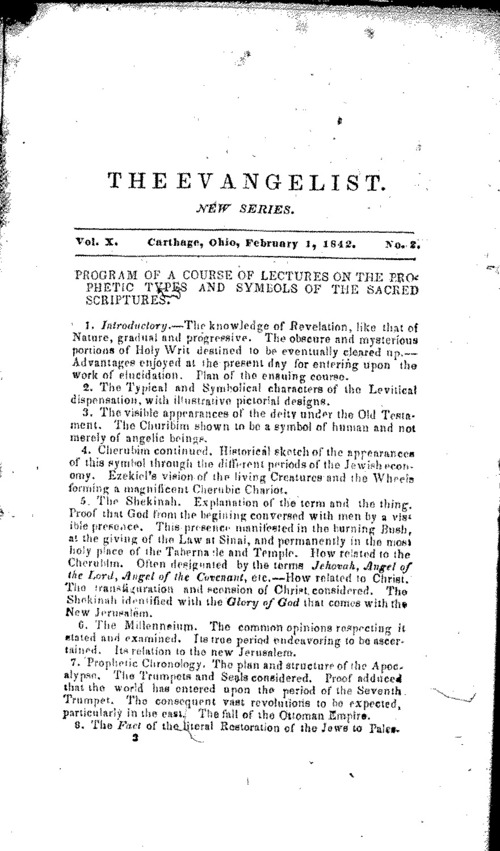 I have taken a moment of time to write you. Some two weeks ago our dull monotony was broken in upon by an announcement in our city papers that a Mormon was to preach in the Bethel meetinghouse, and afterwards in the room known as Irvin’s Long-room. Curiosity was upon tiptoe, and every body must needs hear him; I among the rest. He professed to be an apostle called of God, and the Book of Mormon, to be divine. To prove the divinity of the book he assured us that a prophecy, and the description of certain cities in South America were accurately laid down, and that recent discoveries made by Stevens and Catherwood in 1840 confirmed the sayings of the book and together with other discoveries made in Guatemala and elsewhere, were internal evidences of the book to prove beyond doubt its authenticity, and he defied a successful confutation at the hands of any man. [32]

Our Clergy would not engage him: saying “if we let him alone his base pretensions will discover themselves to the minds of many individuals, who themselves began to contend that if the doctrine &c. were false it ought to be refuted, but they did not believe any man could meet this valiant apostle. Endeavours were now made to bring about a contest, without success, until after repeated challenges to discuss the authenticity of the Book of Mormon, had been made by the Mormon, our bro. Church accepted the challenge. The Mormon, whose name is John E. Page, would not meet him unless brother Church, would discuss the Abrahamic covenant, the literal gathering of the Jews, and determine what had become of the house of Joseph first. Brother Church held to the challenge as accepted, and gave him notice that in the mean time he would publicly examine his credentials (if he could find any) to his apostleship.

On the night set apart bro. C. shewed by the scriptures, the testimonies God ever gave to his messengers, and ministers specially sent, and rendered it necessary for Mr. Page to produce that authority he claimed, but for which bro. Church had in vain sought.

Mr. Page promised to meet Bro. Church, on this point in our meetinghouse, and expose the deceitful way in which bro. C. handled the word of truth, and if he had any feeling to bring the blush to his cheek. The evening came, (Thursday 13th inst.) and about 500 persons were compactly stowed into our small meetinghouse. Brother Church arose, and in the presence of all, and in an audible voice gave Mr. P. a Charte blanche, and told him not to spare the rod, for when it came to his time he would lay on hard.

Mr. Page proceeded to show that the miracles wrought by the prophets were not to produce faith, but to bring destruction, and that it was out of the power of our dear Master to work many miracles in his own country because of their unbelief, that miracles were wrought among the Mormon believers, to the healing of leprosy &c. In quoting the passage relating to our Lord, he said “He could not do many miracles because of their unbelief;” and finally said we were like the Pharisees and Herod of old who tempted the Lord for a sign, and that they, no doubt like us, thought that it was from inability that the sign was not given.

Brother Church began about 9 o’clock by requesting the assent of the people to reply, which being given, he proceeded to shew how differently the Bible and Mr. Page spoke of the purposes for which miracles were wrought: (Mr. P. here denied that he stated they were for destruction but was set right by the audience). He shewed that the Mormons and our newspapers [33] would have given ample proof if any leprosy had been cured, or miracle of any kind wrought, and set him straight as to his various tortured quotations, and finally stripped every feather from his crest, by making him to say whether he would, as he had often proposed discuss the authenticity of the Book of Mormon: Mr. P. said he would not. Bro. Church then shewed that the design of the Mormons was not truth and religion, but empire, and pointed to the Nauvoo Legion with Lieut. General Joseph Smith at their head.

I have, in my earlier days, seen men cower at the approach of danger to their persons, but never did I see any poor soul in so much agony as was this poor Mormon.

He changed countenance almost every moment, and situation too. As brother Henry would say “the old Jerusalem bade (the Bible) is more powerful than the best Damascus.”

Our good Master’s work is going on here finely, we have baptized eleven very recently, among whom is a clerk in our Counting Room.--On Lord’s day we baptized 3-- the Baptists 8--all on the same day, in our beautiful Alleghenny and Monogahela. Oh! my dear brother how it gladdens my heart to see the good work going on. Your affectionate brother in the Lord.