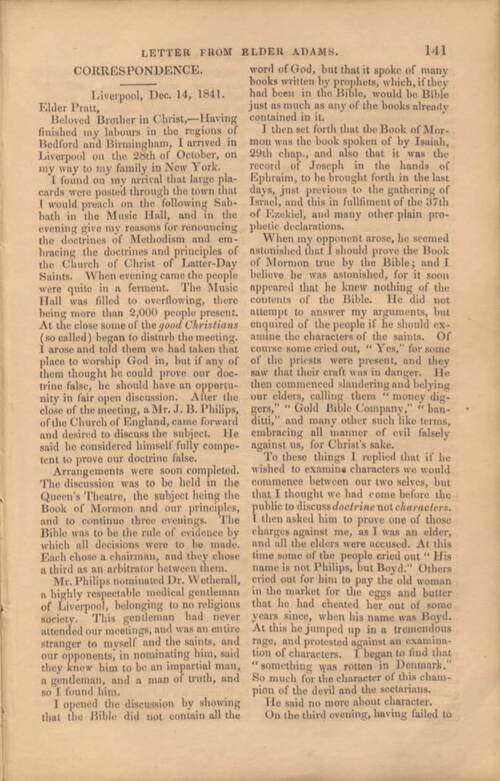 Beloved Brother in Christ,—Having finished my labours in the regions of Bedford and Birmingham, I arrived in Liverpool on the 28th of October, on my way to my family in New York.

I found on my arrival that large placards were posted through the town that I would preach on the following Sabbath in the Music Hall, and in the evening give my reasons for renouncing the doctrines of Methodism and embracing the doctrines and principles of the Church of Christ of Latter-Day Saints. When evening came the people were quite in a ferment. The Music Hall was filled to overflowing, there being more than 2,000 people present. At the close some of the good Christians (so called) began to disturb the meeting. I arose and told them we had taken that place to worship God in, but if any of them thought he could prove our doctrine false, he should have an opportunity in fair open discussion. After the close of the meeting, a Mr. J. B. Philips, of the Church of England, came forward and desired to discuss the subject. He said he considered himself fully competent to prove our doctrine false.

Arrangements were soon completed. The discussion was to be held in the Queen’s Theatre, the subject heing the Book of Mormon and our principles, and to continue three evenings. The Bible was to be the rule of evidence by which all decisions were to be made. Each chose a chairman, aud they chose a third as an arbitrator between them.

Mr. Philips nominated Dr. Wetherall, a highly respectable medical gentleman of Liverpool, belonging to no religious society. This gentleman had never attended our meetings, and was an entire stranger to myself and the saints, and our opponents, in nominating him, said they knew him to be an impartial man, a gentleman, and a man of truth, and so I found him.

I opened the discussion by showing that the Bible did not contain all the word of God, but that is spoke of many books written by prophets, which, if they had been in the Bible, would be Bible just as much as any of the books already contained in it.

I then set forth that the Book of Mormon was the book spoken of by Isaiah 29th chap., and also that it was the record of Joseph in the hands of Ephraim, to be brought forth in the last days, just previous to the gathering of Israel, and this in fullfiment of the 37th of Ezekiel, and many other plain prophetic declarations.

When my opponent arose, he seemed astonished that I should prove the Book of Mormon true by the Bible and I believe he was astonished, for it soon appeared that he knew nothing of the contents of the Bible. He did not attempt to answer my arguments, but enquired of the people if he should examine the characters of the saints. Of course some cried out, “Yes,” for some of the priests were present, and they saw that their craft was in danger. He then commenced slandering and belying our elders, calling them “Money diggers,” “Gold Bible Company,” “banditti,” and many other such like terms, embracing all manner of evil falsely against us, for Christ’s sake.

To these things I replied that if he wished to examine characters we would commence between our two selves, but that I thought we had come before the public to discuss doctrine not characters. I then asked him to prove one of those charges against me, as I was an elder, and all the elders were accused. At this time some of the people cried out “His name is not Philips, but Boyd.” Other cried out for him to pay the old woman in the market for the eggs and butter that he had cheated her out of some years since, when his name was Boyd. At this he jumped up in a tremendous rage, and protested against an examination of characters. I began to find that “something was rotten in Denmark.” So much for the character of his champion of the devil and the sectarians.

He said no more about character.

On the third evening, having failed to [141] disprove one of our principles, he, by the council of his sectarian friends, brought with him a glass of poison, and said if I would drink it they would all be Latter-Day Saints, although he had previously said that all our doctrines and principles came from hell. I replied, that I understood the Bible (not poison) was to be the rule of evidence, but if he would point out one single place in the New Testament where a servant of God ever drank poison to convince a set of ungodly infidels of the truth of the religion of the blessed Jesus, I would then be willing to do the same. This he failed to do, and being his last resourse, he lost the day. On a show of hands more than one half of the entire congregation held up their hands in our favour.

Dr. Wetherall decided that Mr. P. had failed to prove a single point against us, and said that I had proved every point, the Bible being the rule of evidence.

I would here state that the name of Mr. Wetherall deserves to be cherished by every lover of truth for his noble and disinterested conduct in this discussion, not because he gave his decision in our favour, but because that he throughout the discussion proved himself to be (“one of the noblest works of God”) an honest man.

After the above I continued labouring in the ministry in Liverpool for above four weeks, during which time I held two more discussions, one in the Hall of Science, with a Mr. M‘Instosh, a Socialist lecturer. This gentleman and his friends treated me with respect and kindness, aud I will say that as a people they acted much more Christian-like than any sectarian congregation I have seen since my arrival in England. My prayer is that they may be led into the truth.

A few days after the above a Mr. Brindley advertised to lecture against the Latter-Day Saints, and stated that any one was at liberty to speak three-quarters of an hour, and then he would reply. I went to hear his lecture; a clergyman of the Church of England took the chair. Mr B. then commenced slandering, misrepresenting, and, I believe, wilfully lying against the Saints in a most shameful manner. At the close, I arose and challenged him to meet me in a fair open discussion on equal terms. He avoided giving me an answer to the challenge, and himself, chairman, and party, treated me in the most shameful manner. The clergyman who presided proved himself to be a reverend liar, by stating that I should have an opportunity at the close of the meeting to put any question to Mr. Brindley that I wished. After the chairman and Mr. B. had both pledged their word to that effect, I waved the settling of the challenge until the close of the meeting; and then one of the most disagreeable scenes took place that I have witnessed, viz., they proved that one of our elders had prayed for a sick child, whose parents had no faith, and the child was not healed. This in their estimation proved the doctrine false. But the twelve apostles all tried to heal the sick in one instance, and could not, and Jesus told them that this kind cometh not out but by prayer and fasting. But if the Latter-Day Saints cannot cast out every kind without fasting or faith either, then they are considered impostors. After this they proved something still more wonderful, viz., that one of the Latter-Day Saints had died in London, and this (they said) proved clearly that we had not the gift of healing in the Church. Yet they are willing to admit that the former day saints had the gifts of healing, although they all died. Paul could advise Timothy to take a little wine for his stomach’s sake and his often infirmities—he could leave his fellow labourer at Milletus sick because he had not faith to be healed; but in this enlightened age every one must be healed, faith or no faith, and no one must die, or it proves us to be all imposters.

Well, as I before stated, Mr. B. and his chairman proved themselves guilty of the most wilful falsehood by denying me the privilege of saying one word. I told them of their promise, but they said they did not care, and [142] again forbid me saying another word on the platform.

On the following day they published that I should attend at the Theatre in the evening to prove that we could work miracles. This he did to get a full house and line his pockets by deception and lies.

On the following week I publicly challenged Mr. Brindley, or any sectarian priest in Liverpool, to discuss our principles, but no Mr. Brindley made his appearance, nor will he ever, for he is fearful to be tried by the word of God, knowing that it condemns him on almost every page.

Thus, you see, this mighty champion, this tool of sectarianism, dare not meet in fair open discussion, well knowing that if he should do so his iniquity and falsehood would be made manifest to all men.

I also held a discussion two evenings with a Mr. Stevenson, a Wesleyan minister, who treated me in a very gentlemanly manner, and acknowledged to the people that many of our principles were true, especially the gifts, blessings, and signs following the believers in all ages, in proof of which he quoted John Wesley’s notes on the New Testament, thereby proving that there are very few Wesleyan ministers in these days. The fact is they are almost all done away, as well as every thing else that is good. At the close of the discussion Mr. Stevenson did not wish a show of hands on the subject, but wished every one to judge for themselves.

On Sunday evening, Dec. 5th, I delivered my farewell address to the people of Liverpool.

It was on the subject of restoration. We had the largest congregation ever assembled in the hall with the saints. There was said to be two thousand five hundred people present. It was a time long to be remembered. At the close the whole congregation, with the exception of a dozen or two, arose and gave me their prayers or good wishes. Hundreds are believing, and may are being baptized from week to week—prejudice is giving way on every side, and the prospect brightens for a mighty ingathering of the honest in heart. The saints and friends have kindly supplied my temporal wants—my passage is now paid, and I expect to leave England to-morrow for New York; and in leaving this country, I bear my testimony that the saints in this land are a kind, warmhearted people. They have always ministered to my necessities, and their kindness will never be forgotten by me while heaven gives me intellect. My sincere prayer is that God may reward them for all their kindness to his servants.

I must now close by subscribing myself your friend and brother in the new and everlasting covenant,