Travels in the Great Western Prairies 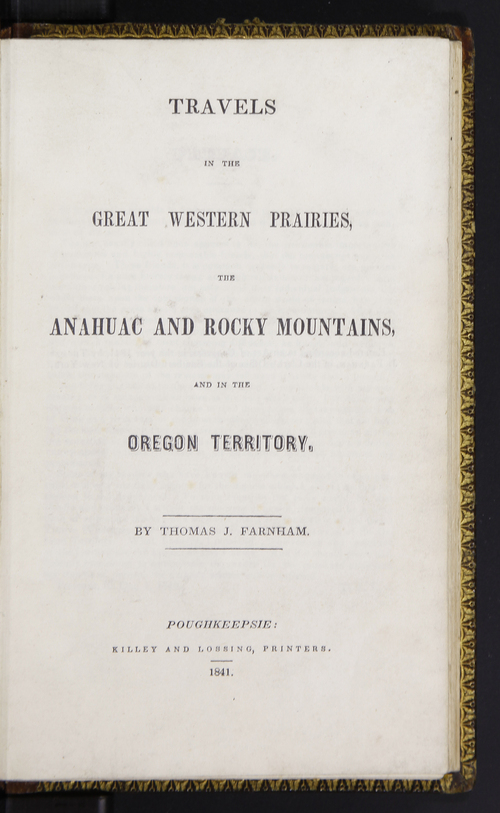 TRAVELS IN THE GREAT WESTERN PRAIRIES THE

AND IN THE OREGON TERRITORY.

. . . . It is but just, however, in noticing this sect of modern fanatics, to give their creed to the world as they themselves present it. A gentleman writes from Quincy, Illinois, to the editor of the Christian Register and Boston Observer, as follows: “Dear sir—In a discussion which has recently taken place between the orthodox of this place and the Mormons, I have been able to learn something from their preachers concerning their principles, that you and your readers may rely upon. They assert that the true “Church of Christ,” has been extinct ever since the Apostolical age, and is now, for the first time, revived in theirs. Hence they style themselves [8] “Latter-day Saints.”

Christian baptism is for the remission of sins. As all churches but theirs are labouring under “broken covenants,” their ordinances are worth nothing; for these, in order to be of any avail, must be administered by a regularly constituted priesthood. The Episcopal and Roman Catholic clergy, are mere pretenders to the Apostolical succession. Christian Apostleship ended with St. John, and was revived by Joseph Smith, Jr., in 1836 (“1826,”) which is the milenial era. To him was communicated a supplementary Revelation, recorded on brass (golden) plates, and called the Book of Mormon, purporting to have been written many hundred years ago, and brought to this country from Asia, by some Hebrew families. After long study, brother Joseph succeeded in translating the ancient record for the benefit of mankind. But they do not reject the Bible. Their church is organized, as they suppose, after the manner of the primitive church. They have twelve Apostles. After baptizing a convert for the remission of sins, which is done by immersion, they lay hands on him for the communication of the Holy Ghost. He is then supposed to possess all the miraculous gifts of the first Christians, though he may not exercise them. They claim the power, however, to work miracles, and to speak in an unknown tongue; which last I am ready to concede they sometimes do. But they contend that the primary use of miracles is not to give authority to a new Revelation, but to edify the church. To support this view, they quote Mark, chapter xvi. Verses 17, 18, Ephesians, chapter iv, verse 12. They claim to have communications from the heavenly world through angels. Their headquarters are at what was formerly called Commerce, now Nauvoo (a place of rest,) at the head of the Des Moines rapids, on the Mississippi, fifty miles north of Quincy. They have a population there as is said of nearly 3,000, and are going to run a candidate for the Legislature in August. They are making many proselytes in the southern States, and in England as well as in the West. Truth is mighty! so is error, &c.”

The origin of this “Book of Mormon,” was for some time a mystery. But recent developments prove it to have been written in 1812 by the Rev. Solomon Spaulding, of New Salem, in the State of Ohio. It was composed by that gentleman as a historical romance of the long extinct race who built the mounds and forts which are scattered over the valley States. Mr. Spaulding read the work while composing it to some of his friends, who, on the appearance of the book in print, were so thoroughly convinced of its identity with the romance of their deceased pastor, that search was made, and the original manuscript found among his papers. But there was yet a marvel how the work could have got into the hands of Joe Smith. On further investigation, however, it appeared that the Rev. author had entertained thoughts of publishing it; and, in pursuance of this intention, had permitted it to lie a long time at a printing office in which Sidney Rigdon, who has figured so prominently in the history of the Mormons, was at the time employed.

Rigdon, doubtless, copied poor Spaulding’s novel. And with it, and the aid of Joe Smith, has succeeded in building up a system of superstition, which, in vileness and falsehood, is scarcely equaled by that of Mahomet.

Solomon Spaulding was a graduate of Dartmouth college. . . .