The History and Antiquities of New England 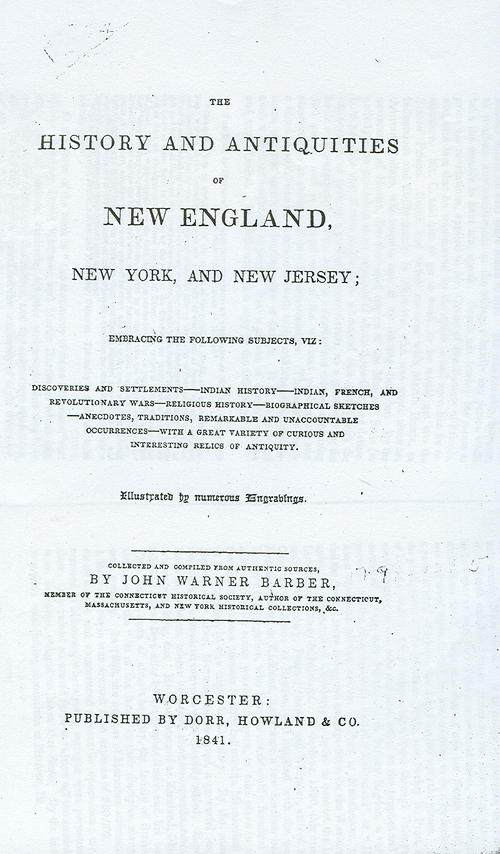 THE HISTORY AND ANTIQUITIES

OCCURRENCES—WITH A GREAT VARIETY OF CURIOUS AND

COLLECTED AND COMPILED FROM AUTHENTIC SOURCES,

Mormons.—Joseph Smith, the founder of Mormonism, as born, it appears, in Royalton, Vermont, and removed to Manchester, Ontario county, N. Y., about the year 1820, at an early age, with his parents, who were in quite humble circumstances. He was occasionally employed as laborer by persons in Palmyra, and was generally considered by them as a lazy, lounging sort of a boy; his education and natural abilities rather below mediocrity. Smith and his father were, according to the testimony of many respectable persons in Palmyra, persons of doubtful character, addicted to disreputable habits, and quite superstitious, believing in the existence of witchcraft, &c. They procured a mineral rod and made a business of digging in various places for money. Smith says, that when digging he has seen the pot or chest which contained the money, but was never fortunate enough to get it into his hands. He placed a singular sort [379] of a stone in his hat, and by the light of it, pretended to make many wonderful discoveries of gold, silver and other treasures deposited in the earth. Smith commenced his career as the founder of the new sect, when about the age of 18 or 19 years; he appointed a number of meetings in Palmyra, for the purpose of declaring the divine revelations which he said were made to him. He was not able, however, to produce any excitement in the village; hardly any person would take the trouble to hear him speak. Smith not having the means to print his revelations, applied to Mr. Crane of the Society of Friends, and told him that he was moved by the spirit to call upon him for assistance. Mr. C. told him to go to work, or he would get into the States’ Prison. Smith had better success with Martin Harris, an industrious and thrifty farmer in Palmyra, who was worth about ten thousand dollars, who became one of his leading disciples. By the assistance of Harris, five thousand copies of the Mormon Bible (so called) were published at an expense of about three thousand dollars. It is possible that Harris might have advanced this money with the expectation of making a profitable speculation, as a great sale for the book was anticipated. This book is a duodecimo volume, containing 590 pages, and is perhaps one of the weakest productions ever attempted to be palmed off as a divine revelation. The book is mostly a blind mass of words, interwoven with scriptural language and quotations, without much of a leading plan or design. It is, in fact, just such a book as might be expected from a person of Smith’s abilities and turn of mind. The following is a copy of the title page: . . .

At the close of the book is “the testimony of three witnesses,” viz: Oliver Cowdery, David Whitmer, and Martin Harris, in which they state unto all nations, kindreds, tongues and people, that they have seen the plates containing the record, and the engravings upon them, &c. On the last page is contained the testimony of eight witnesses, of which the following is a copy. . . . [380]

Smith, in the Preface of the book, states that the plates of which have been spoken were found “in the township of Manchester, Ontario county, New York.” It is stated by persons in Palmyra, that when Smith exhibited these plates to his followers, they were done up in a canvas bag, that if they uncovered them, the Almighty would strike them dead. It is said that no one but Smith could read what was engraved upon them; he was enabled to do it by looking through a peculiar kind of spectacles found buried with the plates. Soon after the publication of the Mormon Bible, one Parley B. Pratt, a resident of Lorrain county, Ohio, happening to pass through Palmyra, on the canal, hearing of the new religion, called on the prophet and was soon converted. Pratt was intimate with Sidney Rigdon, a very popular preacher of the denomination called “Reformers” or “Disciples.” About the time of the arrival of Pratt at Manchester, it appears that the Smiths were fitting out an expedition for the Western country, under the command of Cowdery, in order to convert the Indians or Lamanites, as they called them. In October, 1830, this mission, consisting of Cowdery, Pratt, Peterson and Whitmer, arrived at Mentor, Ohio, the residence of Rigdon, well supplied with the new Bibles. Near this place, in Kirkland, there were a few families belonging to Rigdon’s congregation, who became considerably fanatical and were daily looking for some wonderful event, to take place in the world. Seventeen of these persons readily believed in Mormonism and were all re-immersed, in one night, by Cowdery. By the conversion of Rigdon, soon after, Mormonism received a powerful impetus, and more than one hundred converts were speedily added. Rigdon visited Smith at Palmyra, where he tarried about two months, receiving revelations, preaching, &c. He then returned to Kirkland, Ohio, and was followed a few days after by the prophet Smith and his connections. Thus from a state of almost beggary, the family of Smith were furnished with the “fat of the land” by their disciples, many of whom were wealthy. In 1833, the number of Mormons amounted to 1200. A Mormon temple was erected at an expense of $50,000. They also set up a bank and commenced mercantile operations; most of them removed to Missouri, where many outrages were perpetrated against them; they raised an armed force to “drive off the infidels.” They were, however, obliged to leave that State. By the last accounts, they were establishing themselves at Nauvoo, Ill.