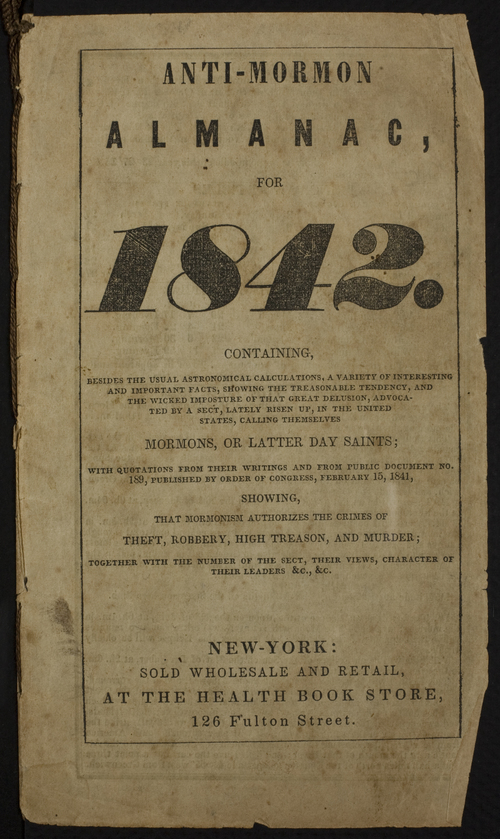 CONTAINING BESIDES THE USUAL ASTRONOMICAL CALCULATIONS, A VARIETY OF INTERESTING AND IMPORTANT FACTS, SHOWING THE TREASONABLE TENDENCY, AND

THE WICKED IMPOSTURE OF THAT GREAT DELUSION, ADVOCATED BY A SECT, LATELY RISEN UP, IN THE UNITED STATES, CALLING THEMSELVES MORMONS, OR LATTER DAY SAINTS; WITH QUOTATIONS FROM THEIR, WRITINGS AND FROM PUBLIC DOCUMENT NO.

THAT MORMONISM AUTHORIZES THE CRIMES OF

THEFT, ROBBERY, HIGH TREASON, AND MURDER; TOGETHER WITH THE NUMBER OF THE SECT, THEIR VIEWS, CHARACTER OF THEIR LEADERS &c., &c.

SOLD WHOLESALE AND RETAIL, AT THE HEALTH BOOK STORE

. . . The Indian’s opinion of the book of Mormon.—An old Indian having attended a Mormon meeting, and heard one of its advocates extol Mormonism; was requested to give his opinion of its merits. He began by detailing the great good which had been done by the Bible, of which God was the author. And, said he, the devil, seeing this, determined, that he, also, would have a Bible of his own, and, accordingly, he wrote the book of Mormon. But, on examination he felt ashamed of his work, and so he hid it, in Ontario County, N. Y. But Jo Smith dug it up, and published it as a revelation from God!