Wholesale Conversion of Methodists to Infidelity 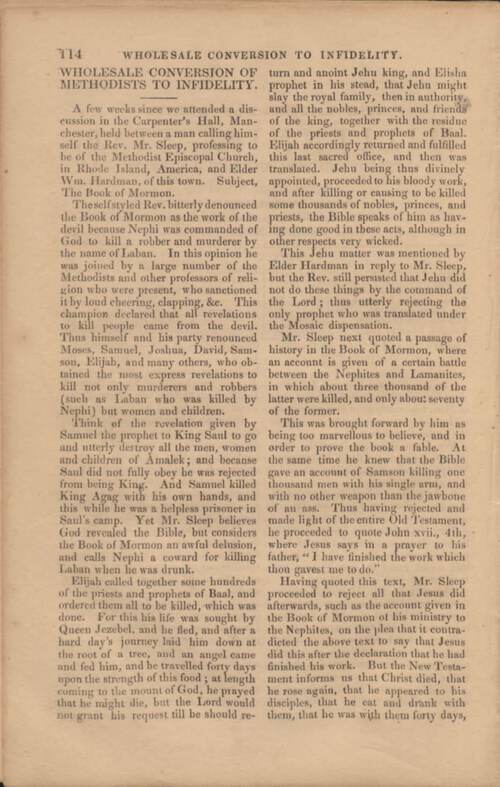 WHOLESALE CONVERSION OF METHODISTS TO INFIDELITY.

A few weeks since we attended a discussion in the Carpenter’s Hall, Manchester, held between a man calling himself the Rev. Mr. Sleep, professing to be of the Methodist Episcopal Church, in Rhode Island, America, and Elder Wm. Hardman, of this town. Subject, The Book of Mormon.

The self styled Rev. bitterly denounced the Book of Mormon as the work of the devil because Nephi was commanded of God to kill a robber and murderer by the name of Laban. In this opinion he was joined by a large number of the Methodists and other professors of religion who were present, who sanctioned it by loud cheering, clapping, &c. This champion declared that all revelations to kill people came from the devil. Thus himself and his party renounced Moses, Samuel, Joshua, David, Samson, Elijah, and many others, who obtained the most express revelations to kill not only murderers and robbers (such as Laban who was killed by Nephi) but women and children.

Think of the revelation given by Samuel the prophet to King Saul to go and utterly destroy all the men, women and children of Amalek; and because Saul did not fully obey he was rejected from being King. And Samuel killed King Agag with his own hands, and this while he was a helpless prisoner in Saul’s camp. Yet Mr. Sleep believes God revealed the Bible, but considers the Book of Mormon an awful delusion, and calls Nephi a coward for killing Laban when he was drunk.

Elijah called together some hundreds of the priests and prophets of Baal, and ordered them all to be killed, which was done. For this his life was sought by Queen Jezebel, and he fled, and after a hard day’s journey laid him down at the root of a tree, and an angel came and fed him, and he travelled forty days upon the strength of this food; at length coming to the mount of God, he prayed that he might die, but the Lord would not grant his request till he should return and anoint Jehu king, and Elisha prophet in his stead, that Jehu might slay the royal family, then in authority and all the nobles, princes, and friends of the king, together with the residue of the priests and prophets of Baal. Elijah accordingly returned and fulfilled this last sacred office, and then was translated. Jehu being thus divinely appointed, proceeded to his bloody work, and after killing or causing to be killed some thousands of nobles, princes, and priests, the Bible speaks of him as having done good in these acts, although in other respects very wicked.

This Jehu matter was mentioned by Elder Hardman in reply to Mr. Sleep, but the Rev. still persisted that Jehu did not do these things by the command of the Lord; thus utterly rejecting the only prophet who was translated under the Mosaic dispensation.

Mr. Sleep next quoted a passage of history in the Book of Mormon, where an account is given of a certain battle between the Nephites and Lamanites, in which about three thousand of the latter were killed, and only about seventy of the former.

This was brought forward by him as being too marvellous to believe, and in order to prove the book a fable. At the same time he knew that the Bible gave an account of Samson killing one thousand men with his single arm, and with no other weapon than the jawbone of an ass. Thus having rejected and made light of the entire Old Testament, he proceeded to quote John xvii., 4th, where Jesus says in a prayer to his father, “I have finished the work which thou gavest me to do.”

Having quoted this text, Mr. Sleep proceeded to reject all that Jesus did afterwards, such as the account given in the Book of Mormon of his ministry to the Nephites, on the plea that it contradicted the above text to say that Jesus did this after the declaration that he had finished his work. But the New Testament informs us that Christ died, that he rose again, that he appeared to his disciples, that he eat and drank with them, that he was with them forty days, [114] that he taught them, commissioned them, opened to them the Scriptures, exhorted them to feed his sheep, made them promises, &c., thus accomplishing the principal work of redemption, and all this after he had uttered the sentence that he had finished his work, as quoted by Mr. S. Now all these things that Jesus did, on which all Christendom depend for salvation, was openly rejected by Mr. Sleep and his party, because performed after he had finished his work.

The Saints present were so astonished to hear a Methodist preacher in the midst of loud cheering from his friends openly renounce and reject the New Testament, with all the sufferings and death of Christ, and all the glories of his resurrection, for the sake of destroying the Book of Mormon, that they would have gladly replied, but this was utterly impossible, for the people were infuriated with the spirit of infidelity to that degree that no reply could be heard, even if it were to save the Old and New Testaments, Book of Mormon, or even the world, from oblivion.

Some stranger present (perhaps an Owenite) raised his voice in the midst of the confusion, and was heard by a few, endeavouring to reprove them for their ill behavior and rash treatment of the sacred books, but his voice was soon lost amid the savage yells, and thus the meeting concluded.

Now, whether Mr. Sleep and his party, after having rejected the Old and New Testaments, and Book of Mormon, will join the Owenites, or whether they will organise a new party, and set up for themselves under a new title, such as Evangelical Infidels, we know not; but certain it is that they cannot consistently profess to have any thing more to do with Moses, Christ, or Mormon.

We do not wish these remarks to be taken as any thing in disrespect of the Owenites, for we respect many of them as honest unbelievers, and feel assured that they will rather have cause to mourn than rejoice at the conversion of so many inconsistent professors of religion who are coming to join the standard of the disbelievers in all revelation.—ED.